California Highway Patrol said 32 people were arrested and cited for violated a public health order, and one person was booked into the Sacramento County Jail. 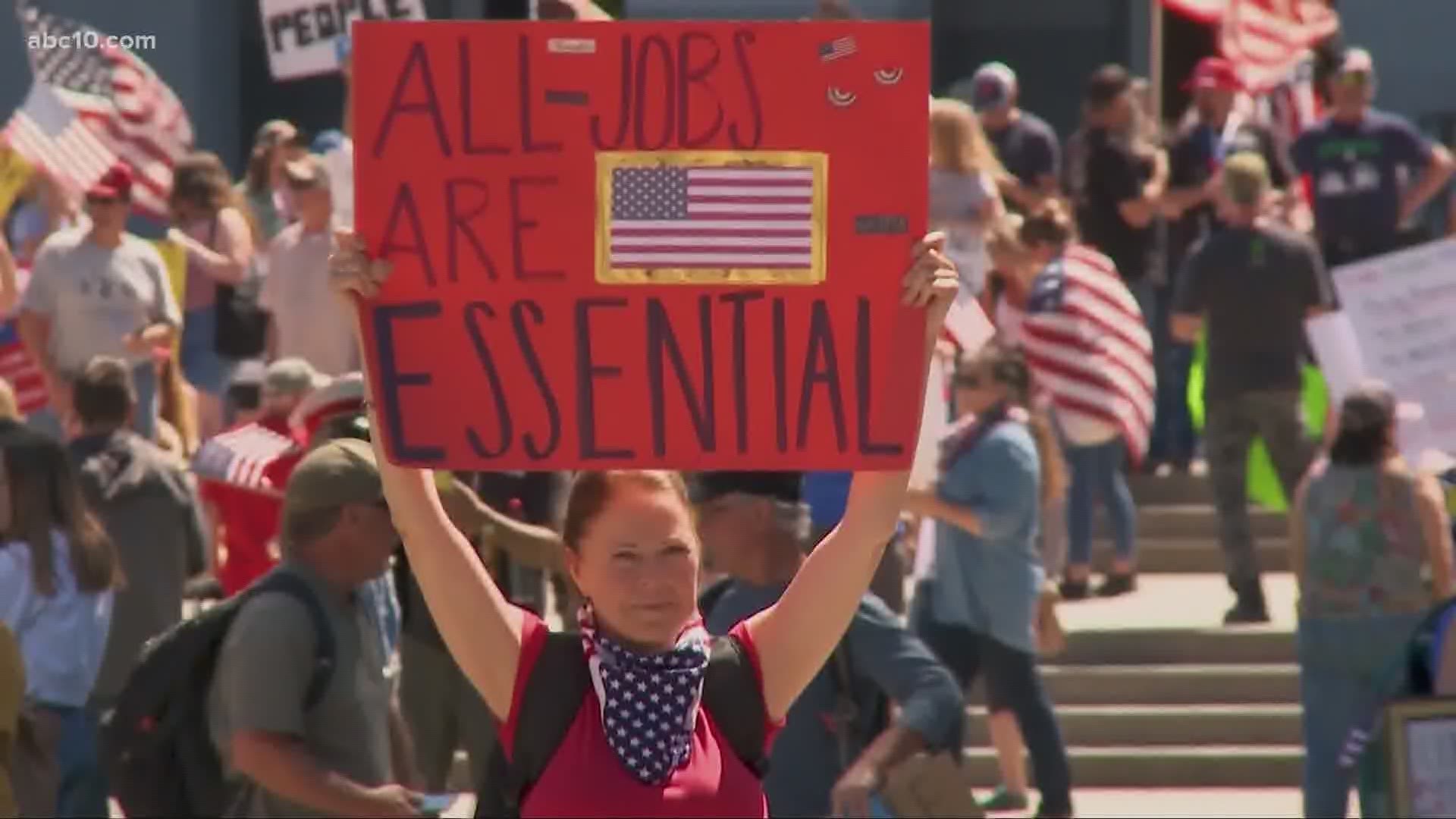 SACRAMENTO, Calif. — Dozens of people were cited and at least one person was jailed Friday afternoon after hundreds of demonstrators stormed California's Capitol to protest the state's stay-at-home orders.

Protesters took to the streets demanding the state loosen stay-at-home guidelines issued by Governor Gavin Newsom in March to mitigate the spread of the novel coronavirus.

California Highway Patrol Assistant Chief Josh Ehlers said 32 people were arrested and cited for violated a public health order, and one person was booked into the Sacramento County Jail.

"We are staunch supporters of people's first amendment rights but we want them to do things safely," Ehlers said.

Ehlers said the mass gathering was unsanctioned, and with the crowd getting too massive they were forced to move protesters to the sidewalk.

Last week, after a similar protest against stay-at-home orders that saw hundreds of people not following public safety guidelines, CHP announced that it would no longer issue permits for rallies on Capitol grounds while the public health order is still in place.

Greg Schmidt, an organizer of the so-called "Operation May Day" protest said people gathered to force Newsom to reopen the state, despite the coronavirus pandemic.

"Are we going to put all these people at risk of losing their livelihood, losing their homes, the stress and anxiety of destroying an economy for the possibility of a virus killing a few more people," Schmidt asked rhetorically.

1 / 18
AP
A protester, center, is detained by California Highway Patrol officers during a demonstration against Gov. Gavin Newsom's stay-at-home orders, at the Capitol in Sacramento, Calif., Friday, May 1, 2020. Several people were taken into custody during the protest calling for Newsom to end the restrictions and allow people to return to work. (AP Photo/Rich Pedroncelli)

Schmidt posted an open letter to Newsom about the matter on Facebook, arguing that the virus is not a bigger threat than millions of people being out of work.

In California, about 3.8 million people have filed for unemployment since the state closed down except for essential workers and businesses.

"There's no reason for this quarantine," Schmidt said. "It's now become something of a political issue and the governor has basically gone rogue. We were told that we had a pandemic that had exponential growth. That never happened in California."

RELATED: 'Some of California's fairs will be forced into closure' | Why some fairs won't make it to 2021

But despite the large crowds at protests across the state on Friday, critics of reopening state — including Newsom — say it's far too early to do so, because it would cancel out the work the Californians have already done to keep the virus mitigated.

At last count, at least 50,442 people in California — the country's most populated state — have tested positive for the virus, and 2,073 people have died. Newsom and others say those low numbers in the state are because social distancing worked to save lives.

Schmidt argues that Californians came together for the greater good of the state and stayed home, but now it's time to open. 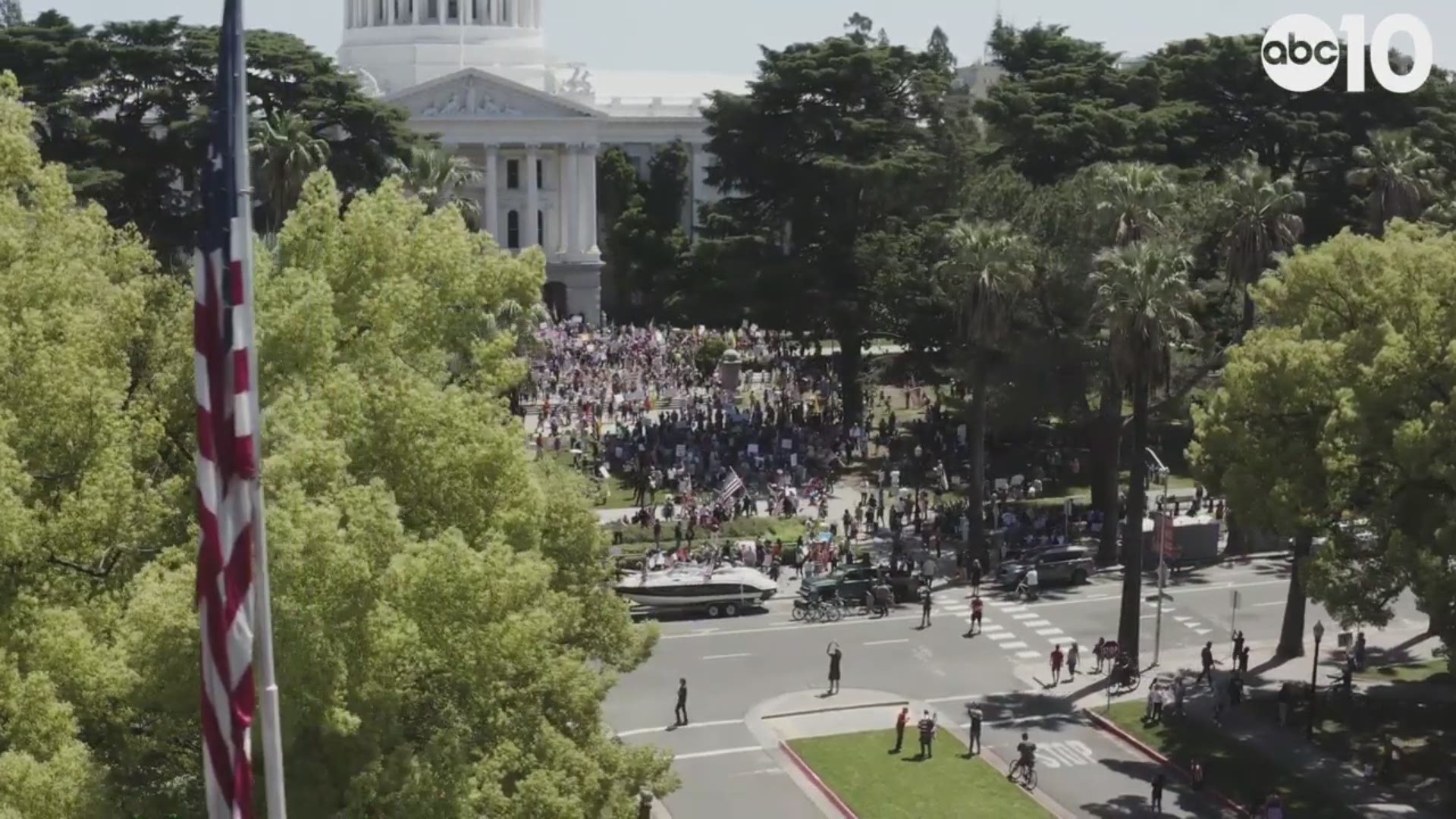 "We need to get back to work and if you feel you're at risk — mask up or don't go out, but you can't stop the rest of the economy from living. That's not the answer," Schmidt said. "You don't know who has it or who doesn't have it and you're never going to know. That's the problem. You're never going to know, but you don't lock down society — as a whole."

Rosemary Robinson, who joined the unauthorized protest on Capitol grounds, said people should be allowed to have more autonomy over what they can do during the pandemic.

"I think we are all capable of taking care of ourselves," Robinson said. "It’s our right and freedom ,our right of choice if we are in fear that’s perfectly fine they can stay home."

An ABC News poll shows most people are still uncomfortable in public places. The poll finds that 80% of respondents are unlikely to go out to public places like restaurants, movie theaters, churches, and sporting events, even if restrictions on public activity were lifted at this time.

"It's irresponsible, because there is another way to protest," Steinberg said. "Drive around the Capitol. Honk your horn. It's just not acceptable when you flagrantly violate the public health."