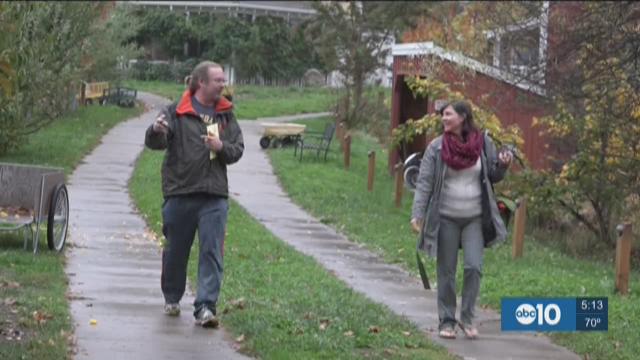 Imagine a community where neighbors know each other, kids play outside together until it’s time for dinner … and when that time comes, dinner is cooked and ready on the table.

It sounds like the suburban dream of a 1950’s sitcom. But residents in a Northern California cohousing community say this is their daily experience.

“The people living here are people I can call on in an emergency and look to take me to the hospital,” Nevada City Cohousing resident Robert Zeuner said. “On a day-to-day basis, [it’s] just saying hello, good morning. It’s nice to see people giving you a smile and saying, ‘Good morning, how was your night?’”

Nevada City Cohousing was completed in 2006 by The Cohousing Community/McCamant and Durrett Architects. Katie McCamant and Charles Durrett, a husband-and-wife team, have been building cohousing communities in the U.S. since 1991, after seeing the idea in action in Copenhagen. Durrett says they’ve built 55 communities so far across 25 states.

The first is that residents play a role in the creation of the community, guiding both the design and the pricing. Second, the communities are designed to facilitate, well, a sense of community. Cars are parked around the perimeter of the community, to encourage walking between structures (which then encourages stopping to talk to neighbors).

Third, while cohousing residents own their individual homes (which have private kitchens, living areas and bathrooms), they share many amenities. At Nevada City Cohousing, there’s a pool, a kids’ play room, a music room with a piano, and a shared laundry room.

Last, the communities are all self-managed. All adults sit on the co-op board, and residents are expected to take part in caring and maintaining for the community.

Residents describe a community in which they feel comfortable letting their kids out the front door to play with their neighbors.

“Calling the kids in for dinner can be challenging, because they’re having so much fun they don’t want to come home,” Carlyle Miller said about her two daughters. “So carving out that family time can be more challenging, but we’ve found ways to deal with that.”

Durrett said he and McCamant couldn’t have imagined raising their daughter in another environment.

“Parents can provide only so much guidance and fulfill only so many curiosities. But what Jessie learned from playing with lots of kids just outside the door, what she learned from lengthy conversations with their parents, endless sports with neighbors …. If people only knew what cohousing offered their kids, they would be there,” Durrett said in an email.

Others say the cohousing lifestyle serves as an antidote for cultural problems like misunderstanding and intolerance. Residents are expected to cook one common meal per month, so they’re breaking bread with neighbors at least that often.

“In all honesty, there’s one person that if I never crossed paths with them again, that’d be alright with me,” resident Ellen Fietz Hall said. “But even people that left because it wasn’t the right fit for them, or people I had really large disagreements with, there was something else about them I really enjoyed.”

Durrett added that the homes, which have smaller footprints than many typical houses, also provide an affordable option for many people who would otherwise be priced out of their cities.