As exchanges heated up in the Sacramento City Council meeting, Laura Byrd spent her time outside trying to help calm down an overflow crowd. 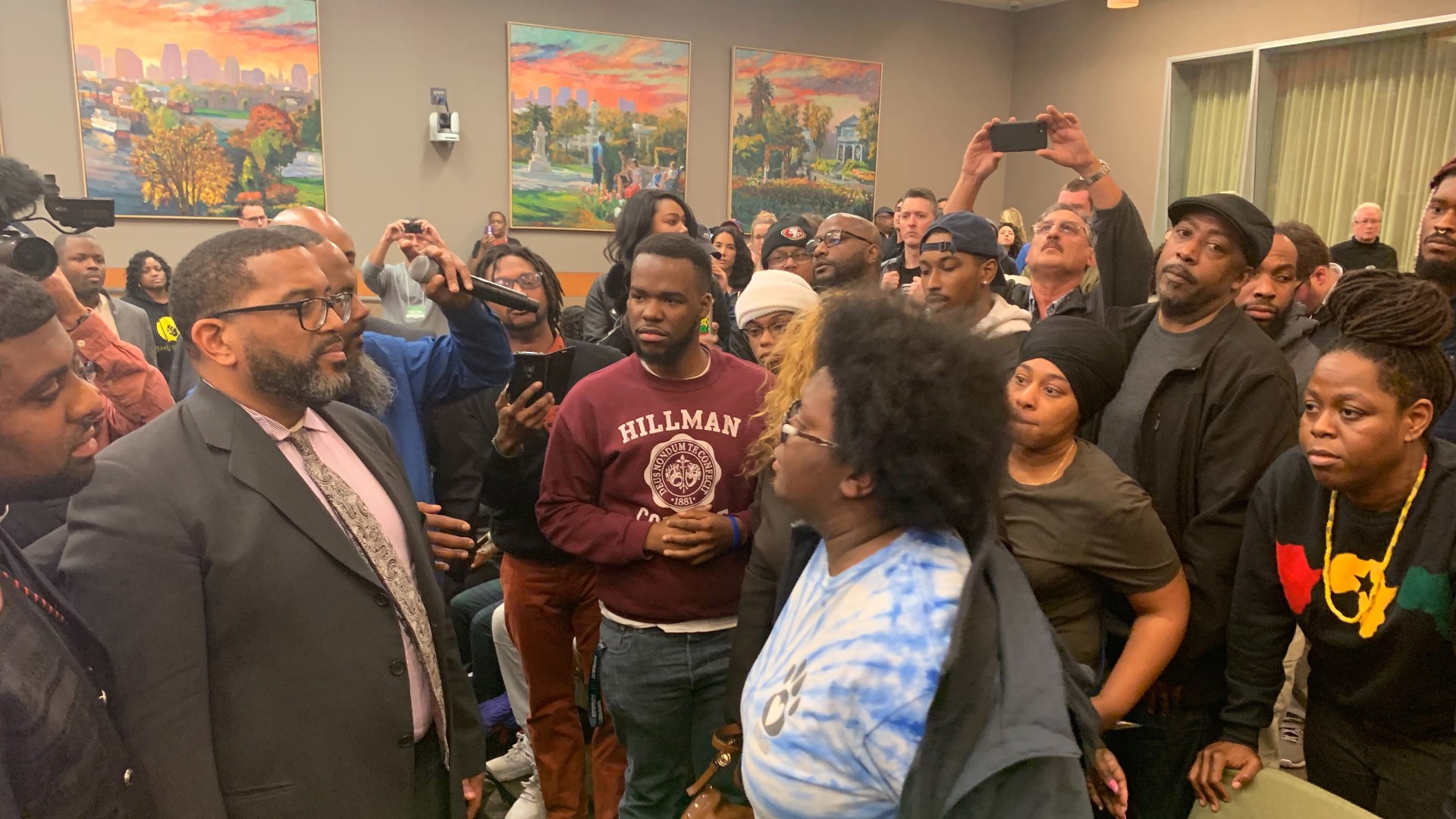 Emotions ran high in a near four-hour Sacramento City Council meeting, one day after 84 people got arrested during a protest over District Attorney Anne Marie Schubert's decision not to charge the two officer who fatally shot Stephon Clark.

An overflow crowd arrived at the City Council Chambers to speak out on the response and arrests.

Laura Byrd, was part of the overflow crowd outside the building. She said she was trying to be a calming, grandmotherly presence among some heated emotions.

“I’m trying to calm things down to a little bit, because I don’t anyone to get in trouble or to get injured, after last night,” she said.

At least twice in the night, the meeting threatened to end early before it finally ended abruptly near the four mark. At one point, the council meeting was forced into a recess as an impassioned speaker and attendees left their seats, filling the front of the chambers.

“My problem is that the passion won’t change things; we need to make a change for good, and that means change people’s hearts, not just their minds,” Byrd said.

“The fact that we can do this outside [gather and support one another]- why can’t we as a community get together with our leadership and do this as a country?" she questioned. "All we’re asking for is equal access, equal opportunities and for everybody to be given an opportunity to live and to respect humanity.”

Blu Buchanan, another attendee in the overflow crowd, reasoned that one of the most important things about the night was the coalition building among the people who showed up to the council meeting.

"Some people are coming from different organizations that haven’t been connected before, and getting us all in one place, talking about the same thing means that we have the power to make the decisions around our community: self-determination and community safety,” Buchanan said.

If viewing on the ABC10 app click HERE for multimedia

A near four hour City Council meeting came to an abrupt end after 47 speakers approached the council, many speaking about the Monday night protests that resulted in 84 arrests.

The meeting teased an early ending at least twice earlier in the night, however, the it was able to find its way back on track.

After nearly four hours, a final speaker claiming to have one sentence left in her remarks continued past her time, even after being notified of her time limit.

Mayor Steinberg called it a night as the speaker continued her remarks, despite the notice. The meeting was adjourned suddenly, ending a four hour marathon public comment period filled with heated remarks and passionate speakers.

One of the speakers said a person with a MAGA hat tried to inflame a situation with the protesters.

After his brief remarks, a previous speaker attempted to speak to the City Council again, out of turn after he reached his time.

A heated exchange came about when the mayor refused to allow it. Mayor Steinberg threatened to recess the meeting unless the previous speaker took his seat.

"I will recess this meeting in 30 seconds if you don't sit down," said Mayor Steinberg.

When the Sacramento City Council meeting started around 5 p.m., there were 45 speakers slated to speak. As of 7:54 p.m., there still remains about 17 speakers left.

Reverend Shane Harris takes the podium to speak to the Sacramento City Council.

"I want to say that a year ago, where we were, we are back here again. Why are we back here again because last night over 80 people were peacefully protesting... were arrested and taken into detainment. Enough is enough," said Reverend Shane Harris.

Harris says locally and nationally his organization is ready to mobilize, claiming that local prosecutors investigating local police is a conflict of interest.

Harris said that he and the family of Stephon Clark want the following:

"California needs to set a precedent, and Sacramento needs to lead it," exclaimed Harris.

"We can't have what just happened, happen again," said Mayor Steinberg. "In other words, we're okay."

The mayor said he wants to hear from everybody as the Sacramento City Council reconvened.

A heated exchange forced a recess in the City Council Chambers as an impassioned speaker and multiple attendees left their seats, flooding the front of the chambers with chants.

The mayor put the meeting into recess until the scene calmed down.

An impassioned speaker has pushed the Sacramento City Council Chambers into a recess.

After speaking passed his time limit, criticizing leadership, and responses got heated after Mayor Steinberg asked the speaker to watch his language.

He walked away from the podium claiming that leadership didn't care about Stephon Clark. After calling for the next speaker, the man continued to speak, as he paced around the area.

Multiple calls to leave the speaker alone eventually led to the man climbing on top of the structure as multiple people left their seats and flooded to the front of the room.

Mayor Steinberg called for a recess after multiple chants broke out and people left their seats. The recess was called for as long as it takes for the scene to calm down.

A speak, identified as Conrad Krump said that thinking about last night made him think about the way he and black people are trapped.

He reflected claims that people were trapped from multiple directions during last night's protest with claims that black people are trapped economically, politically, academically, and socially in the city.

He wanted people to know that there are a group of people trying to do things right and "seek justice" but the City displays an unwillingness to care makes that group wonder why they are here.

Despite the added minute, speakers continue to need more time.

Per ABC10's Liz Kreutz Chief Hahn noted that the 84 arrests were unusual for the City, however, he did not add much more to that comment.

The majority of speakers at the meeting so far have been commenting on the Monday night protests and the police response.

Some shouting has happened at the meeting, prompting the Mayor Darrell Steinberg to respond.

Speakers have been given an extra minute to speak, however, some have been allowed to go over.

The Sacramento City Council meeting is at a max capacity of 203, and still nearly 50 people are standing outside City Hall as they watch the meeting on video screens.

Many of the people attending the meeting are here regarding the Monday night protests. At least one has argued that the protest would have been entirely peaceful if Sacramento police hadn't shown up at all.

45 speakers have lined up for public comment after a Monday night protest resulted in 84 arrests.

A protest march went through East Sacramento on Monday night after the Sacramento County District Attorney's decision to not charge the officers involved in the shooting death of Stephon Clark.

Mayor Steinberg added an extra minute to speaking time for the meeting.

Several community and religious leaders have gathered for the meeting include Les  Simmons who was arrested during the Monday night protest.

Sacramento Police Chief Daniel Hahn said an update on the protest will be available in a few weeks as they download the the body cameras. However, he did say there was some property and damage and reports of flames.