Protesters decrying this week's fatal shooting of an unarmed black man marched from Sacramento City Hall and onto nearby I-5 Thursday, disrupting rush hour traffic. 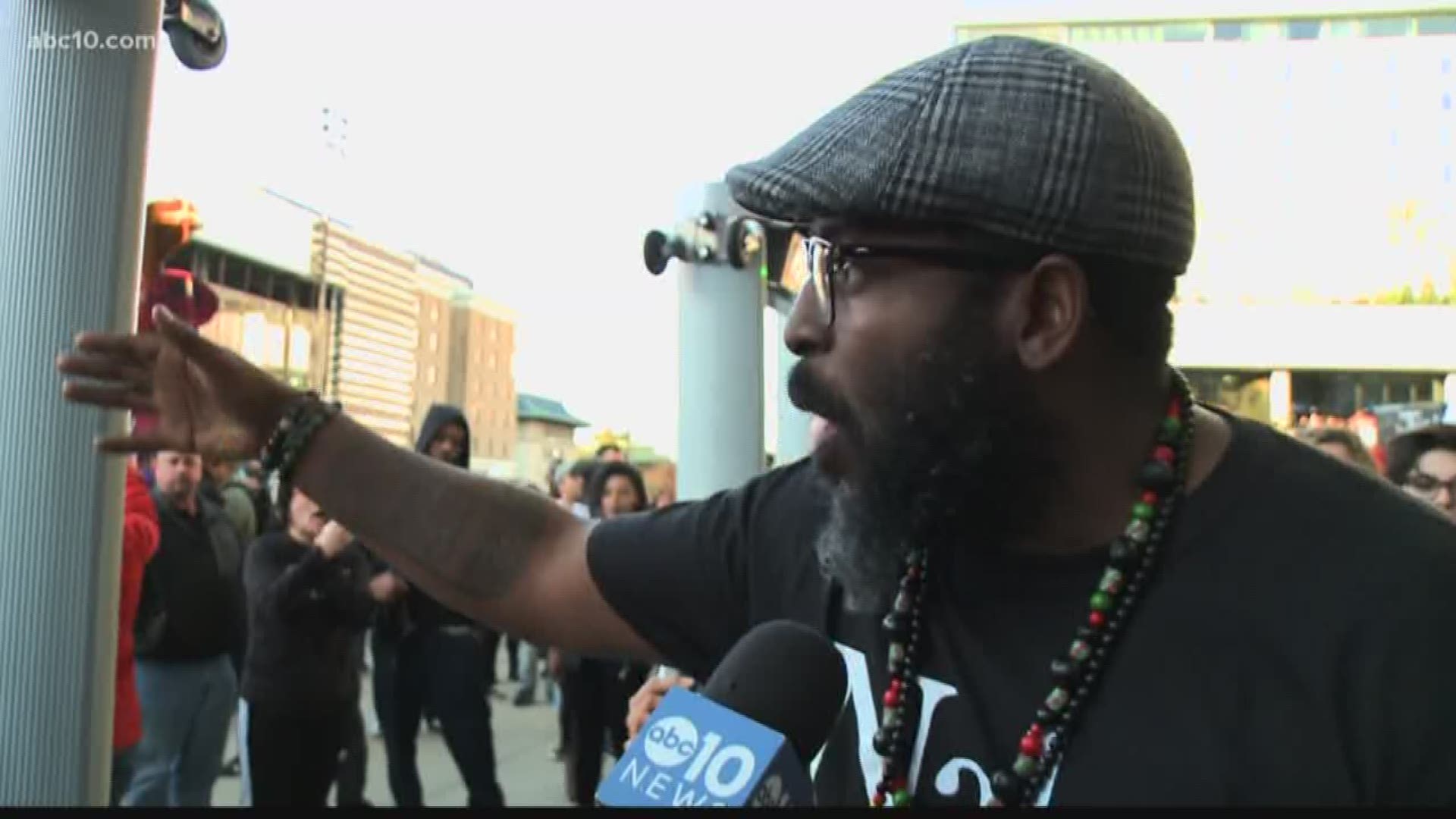 According to the Sacramento Police, there have been no arrests made.

SACRAMENTO, Calif. (AP) — Protesters decrying this week's fatal shooting of an unarmed black man marched from Sacramento City Hall and onto a nearby freeway Thursday, disrupting rush hour traffic and holding signs with messages like "Sac PD: Stop killing us!"

Hundreds of people rallied for Stephon Clark, a 22-year-old who was shot Sunday in the backyard of his grandparents' home. Police say they feared he had a handgun when they confronted him after reports that he had been breaking windows in the South Sacramento neighborhood.

But police found only a cellphone.

"We are at a place of deep pain" because of recent violence directed at black people in Sacramento and elsewhere," said the Rev. Les Simmons, a community leader. He said the city's first black police chief, Daniel Hahn, is doing what he can but protested the actions of Hahn's officers.

Clinton Primm said he was friends with Clark for about six years and fears others are also at risk at being shot by police.

"He was a great dad," he recalled of Clark, the father of sons ages 1 and 3. "He loved both of them to death."

"I'm fed up with this," she said at the protest. "I feel like our lives don't matter to them."

Sacramento Mayor Darrell Steinberg earlier said he was horrified but won't second-guess the "split-second decisions" of the officers. He praised Hahn for quickly releasing videos of the shooting and said the department has improved its policies since the fatal shooting of a mentally ill black man in 2016.

But independent experts said the footage from body cameras and an overhead helicopterraises more questions than it answers.

The officers appeared to believe they were in danger, they said, and if so the shooting was likely legally justified.

One officer is heard "doing a mental inventory to make sure there's no holes in his body" because the officers appear to think Clark may have shot at them and missed, said Peter Moskos, a former police officer and assistant professor in the Department of Law and Police Science at John Jay College of Criminal Justice.

But Geoffrey Alpert, a professor of criminology at the University of South Carolina and an expert on police use of force, said the officers may have a tough time explaining why they jumped to the conclusion that Clark had a gun.

He also questioned why an arriving backup officer had the two original officers turn off the microphones on their body cameras, eliminating what he called "important evidence."

In an ideal world, the two officers should have immediately provided first aid instead of waiting five minutes for backup, said Eugene O'Donnell, a professor of police studies at John Jay College of Criminal Justice. "But that could be more the product of hope than reality," he said, with the officers still in shock and worried about their own safety.

The Sacramento Police Department said officers were responding to reports of a man seen breaking into at least three vehicles and later into a neighbor's home. The police said deputies in the helicopter saw Clark break a neighbor's sliding glass door before jumping a fence.

As a result, "their threat radar is really high," said Plumas County sheriff's deputy and special prosecutor Ed Obayashi, who trains officers and testifies in court on police use of force.

"They have to assume that their lives are in danger at that very second," he said.

SACRAMENTO, Calif. (AP) — Community members and activists are gathering at Sacramento City Hall on Thursday to protest the fatal shooting of an unarmed black man by police.

Black Lives Matter Sacramento is organizing the rally in honor of Stephon Clark, a 22-year-old who was shot Sunday night in his grandparents' backyard, where he was staying.

The two officers yelled that they thought he had a gun in the moments before they shot him, according to audio from body camera footage released Wednesday by Sacramento police. But Clark was only holding a cellphone.

Footage from body cameras and an overhead helicopter does not clearly depict what Clark was doing just before police opened fire. Officers did not find a gun at the scene.

The Sacramento Police Department said they were responding to reports of a man seen breaking into at least three vehicles and later into a neighbor's home. The break-ins were first reported by a 911 call also released by the police.

The police said deputies in the helicopter saw Clark break a neighbor's sliding glass door before jumping a fence. The helicopter video does not show the alleged break-in. It picks up as he is running through a backyard and climbing over a fence into a neighboring property. It shows him looking into a truck in the driveway.

The helicopter, flying over the house, then loses sight of the man. It briefly shows him in the backyard as the police are running up the driveway along the side of the house.

"Show me your hands — gun!" one officer yells, according to the body camera footage released Wednesday. It is dark outside and a flashlight from one body camera briefly shows the backyard, but the man is not visible. "Gun, gun, gun," one of the officers yells before they begin shooting.

The helicopter footage shows Clark collapsing as they shoot. It's unclear from the helicopter and body camera video exactly how many shots were fired. Police previously said the officers fired 20 shots.

The department had said he advanced toward the officers holding an object extended in front of him. The officers thought he was pointing a handgun, police said.

After the shooting, the footage shows the officers taking turns reloading and keeping their guns trained on the man from a distance while they await backup.

When backup arrives, one of the officers who fired says, "We can't see his left hand." Someone suggests getting a nonlethal weapon before approaching.

"Let's hit him a couple of times with that before we uh--" the officer says, though it appears the suggestion was heeded.

"What'd he have on him?" someone asks.

"Something in his hands, it looked like a gun from our perspective," one officer says.

As several officers approach, the man is seen lying face down with a cellphone near his head. He's handcuffed and the officers discuss performing CPR.

The officers who fired are taken to the street, where someone says "Hey mute" and the audio cuts out. The video continues without sound for about two minutes as the officers talk.

"Based on the videos alone, I cannot second guess the split-second decisions of our officers and I'm not going to do that," Mayor Darrell Steinberg said in a statement. "The investigation must be completed. We need more information in addition to the video before we can render any final conclusions."

Steinberg said appropriate questions have been raised about the protocols for using force and rendering emergency aid during police shootings and they must be answered in the investigation.

The shooting has ignited questions by relatives, activists and others after it turned out he was holding only a cellphone.

The department said the two officers have been with Sacramento police for two and four years, but each has four years' previous experience with other law enforcement agencies. Both are on paid administrative leave.

WATCH FOR YOURSELF THE RAW VIDEO OF THE SHOOTING