The deaths of Stephon Clark and Joseph Mann in Sacramento sparked massive unrest. So why are we seeing a change from city leaders following George Floyd's death? 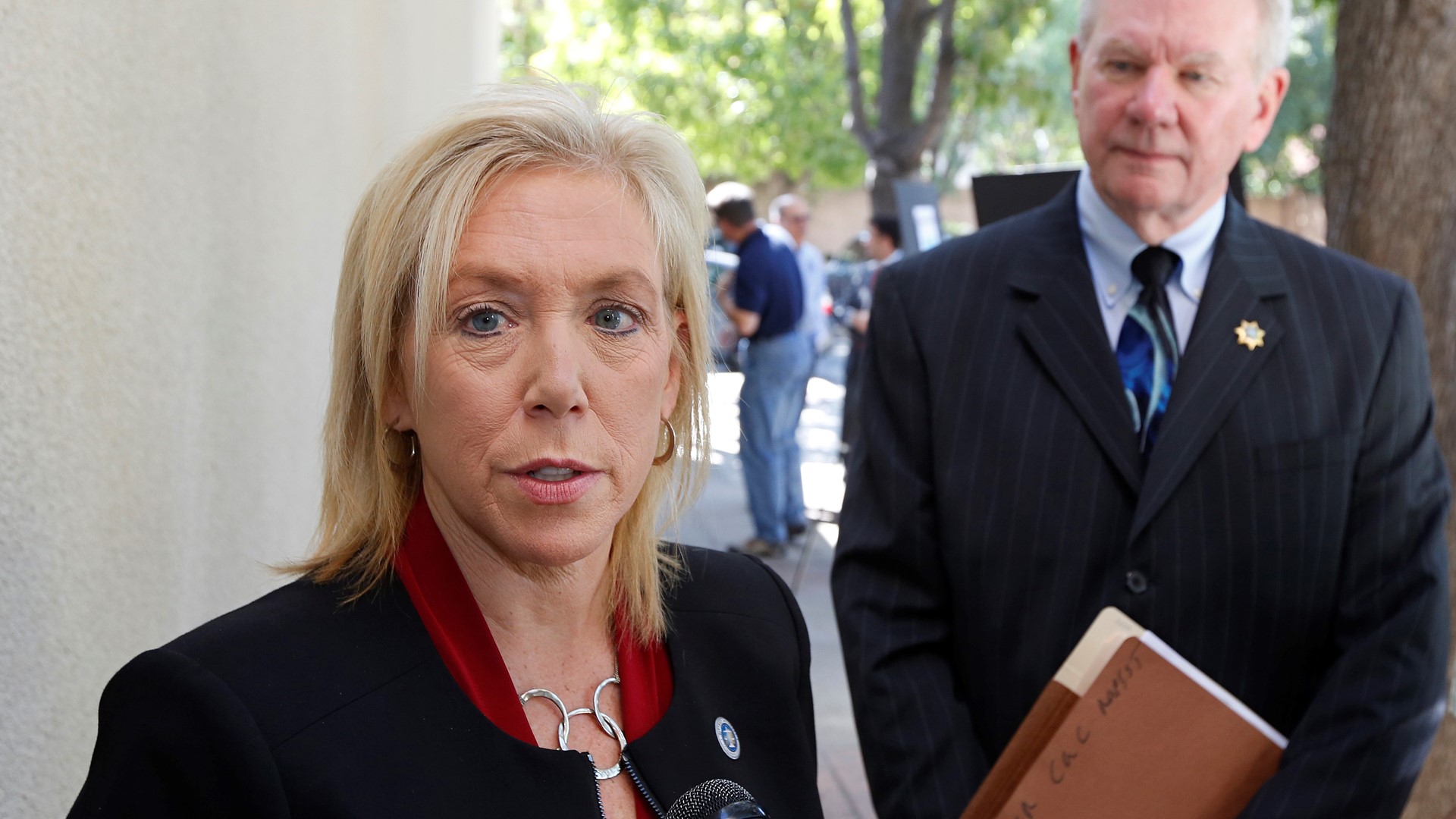 SACRAMENTO COUNTY, Calif. — How do we ensure what happened to George Floyd won’t happen in Sacramento?

This was ABC10's question to Mayor Darrell Steinberg. His response: “We bear the pain of our own experiences in Sacramento.”

Stephon Clark was killed in 2018. Joseph Mann in 2016. These aren’t the only two, but they’re two of the most remembered as they sparked massive unrest both locally, as well as across the nation.

In the past few weeks, Steinberg proposed the creation of a General Inspector position to limit police investigating their own cases, as well as announcing new police reform initiatives.

So, why are we seeing this now rather than when killings in our own community caused protests and rallies?

A CALL FOR CHANGE

Floyd’s death sparked worldwide outrage. But the demand for change is also in response to the growing concern of systematic racism and profiling.

According to data compiled by Mapping Police Violence, a research and advocacy group, between 2013 and 2019 police in the United States killed 7,666 people. Of that, 1,945 were African Americans, showing that the number of police killings in the U.S. is disproportionate. If African Americans make up 13-percent of the population, this means they’re twice as likely to be killed by police.

“Joseph Mann, who was mentally ill, was having an episode in the Del Paso Heights [area]. People called in and officers arrived,” Mark Merin said.

Merin is a civil rights attorney who represents Mann’s siblings. He said Mann was at first compliant with officers, but when he suddenly walked away, backup was called.

Dash camera footage from the backup officers shows them attempting to hit Mann with their cruiser upon arrival.

“They missed him and he scampered away, so they swung around and they tried to hit him again,” said Merin. “Then they cornered him and shot him, 14 bullets.”

Merin is working with Mann’s siblings after their father settled the case quickly, with a lack of answers to why police’s decision to use lethal force. A federal court ruling recently allowed their case to proceed, Merin hopes it will both help unveil records and investigation into why law enforcement used deadly force against a mentally unstable individual – as well as bring justice against the officers, both of whom have since left the department.

The desire for answers and accountability is a sentiment that the Clark family can understand, especially as protests rise following Floyd’s death.

“There’s not a day that goes by that I don’t hear the name Stephon Clark. [George Floyd’s death] has brought up a feeling of justice in a way that justice was being denied,” said Stephon’s brother, Stevante Clark. “We still want justice for my brother, transparency, and accountability.”

While Floyd, Clark, and Mann’s circumstances all had the same ending – death caused by a member(s) of law enforcement, there are also differences that may contribute to their different outcomes lawfully.

Floyd was filmed as an officer had a knee to his neck by a bystander on their cell phone. This footage was released on the internet, available for the world to watch immediately.

But footage caught by body/dash cameras and surveillance video is held for months as the district attorney investigates the officer-involved shooting.

“By the time the video is released be so far removed from the actual date of the event – and may be redacted, lawfully or legally,” said Sacramento State University Department of Criminal Justice Chair Professor Ernest Uwazie.

Some believe the amount of time it takes for the district attorney to investigate is unjust.

“So in a police homicide, how can it take a year and a half to look into that for God’s sakes? You know who did it, you know what weapon was used. Everything is available for forensic testing. Are you kidding me?” said police misconduct expert and attorney Stewart Katz. “If someone kills someone on the street and they kill someone and they have a gun in their hand. Here’s a gun – there would be a trial within 60 days after, so in basically 70 days of the shooting. But you’re telling me it takes a year and a half to decide whether or not we’re going to prosecute someone? I think it is in part to encourage people to forget about it.”

Professor Uwazie explains the criminal justice system to his beginner classes as falling under three main categories: the police, the courts, and the corrections.

When asked which of those is the most important, he said he believes police are the most critical as they carry the power of arrest.

“A police officer can arrest even a president or governor, in theory. There’s no other agency in our democratic society or in the American criminal justice system that has that power,” said Uwazie.

But then who holds the police accountable? In theory, the answer is the district attorney.

One of the biggest differences in Floyd’s case than what we’ve seen here is the Minneapolis police officers were all arrested. The ones involved in both Mann and Clark’s case were not. That’s because their actions were deemed lawful by Sacramento District Attorney Schubert.

“I think she’s very one-sided. She has never represented and fought for the underserved, underrepresented, and at-risk community. She does not represent our fights, rights, or causes,” said Stevante.

Schubert’s handling of Clark’s case is a point of contention to the Clark family as she used past text messages, toxicology reports showing drug use in Stephon’s system, and domestic violence allegations when deeming the shooting lawful, saying it would be relevant to a grand jury.

“She assassinated his character,” said Stevante. “What does the information on his cell phone have to do with the fact that he died with a cell phone in his hand? He was unarmed, he did not hurt anybody, he did not kill anybody. He should be alive today.”

But it’s not just Clark and Mann’s cases that Schubert has deemed lawful. In fact, she has never prosecuted or charged a law enforcement officer since she was first elected in 2014, and re-elected in 2016. During both of those elections, she accepted thousands in donations for her campaign from law enforcement organizations.

“She collected over $13,000 from police unions days after the death of my brother. She has chosen profit over people,” said Stevante.

“She cannot survive her job without the support of the police,” said Merin. “The way she does that is by endorsing their activities. It’s an obvious conflict of interest.”

But it’s not just Schubert.

“[Accepting donations from police unions] fits the pattern across the country. Most district attorneys are elected positions, which is an attempt to get a lot of support from law enforcement agencies which adds to the mistrust,” said Uwazie.

ABC10 reached out to district attorneys in Sacramento’s surrounding counties. Two times in the last six years have officers been prosecuted for officer-involved shootings.

“If you look at the rate of prosecution of police officers by the prosecutor, it’s very low,” said Uwazie. “In some places on average, maybe less than 5%.”

Members of law enforcement and the district attorney often work together on a variety of criminal and other cases. District attorneys often rely on officers to be their witnesses, particularly in criminal cases.

But when it comes to investigating the police, Attorney Stewart Katz who specializes in police misconduct cases says one of his main concerns is how those investigations are conducted.

“[District attorney investigators] don’t do an independent investigation,” said Katz. “They’ll show up at the scene and walk through it… They don’t talk to any of the witnesses… they’re just regurgitating, frankly, the police reports.”

He also believes the template used to investigate is slated in law enforcement’s favor. Rather than gathering evidence in an objective way, Katz said they’re looking at if there’s cause for reasonable mistakes in regards to officer-involved shootings.

“What they’re looking to do is justify the shooting, that’s what I believe the agencies do,” said Katz.

But it's not just activists who believe the district attorney and law enforcement walk too closely, it's city and state leaders too.

"I don't think the DA should be investigating officer-involved shootings and misconduct," said Mayor Steinberg. "I just don't. It's too close."

"How do you go and investigate people that you're counting on for your political survival?" said Assemblymember Kevin McCarty. "Think of it as a local high school baseball game. If one of the player's uncle was the umpire calling balls and strikes -- the whole game is in question."

As concern has grown around whether district attorneys have fair and unbiased investigations of law enforcement, new positions have been created such as the Office of Public Safety Accountability.

Most recently, Mayor Steinberg announced two major police reform proposals including new response to 911 calls as well as the creation of a General Inspector in Sacramento to oversee investigations of officer-involved shootings, deaths while in custody, and police use-of-force that results in serious bodily injury. The Sacramento City Council approved $5 million towards getting Steinberg's proposals off the ground.

But some believe unless it relies on direct accountability of officers' actions and community involvement, nothing will change.

"There's nothing significant that says transparency, accountability and consequences," said Berry Accius. "If I heard that following these policies, if a police officer breaks or is found guilty for any infraction - they will now be fired or fined... that would be like, 'Okay. Now get got it.' But we don't hear that."

Another bill, proposed by Assemblymember McCarty, would change how deadly force incidents by police are investigated statewide.

Bill 1506 would allow three local entities - district attorney, sheriff or the police chief - to pass along the investigation of deadly force incidents by police to the California Attorney General. But it wouldn't be for every deadly force incident, just for mainly controversial ones.

"Think of Stephon Clark," McCarty said as an example of a case that Bill 1506 would pass along to the Attorney General.

This type of legislation isn't anything new. In fact, McCarty said seven states across the nation have brought about this reform to have an outside, independent investigation.

This is McCarty's third attempt bringing this type of bill forward. But he believes in light of recent outcry regarding police reform, this year Bill 1506 will pass and help add transparency in these types of investigations.

"I think a lot of distrust would go away under our proposal," said McCarty.

California Attorney General Becerra said he hasn't been properly briefed on the bill and didn't have a response to it, yet. However, he did say that the Attorney General's office doesn't have the bandwidth to investigate every fatal officer-involved shooting or incident and urged voters to elect district attorneys they can trust for this type of work.

McCarty believes this bill will receive support across the political aisle as well as with statewide officials. As for what District Attorney Schubert thinks of the bill, we're unsure.

ABC10 reached out to District Attorney Schubert requesting an interview. She declined. We also asked if she would be willing to answer a couple of questions via email, she never responded.

We also reached out to the Sacramento Police Officer’s Union requesting a comment. We have yet to hear back.