"At the core of what ails us, in my opinion, is a differences in race. You don't change 400-plus years of something overnight," Police Chief Daniel Hahn told ABC10. 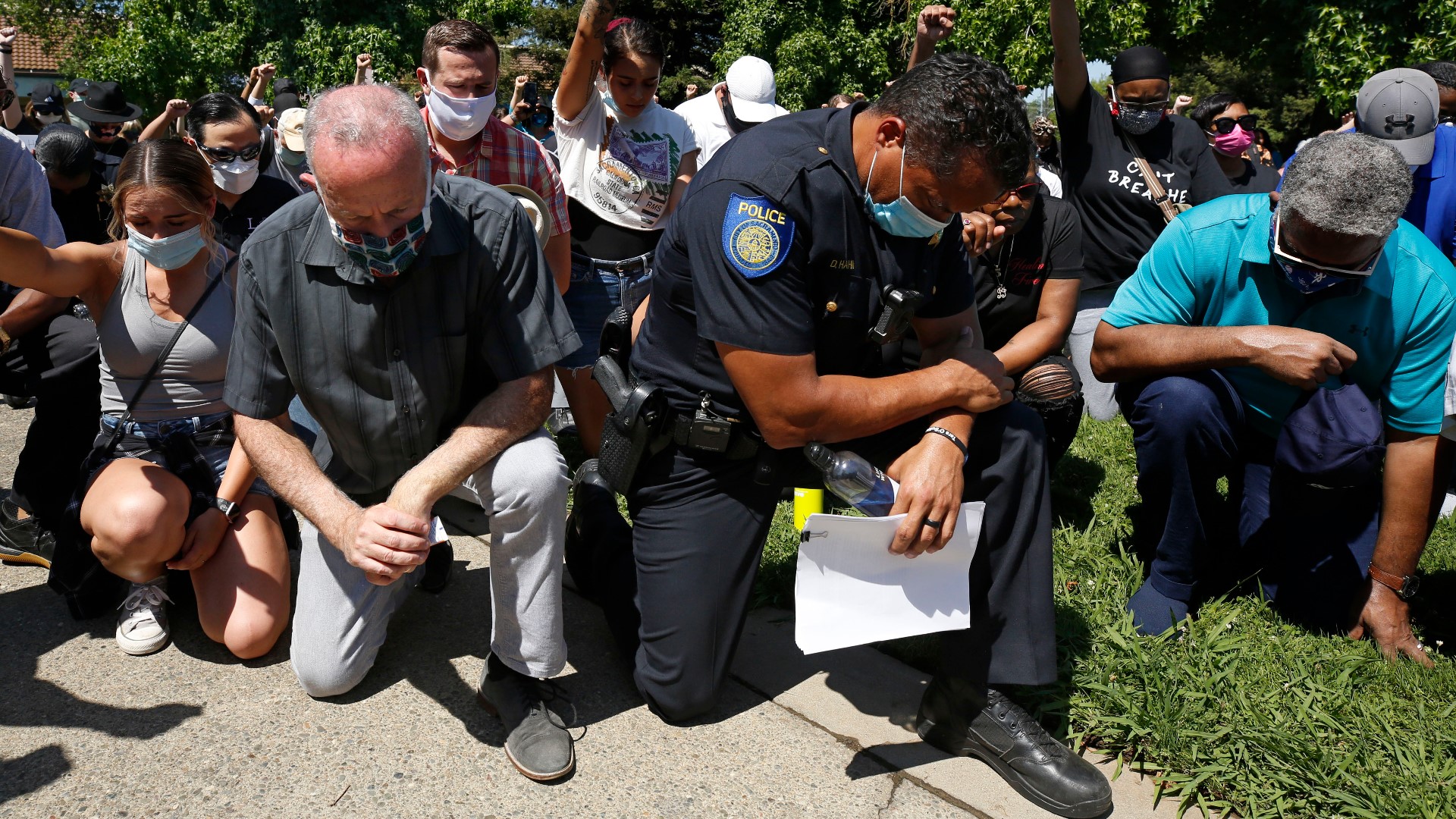 SACRAMENTO, Calif — Mayor Darrell Steinberg proposed Monday two major police reforms that would allocate $5 million for an agency that would respond to non-criminal activity. Sacramento Police Chief Daniel Hahn spoke to ABC10 about why he favors such a proposal.

Han also spoke about how he understands that some law enforcement officers demoralized during the protest against the police officer killing of George Floyd.

Hahn said his department is having an especially hard that it's approaching to be one year since the death of police officer Tara O'Sullivan. O'Sullivan was shot and killed as she was helping a domestic violence victim gather her belongings on June 19, 2019.

The following interview between ABC10's Chris Thomas and Sacramento Police Chief Daniel Hahn has been edited for clarity and brevity.

ABC10: What is your reaction to Mayor Darrell Steinberg's proposal to allocate $5 million to a new city department that for non-law enforcement responses to 911 calls that is not related to criminal activity?

Yeah, I completely agree that we, as law enforcement, specifically in the Sacramento Police Department, respond to quite a few calls that I don't think we should be necessarily responding to. Definitively not the people that our community needs on those calls or best served on those calls.

I think there are people with training and background are better for calls that are like some of the mental health calls, some of them, and a lot of the homeless related calls could be better served with people connected with resources with a social work background.

ABC10: Would you be expected to be at the table to decide what kind of calls the Sacramento Police Department to determine whether or not a call is for law enforcement to respond?

Sacramento Police Chief Daniel Hahn: I have no reason to believe that we wouldn't be at the table. Plus, I think we will still be involved in some sort of fashion, at least in the beginning. My guess is people will still be calling the dispatch center, and then they will refer to another department if it meets whatever criteria.

RELATED: Police reform in California: From Sacramento to the state level, here's what's being proposed

That will probably be one of the most important things that we do moving forward is determining what calls go to whom because you could put people in a dangerous situation if you send a social worker to a volatile situation. That could also put the community in danger if we don't do this very carefully.

ABC10: Could you talk to me about the proposal to create an inspector general with broad powers to thoroughly and publically investigate three incidents of police brutality, officer-involved shooting and police use of force that resulted in serious bodily injury?

As a Sacramento Police Department in this community, I feel like we proved over and over, we are not afraid of changing and building our relationship with the community.

At the core of what ails us, in my opinion, is a difference in race. You don't change 400 plus years of something overnight. It's a work in progress. We can always get better, we have a ways to go, but this department has gone through a tremendous amount of change and willingness to look at things.

We provided Stanford to examine our department, Center for Policing Equity, the Department of Justice, all those things we invited them to look at our department to give recommendations on how to get better.

Over the last two or three years, we implemented body cameras, the release of videos, and we reviewed and modified our use of force policy. The list goes on and on.

We are opened to an inspector general and another person independently looking at our officer-involved shootings. We are opened to anything. At least talking about it, we have an open mind about anything that can make our relationship with our community better and expand the experiences of our officer and the community.

We need to overcome this thing that has ailed us since the inception of this country being the differences in race, and unless we address those sorts of things, we will be in this cycle we continue to be in.

ABC10: What is your response to people calling to defund the police?

In my opinion, in terms of defunding, if you did that to this department that resulted in positions being eliminated, I think that will put some the most vulnerable and at-risk.

We are woefully understaffed right now. We have more than 100 officers less now than over 10 years ago. I think each community has to determine whether if that works for their community, but at the core of anything we do, we have to think about what is best for our neighborhoods, our community and what will make them safe. 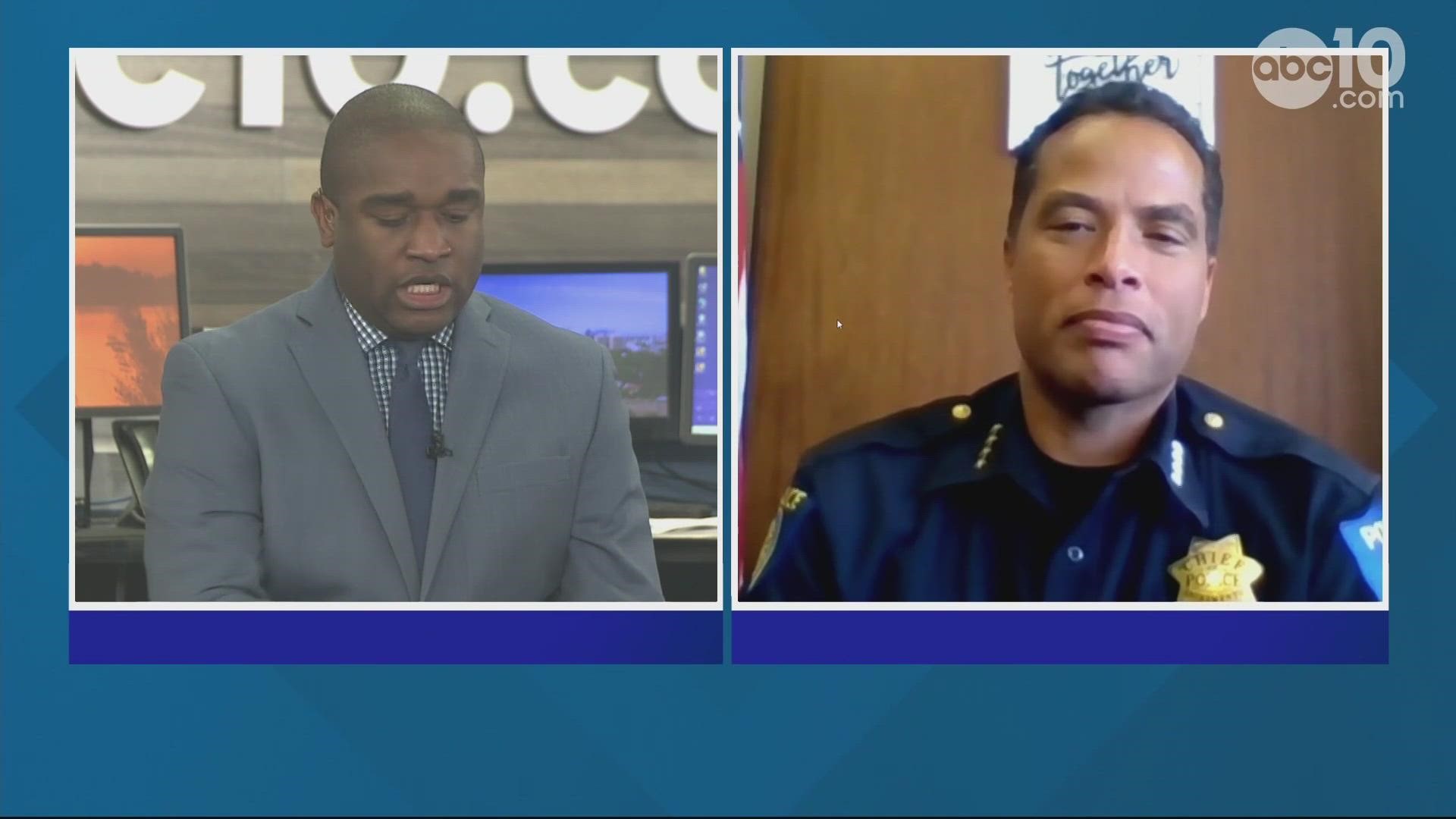 Whatever makes that less than what it is will pose a safety risk to the communities that utilize our services the most.

ABC10: I don't want to put words in your mouth, but it seems like what you're suggesting is defunding the police would pose a safety risk to communities.

It just depends. In terms of defunding, the devils are in the details in terms of what that means. If it means a reduction of police officers or professional staff in the department right now, how we are situated, I think that would pose a safety risk for our communities.

Over the last several years, this department built on our capacity on least lethal equipment such as pepper balls, sponge rounds, shields, or things like that.

We don't use rubber bullets, but there are specific times in this protest if we didn't have some of those least lethal pieces of equipment, we would have had to use lethal force.

One of the reasons why the department built that up in the last couple of years is not just because of protests but because of commonly on regular calls. This equipment is used on a weekly basis.

If we take that equipment away, all we leave officers left is their handgun or their rifle. We don't want to leave our officers with only one option.

That doesn't mean that those pieces of equipment can't be used in a different form or fashion or in a way that is inappropriately or in a way that we don't feel comfortable with, but I think just taking them away would take away officers options has and limits them to lethal force, which is something that I don't want to see.

ABC10: We have seen in the headlines of police officers walk off the job because of their experience with protests. How would you describe the morale in the police department?

I can understand people walking off the job. It is a challenging time. These protests have been extremely challenging in the sense that protesters are protesting the relationship between law enforcement and communities of color and some of the horrific incidents that occurred.

Some of the people ensured who was charged with the safety of the protesters and the community at large, is that law enforcement that the protest is protesting.

That in itself is a challenging dynamic. We we have seen as some of these protests, some of the more volatile and violent protests we've seen, at least in Sacramento.  As we saw across the country,  buildings burning, looting we saw looting, murders of both police officers and protesters.

With that said, we haven't had any of that in the Sacramento Police Department. That doesn't mean we won't have that in the coming days and weeks. In terms of morale, it is as good as you can expect given the circumstances. In addition to that, this is the first year anniversary that we lost Tara O'Sullivan.

It is a very, very challenging week for this department and an emotional week. On top of the last several weeks of volatile weeks of officers were in their riot gear and having rocks and bricks thrown at them while making sure to protect protesters while protected as well as businesses, peoples' lives and our own partners' lives.

It is as good as to be expected, but it is extra challenging this is the week that is the anniversary of losing Tara. We are not only focused on our community, the protest and the O'Sullivan family who lost their loved one, and our family that lost one of our officers.