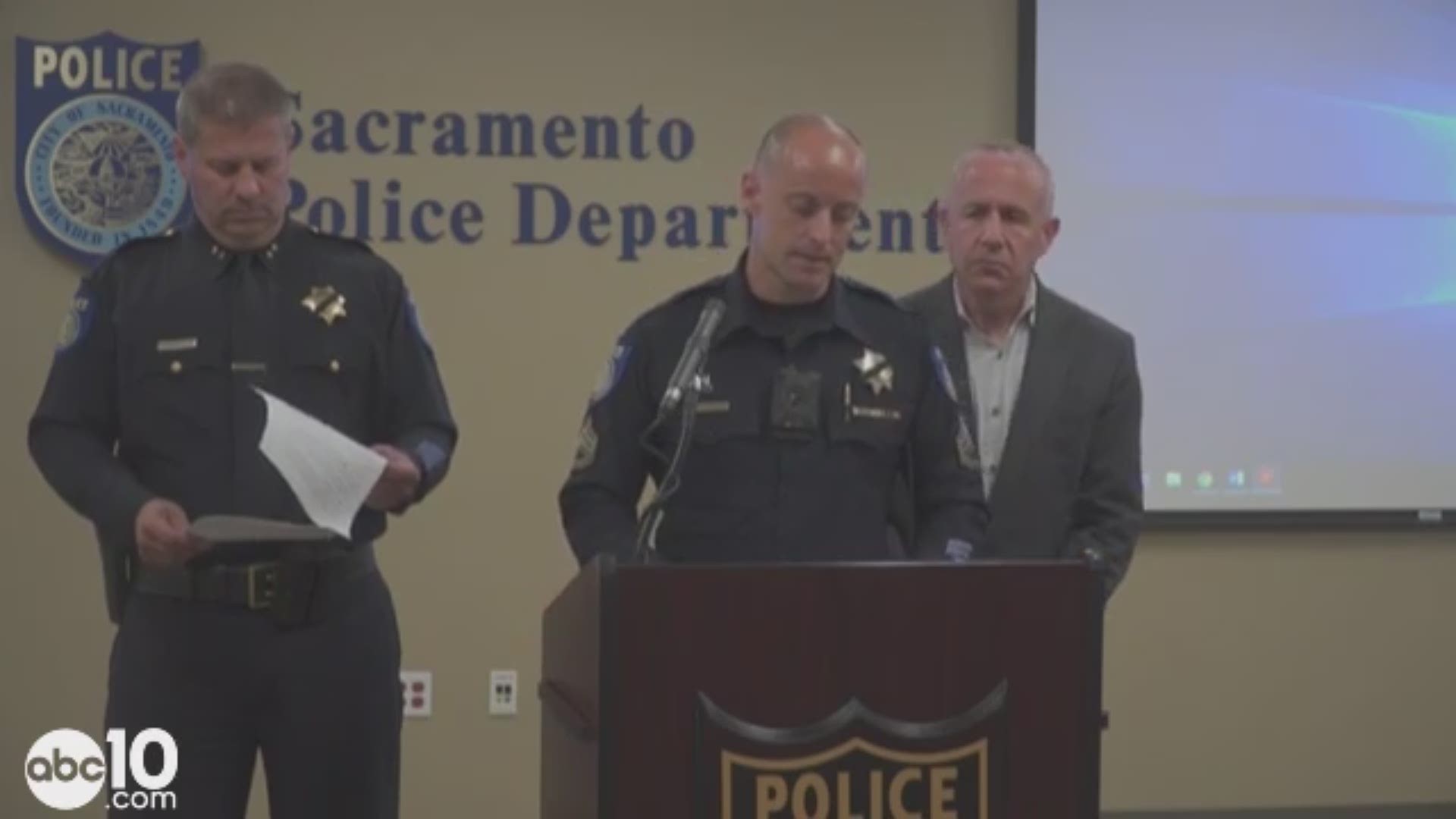 SACRAMENTO, Calif. — The man who allegedly shot and killed a Sacramento officer Wednesday during a hours-long standoff following a domestic disturbance was taken into custody, police officials confirmed.

Shortly before 2 a.m. Thursday morning, the unidentified shooter came out of the home in which he was holed up following hours of negotiations, police said. It's unclear what happened during the negotiations that lead to the suspect's arrest.

Sacramento Police Officer Tara O'Sullivan, 26, was helping a woman at the home get her belongings after a domestic disturbance when the man began firing a rifle from the house, police confirmed. O'Sullivan was shot while walking in the home's yard while helping the woman.

O'Sullivan was rushed to the hospital, where she was later pronounced dead.

O'Sullivan worked for the department's administrative staff from January to July 2018 before joining the Sacramento Police Academy. She graduated from the academy in December 2018.

Officer Tara O’Sullivan, 26, was at a home in the 200 block of Redwood Avenue helping a woman gather her belongings following a domestic disturbance when a suspect began firing a rifle.

O’Sullivan was shot and other officers took cover as the gunman continued firing the weapon. She was partnered with a training officer at the time of the shooting, Deputy Chief Dave Paletta said during a press conference Thursday morning.

An armored vehicle showed up and took O’Sullivan to UC Davis Medical Center where she later died following surgery.

Paletta said O’Sullivan joined the department in January 2018. In July 2018 she entered the police academy and graduated later that year in December. She graduated from Sacramento State University with a degree in child development.

"It's been 20 years since the Sacramento Police Department lost an officer in the line of duty, but the last two graduating classes have lost an officer," Steinberg said. "Both Natalie Corona and Tara O'Sullivan had bright futures ahead of them. They had big dreams and even bigger hearts."

Paletta said the suspect was still actively firing at 11:30 p.m. He said officers are trying to negotiate with the suspect to peacefully surrender.

Officers are still at the scene where an officer was shot Wednesday evening in north Sacramento, according to the Sacramento Police Department.

Sgt. Vance Chandler said the department received a call about a disturbance between a man and a woman shortly before noon. At least two officers met with the woman at a separate location before going with her to a house in the 200 block of Redwood Avenue to retrieve her belongings. They arrived at the house at 5:41 p.m.

Chandler said the suspect began firing a rifle at 6:10 p.m. while officers were helping the woman gather her belongings. He said one officer was shot in the backyard of the home.

Officers took cover until an armored vehicle arrived at 6:54 p.m., Chandler said. The officer was taken to a local hospital at 6:59 p.m. and is in serious condition.

Chandler said the woman they escorted to the house is safe. He did not say what kind of relationship she has with the suspect.

The suspect is still firing at officers, Chandler said.

"This is a very unique situation anytime you have a suspect firing at officers multiple times," Chandler said. "Our priority is to take every precaution so that no one else is shot."

Negotiators are on the scene and multiple agencies are working with the Sacramento Police Department to get the situation under control, Chandler said.

The Twin Rivers Unified School District Police Department has opened Noralto Elementary School at 477 Las Palmas Ave. for residents who have been evacuated from the neighborhood.

The department has not identified the suspect. 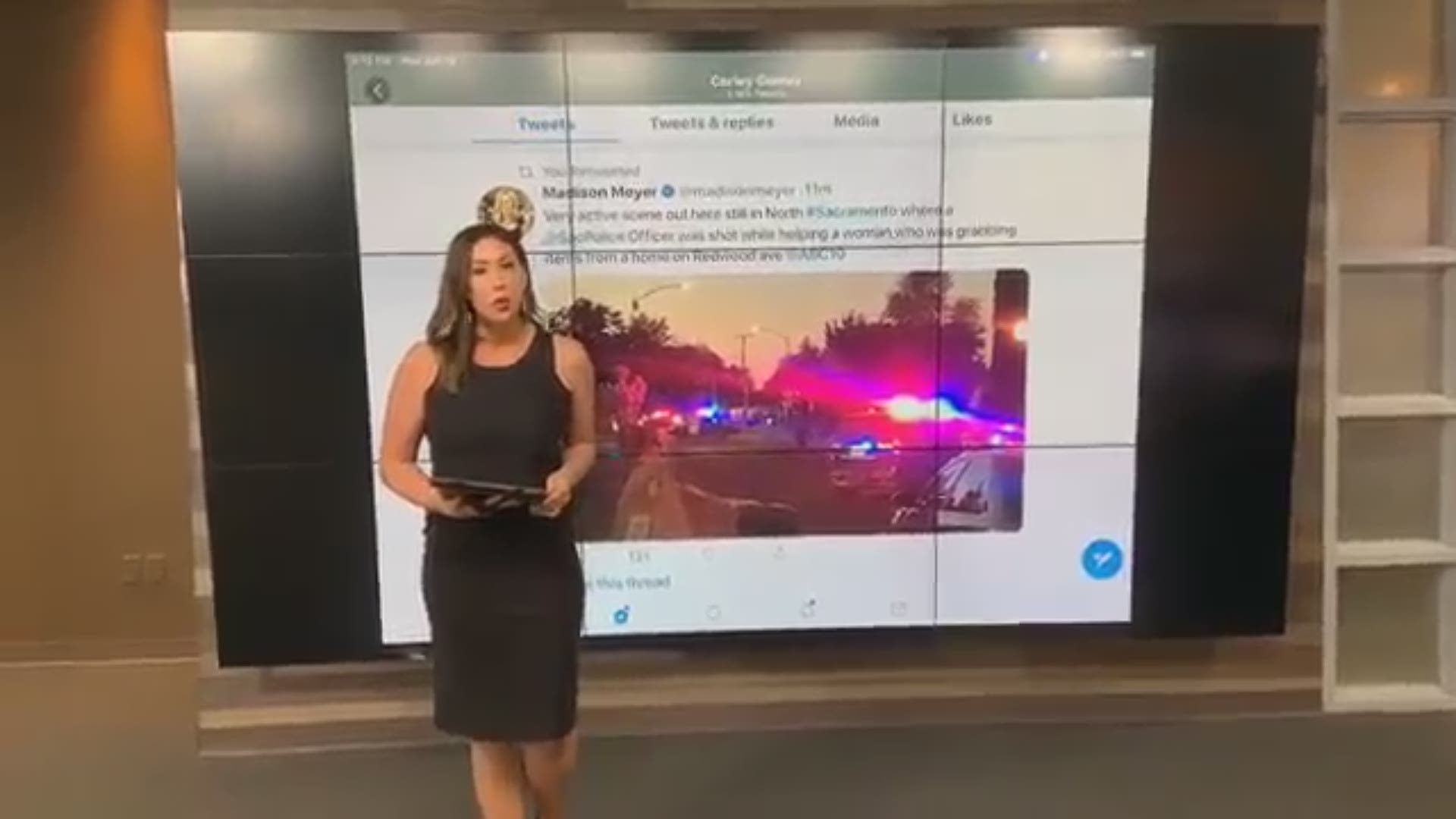 "All I know right now is that the officer is hurt bad. She is at the hospital now and we're praying for her recovery and for her to make it through," Warren said.

Sacramento Police tell ABC10 that an officer has been taken to UC Davis Medical Center.

Sacramento Police are warning the public to keep away from the area around Redwood Avenue and Edgewater Road in north Sacramento as police continue to search for a gunman who is said to be firing in the neighborhood.

Several of our reporters are near the area, reporting that they heard several pops that could have been gunshots around 7 p.m.

As a result of the shooting, several roadways are closed and SacRT has announced route cancelations.

Here's a look at traffic from Waze: