Farmers say the state is trying to take their water away because a new plan from the state would almost double the amount of water flowing from three Central Valley rivers to the ocean. 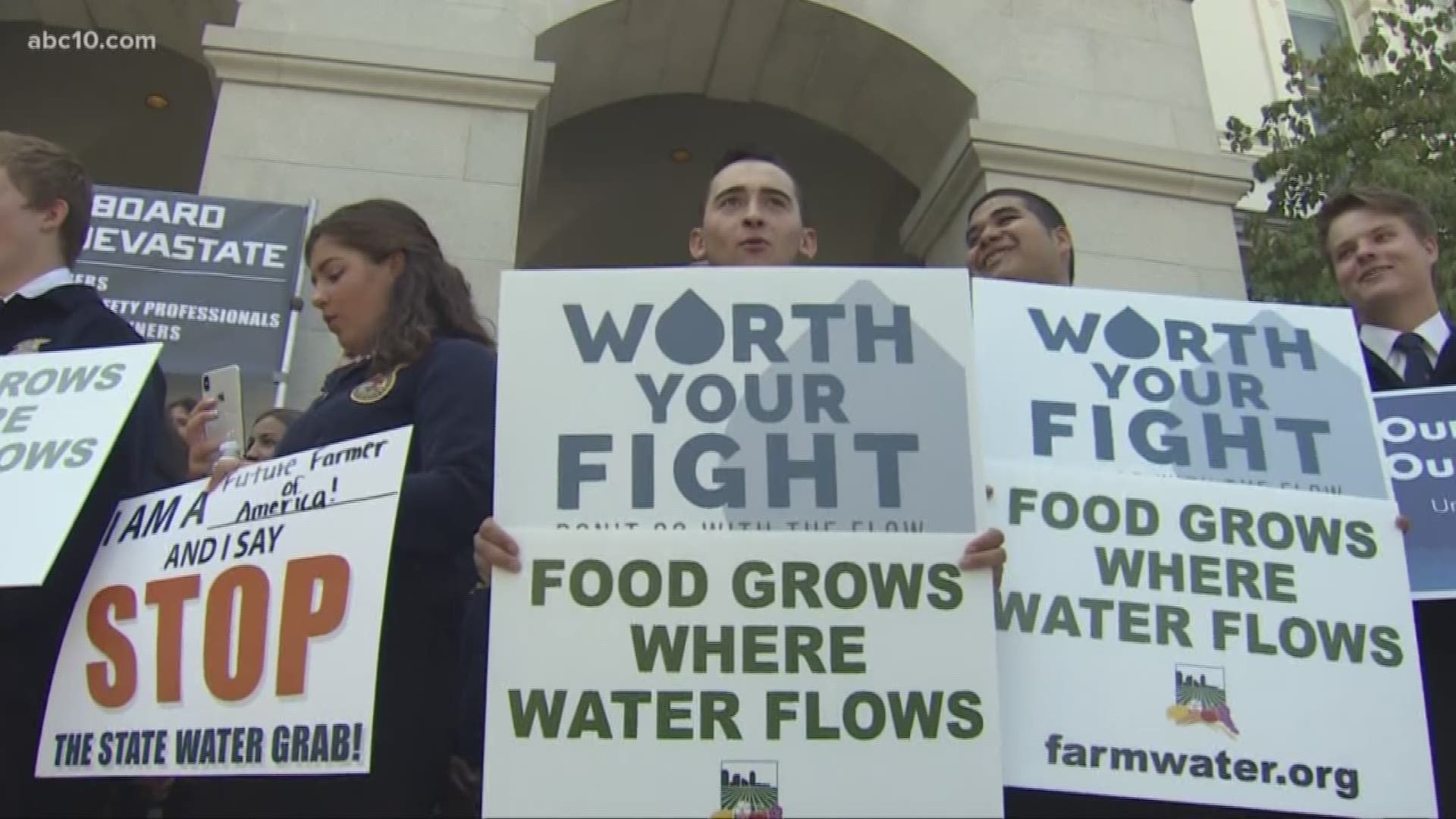 Hundreds of Central Valley farmers traveled up to Sacramento on Monday to protest, wanting to "stop the water grab."

They say the state is trying to take their water away because a new plan from the state would almost double the amount of water flowing from three Central Valley rivers to the ocean.

The California water board argues doing this will lower water temperatures and create a better habitat for fish, saving salmon and other native fish, but farmers think doing this will put them out of a job.

"We're going to Sacramento, to make sure that the state water resources control board understands our position," Lynn Miller, a farmer said.

Here’s a few more photos of the “Stop the Water Grab” rally in Sacramento earlier this afternoon. @ABC10 pic.twitter.com/TPdU5fGix9

These farmers from the San Joaquin Farm Bureau let ABC10's Lena Howland tag along and shared their stories with her on the way up.

"We think the state is making a big mistake in wanting to take away some of our water," Karen Baumbach, an almond grower said.

"There's not a lot of clear representation as far as the farmers go, I don't think our voices are being heard as far as what kind of detrimental impact this is going to have," Josh Barton, a 5th generation farmer at Barton Ranch said.

"It seems like all they're really concerned about is the fish and it's not about fish, it's about people, people need the water, it's our resource," Elaine St. John, a water activist said.

Everyone had a different reason for wanting to go to the rally but many said jobs, clean drinking water and the livelihood of their entire communities in the Central Valley are at risk if this "water grab" moves forward.

"If California, the state is successful in undermining agriculture, it's going to have a huge impact on the overall economy, people who have nothing to do with agriculture will be affected," Don Barton, a 4th generation farmer at Barton Ranch said.

Upwards of 1000 farmers from across the state joined this group of 52 farmers from San Joaquin County on the steps of the Capitol building to ask for a change.

"It's great!" Josh Barton said. "Good to see a unified front on this matter, it's good to see, getting everybody charged up, it's good to know that there are people that agree that they can't control our water."

After chants of "don't take our water" subsided and farmers traveled home from the rally, some said "mission accomplished" but others are saying they still have a long road to go.

"There is a lot more work to be done, this is just the beginning of this fight and we know that without water, prime farmland is just dirt," Don Barton said.

The State Water Resources Control Board has hearings at the Capitol Tuesday and Wednesday. They are expected to vote on this plan later this month.