Dozens of tenants at a Sacramento County apartment complex are facing eviction less than two months before a new state law would protect them from it. 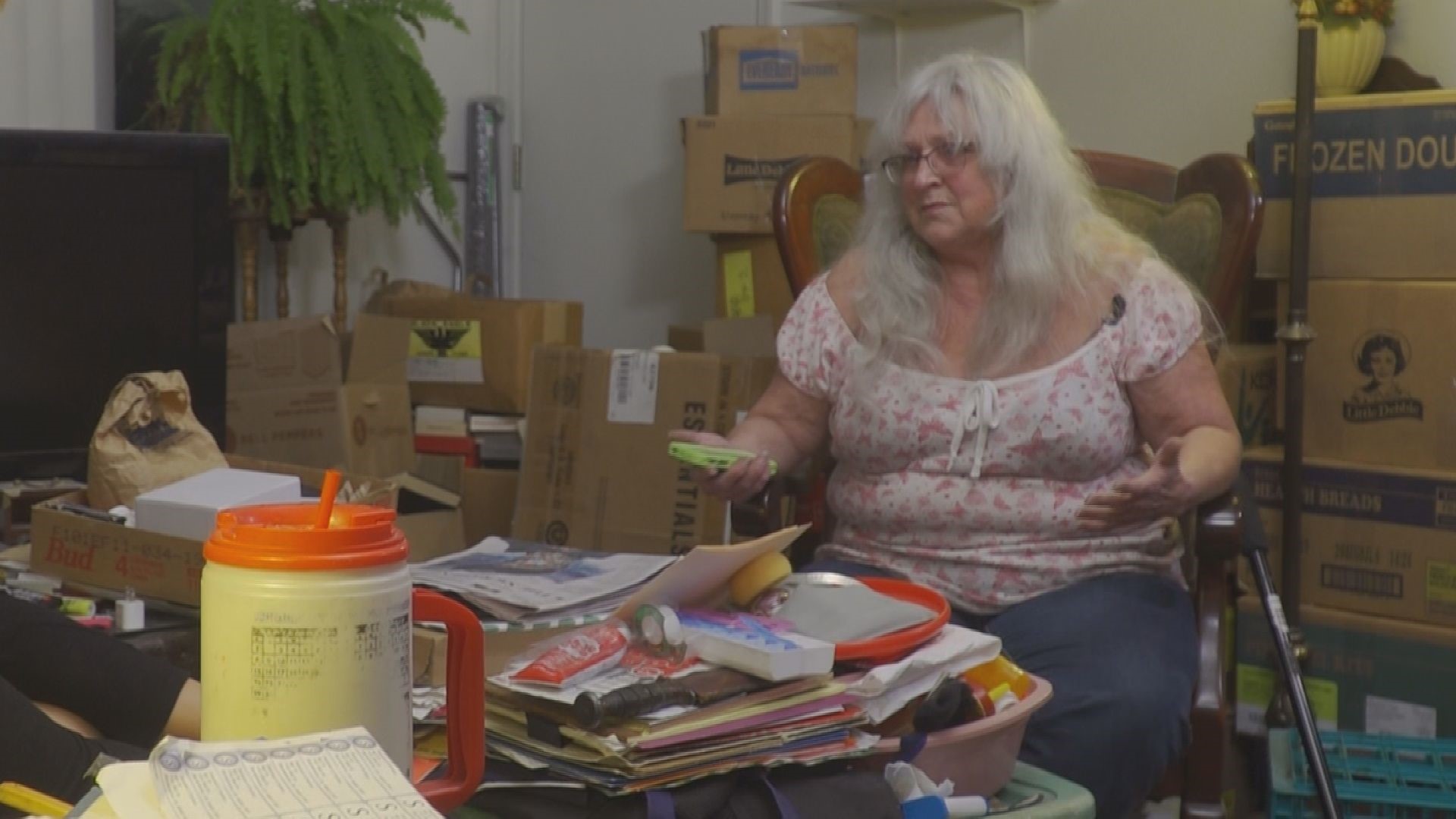 SACRAMENTO COUNTY, Calif. — Dozens of people are facing evictions from an apartment complex in Arden-Arcade after a measure to protect them failed to pass at last week's Sacramento County Board of Supervisors meeting.

People living in the 54-unit Bell Oaks Apartments learned earlier this fall they have to get out by no fault of their own, the complex just changed ownership. As these people pack up their lives, many of them have no place to go next.

"This is, like, Christmas stuff,” Debbie Stollery said, rifling through one of the dozens of boxes littering her two-bedroom apartment. "My room is a disaster in here."

She pays $930 in rent, barely covered by her $977 monthly social security check, so when she got notice she'd need to move, her thoughts turned dark.

"I [sat] down on my couch and I was looking at the floor thinking, 'God, I might as well just shoot myself now because what am I going to do?'" she told ABC10 Thursday evening in her living room.

In a month and a half, a new California law will go into effect, protecting month-to-month renters like Debbie from these so-called "no-fault evictions."

Under the Tenant Protection Act of 2019, or AB 1482, landlords will only be able to evict tenants if they have a reason--like not paying rent or breaking their lease agreement.

At their Nov. 5 meeting, Sacramento County supervisors voted on an emergency measure to ban no-fault evictions until the new law kicks in on Jan. 1, 2020. Only three of five supervisors voted to pass it, however, and the ban needed four to pass. One of the "no" votes was Debbie's supervisor, Susan Peters.

In the days following that meeting, Stollery asked to meet with Peters, but she wrote in an email.

"While I understand your desire to meet and discuss no-fault evictions, the matter was discussed thoroughly on November 5 and the vote taken concluded the matter,” it said, in part. The rest of her letter is detailed below.

"In other words, it's done,” Stollery summarized.

ABC10 reached out to Peters for comment. A county spokesperson replied, pointing out that Peters did help secure $2,500 in cash for each unit displaced by the evictions, plus a full return of their security deposit.

“When Supervisor Peters learned about the impending evictions at the Bell Oaks Apartments, she engaged SHRA and the County’s Department of Human Assistance to provide any and all available services to the tenants who received the notices,” spokesperson Kim Nava wrote in an email. “She also spoke with the California Apartment Association about the issue and, despite the complex owners not being members of the association, the representative worked with the owners to provide cash payments of $2,500 to all tenants at the apartments, as well as a full refund of their security deposits. Supervisor Peters did this well in advance of the Nov. 5 Board meeting in order for the tenants to get help as quickly as possible.”

Debbie has done the math and her homework. Apartments in her price range have long waiting lists, and units that are available now are unaffordable.

"I can't afford an apartment, security deposit, pet deposit, you know, and pay somebody for a truck and hire somebody to help me move - all in the same month,” she said, estimating the total cost at nearly $3,800.

Stollery has to be out of her apartment the day before Thanksgiving, less than two weeks from now.

Jim Lofgren, Senior Vice President with the California Apartment Association, is working with the apartment complex and tenants in this process. He spoke at the supervisors’ meeting against the passage of the measure to ban no-fault evictions. Doing so would take away a tool through the rest of 2019 that property managers can use to get rid of nuisance tenants, especially those who bother or endanger their neighbors.

In a statement to ABC10, Lofgren wrote:

“At the request of Supervisor Susan Peters, the California Apartment Association continues to monitor the status of tenants at Bell Oaks Apartments who must find new housing.

“A representative of the owners told CAA that they will attempt to accommodate reasonable requests for assistance from tenants with special needs. A tenant with a special need should contact the manager at the apartment community immediately.

“The owners already agreed that tenants who were required to move will receive a payment of $2500 plus their entire security deposit minus any rent that may be due. This payment will be issued within one week, if not sooner. It will not be delayed for 21 days as permitted under the state law.

“A request to receive some of these funds early to pay the first month’s rent and security deposit at a new apartment seems reasonable.”

The county spokesperson provided ABC10 with the letter Supervisor Peters wrote to Stollery:

“On November 5 the Board of Supervisors took up the issue regarding an urgency ordinance temporarily prohibiting no-fault evictions through December 31, 2019 for residential real property built prior to January 1, 2005. That hearing was in response to evictions reportedly occurring specifically at the Bell Oaks Apartments (Bell Oaks) following the enactment of Assembly Bill 1482.  You attended and spoke at that hearing so you are familiar with the discussion and outcome – and now after the fact you contacted my office to meet and discuss the issue.

“You will recall at that hearing I explained that after I learned about the situation at Bell Oaks I contacted the Sacramento Housing and Redevelopment Agency (SHRA) about checking the status of any Housing Choice Voucher Tenants residing there. I also contacted the County’s Health and Human Services Department to see what services, if any, could be rendered to the Bell Oak Tenants. I also discussed the situation with a representative of the Sacramento Valley California Apartment Association about the impact and learned the property owner was not a member of that association. Notwithstanding the lack of membership, the association representative understood my concern about the welfare of those tenants and said he would talk to the owners. At the hearing you heard how he was able to convince the owners to provide cash payments to all tenants at Bell Oaks plus the full return of their security deposits.

“At the hearing the Director of SHRA testified that she had no information confirming widespread evictions were occurring throughout the unincorporated area. After all the testimony including that in support of the proposed ordinance, I explained that based upon the anecdotal evidence including the very few communications my office received about mass evictions prior to the hearing I was not convinced that situation necessitated the passage of the ordinance and urged the other members of the Board to delay the vote to further research the topic, which was rejected. Based upon everything I heard that afternoon and the unwillingness of my colleagues to pursue additional information, I voted against the measure and it failed to capture the necessary votes needed for passage.

“While I understand your desire to meet and discuss no-fault evictions, the matter was discussed thoroughly on November 5 and the vote taken concluded the matter.”

The letter did not placate Stollery. She feels hopeless.