Protesters gathered at Cesar Chavez Park at 8 p.m for a third night to demand justice for Jacob Blake Jr., who was shot in the back by Kenosha police. 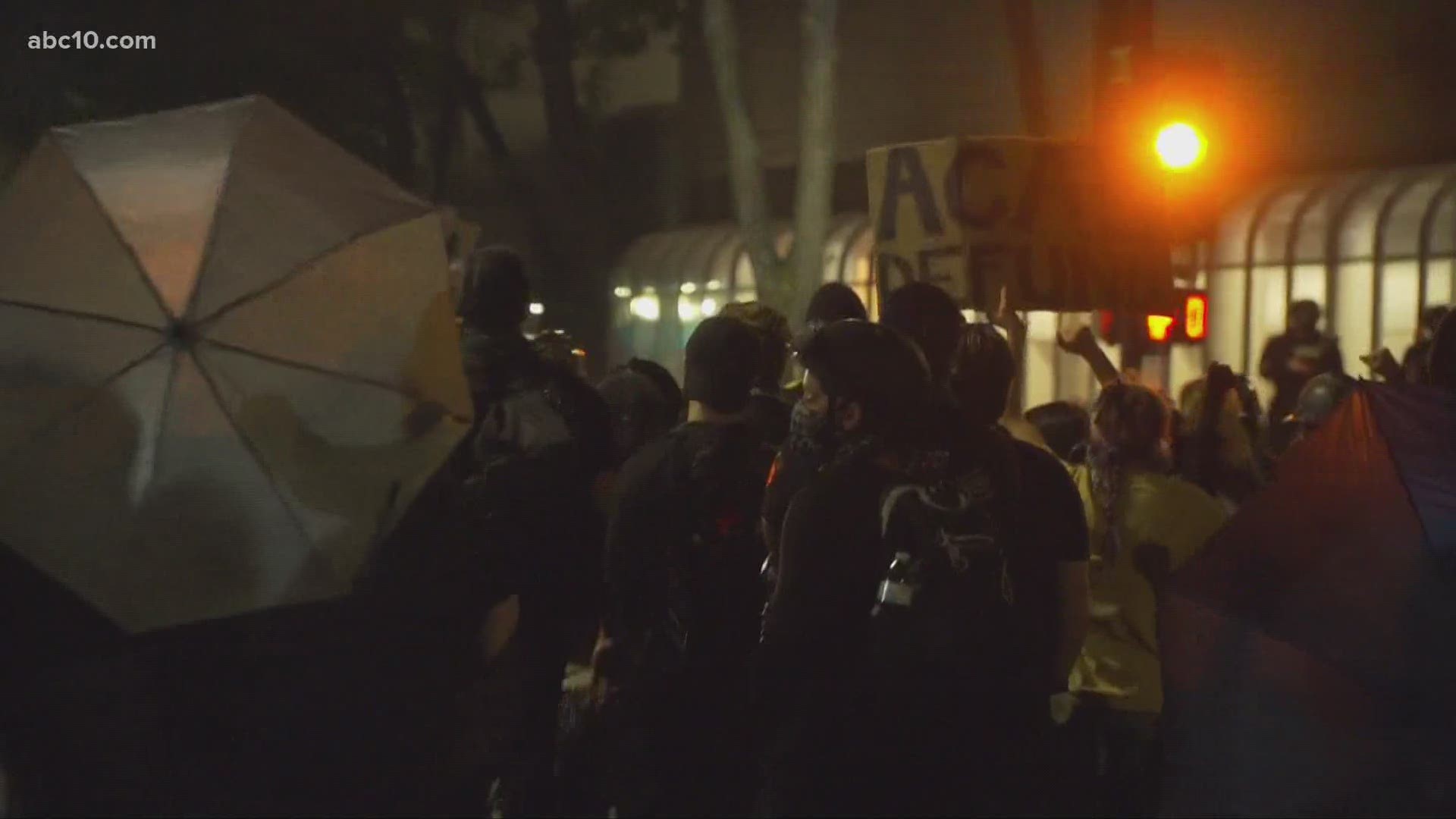 Sacramento police arrested two people during a Saturday night protest demanding justice for Jacob Blake, Jr., who was paralyzed after he was shot in the back seven times by Kenosha police.

Police said one person was arrested for resisting officers. They allegedly had gas masks, a smoke bomb and a bottle of urine.

Police arrested another person for pointing a laser in an officer's eyes.

As of now one subject has been arrested for directing a laser in an officer’s eyes. Another suspect was arrested for resisting officers. The suspects were in possession of the items below. Among these items were a bottle of urine, gas masks and a smoke bomb. pic.twitter.com/ZxvqZztRe6

A heavy police presence will stay in the downtown area.

The crowd has returned to Chavez Park and is beginning to disperse. Heavy law enforcement presence remains.

Police are asking to use alternative routes in the meantime.

8:55 p.m. Saturday: A crowd is back out at Cesar Chavez Plaza for another “Solidarity with Kenosha” demonstration. It started at 8, protesters gathered together about 15 minutes ago and have began chanting. @ABC10 pic.twitter.com/gaiqxqLKdT

Groups are gathering at Cesar Chavez at 8 p.m. for the third night of protests to demand justice for Jacob Blake, Jr., who was paralyzed after he was shot in the back seven times by Kenosha police.

Dante Camacho lives in Stockton, but for the past three nights, he has come to Sacramento to protest Blake's shooting.

"No one group is putting on these protests," Camacho said. "It’s a variety of different groups, and just individuals coming out anyone can hop on a megaphone, anyone can bring water.”

Graffiti still lingers on buildings during the day in downtown Sacramento from protest overnight. The store PLA Skateboarding is located at the corner of Cesar Chavez Plaza, where the protest set to begin. The skate shop, along with many others boarded up their windows to prepare for the worse.

“We all are prepared we know that the protesters, for the most part, are very peaceful it seems like it’s not until it gets really late that they start breaking windows and I don’t think they have anything to do with protesters and what they are trying to get through,” said Matthew Jordan, a PLA Skateboarding manager, said.
Camacho said the crowd is picking and choosing which buildings they target during the protests.

Sacramento Police Department plans to continue to have a heavy police presence for night three of protest but said no arrest was made, and no one was injured during night two of protesting.

Sacramento County Sheriff Scott Jones announced Friday he requested the National Guard deploy to the California capital after some smashed business windows and tried to set the district attorney's office on fire.

No arrests were made in Thursday night's vandalism.

Sacramento Mayor Darrell Steinberg said the city might not want the National guard's help for the ongoing protests.

"The presence of the National Guard may be necessary at some point, but it also has the potential and the risk of inflaming the situation, and that's not - we want just the opposite," Steinberg said.

Sacramento Regional Transit announced it suspended services in the downtown area due to the protest.

Rider Alert: With another night of protests scheduled this evening (Saturday, August 29, 2020) and the large number of people expected to be walking on or near the light rail tracks and key corridors, SacRT will be temporarily suspending light rail, bus and SmaRT Ride service... pic.twitter.com/ceHdjcbwHj