Nearly three weeks after the crash and two days after Shalvinesh Sharma's body was recovered, the body of Roselyn Sharma and her tow truck were lifted from the Sacramento River. 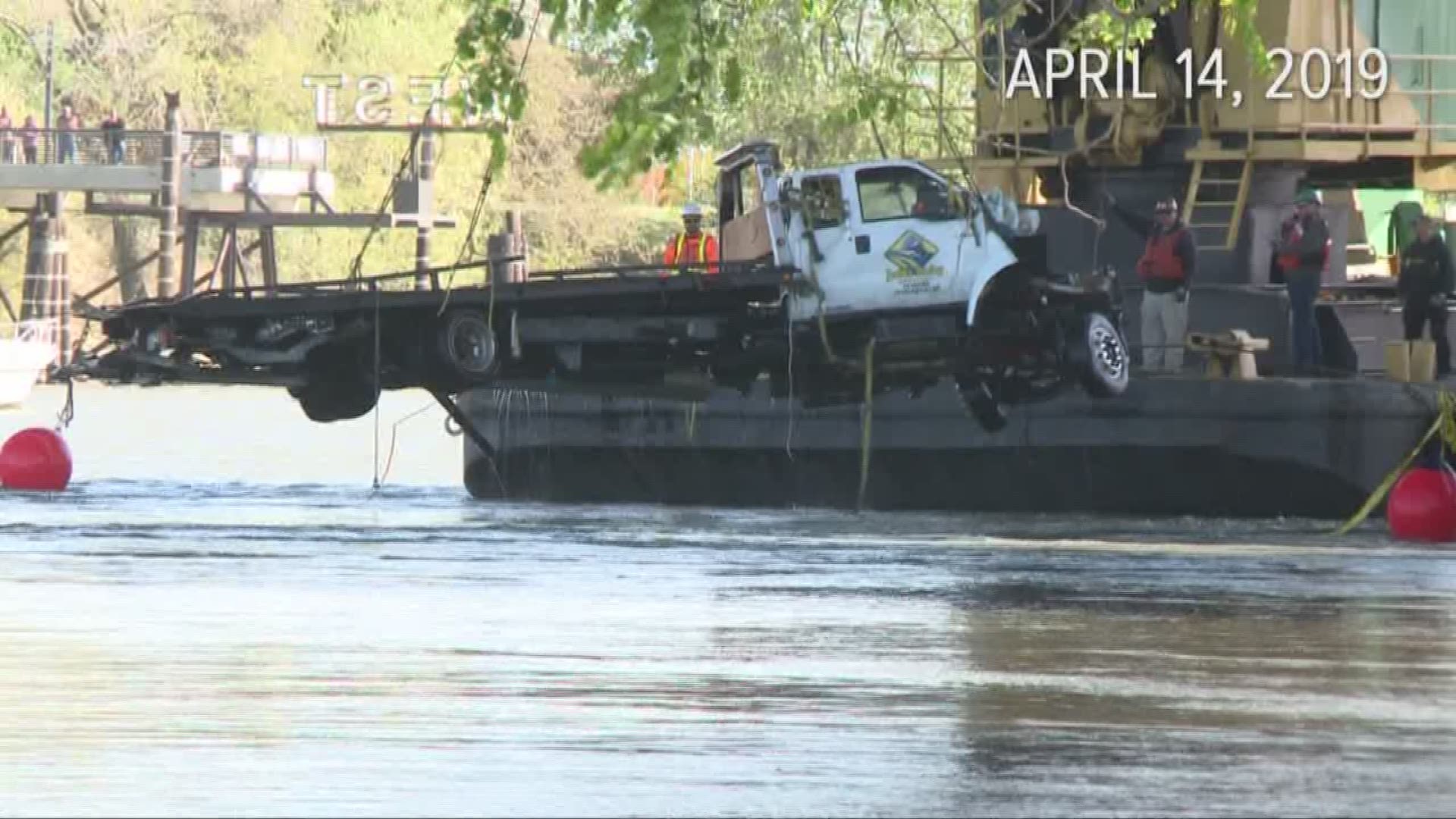 SACRAMENTO, Calif. — Nineteen days after a big rig collided with a tow-truck, throwing it and two passengers into the Sacramento river, a private dive team and crew has pulled it from the water.

The collision happened around 8:30 p.m. on March 26 on the Pioneer Bridge on Highway 50 between West Sacramento and Sacramento, according to the California Highway Patrol.

“After the initial collision, the flatbed tow truck veered to the left, collided with the concrete and metal bridge railing, before going over the side and falling approximately one hundred and fifty feet into the Sacramento River,” CHP South Sacramento wrote on Facebook.

Officials with Sacramento’s all-volunteer Drowning Accident Rescue Team (DART), searched for the married couple who they believed to be Shalvinesh and Roselyn Sharma, the owners of Justin’s Towing, CHP South Sacramento wrote on Facebook.

However, the extreme conditions including low-visibility and light, a fast-moving river current, and frigid water forced crews to turn from a rescue to a recovery mission.

While officials continued to search for a safe way to remove the truck and recover the bodies, loved ones held a vigil for the Sharmas near the site of the crash.

Authorities had not been able to confirm the identity of the victims at this point. Though family, friends, and colleagues presumed the Sharamas to be dead.

Loved ones issued pleas for officials to move quickly to remove their bodies from the river bed.

CHP officials announced it was collaborating with multiple agencies to perform a safe and timely recovery of the vehicle.

“Due to the challenging river conditions, all involved agencies are taking precautions to make sure that another tragedy does not occur during the recovery process,” CHP reported.

Officials took steps to secure equipment to begin recovery efforts. CHP said it was in contact with the family and have informed them of the challenges.

Using special sonar equipment, the river was mapped and police were able to determine the location of the vehicle, the CHP South Sacramento wrote on Facebook.

“The location of the vehicle was tagged and ongoing recovery efforts are in the planning stages with no confirmed timetable,” CHP South Sacramento wrote on Facebook.

CHP officials reported it had been working with Pacific Gas and Electric, CalTrans, the Sacramento Police Department, and the Sacramento County Sheriff’s Department to recover the Sharmas and their tow truck.

“Both CalTrans and PG&E have structures close to where the vehicle came to rest so special considerations need to be made before recovering the vehicle safely,” CHP South Sacramento wrote on Facebook. “Both agencies are cooperative partners and support our efforts fully. At this time, we hope to perform a recovery of the vehicle sometime next week.”

Agencies work together to develop a plan and announced their plans to remove the vehicle within a week.

The family of Shalvinesh and Roselyn Sharma announced plans to hire a private company from Vallejo to extract the vehicle.

Divers and crews with Global Diving and Salvage were expected to begin work two days later. The company said it planned to bring a barge onto the Sacramento River as divers helped to remove the truck.

A body was found floating in the Sacramento River about five miles south of where the crash has happened.

"This has been very hard, because it's been going on three weeks,” said Poonam Nair, the cousin of Roselyn Sharma. “There's been no closure, there's no funeral. And we shouldn't have to wait that long to get the bodies and it shouldn't be about money for them to dive and rescue people, it's a shame."

Crews with the private Bay Area team began recovery efforts, which continued over several hours and through the weekend.

The tow truck was lifted from the Sacramento River and a woman's body was found inside. The woman is believed to be Roselyn Sharma, but Sacramento County Coroners will verify that in the coming days.

“We were thinking that somebody was going to come in the middle, like the city or state, and help us out,” said Donald Singh, the brother of Roselyn. “That this could've been done in a couple of days instead of this long, long, process. It was really frustrating.”