The meeting to discuss to the death of Stephon Clark has now been adjourned. Mayor Steinberg cited safety reasons for the decision. 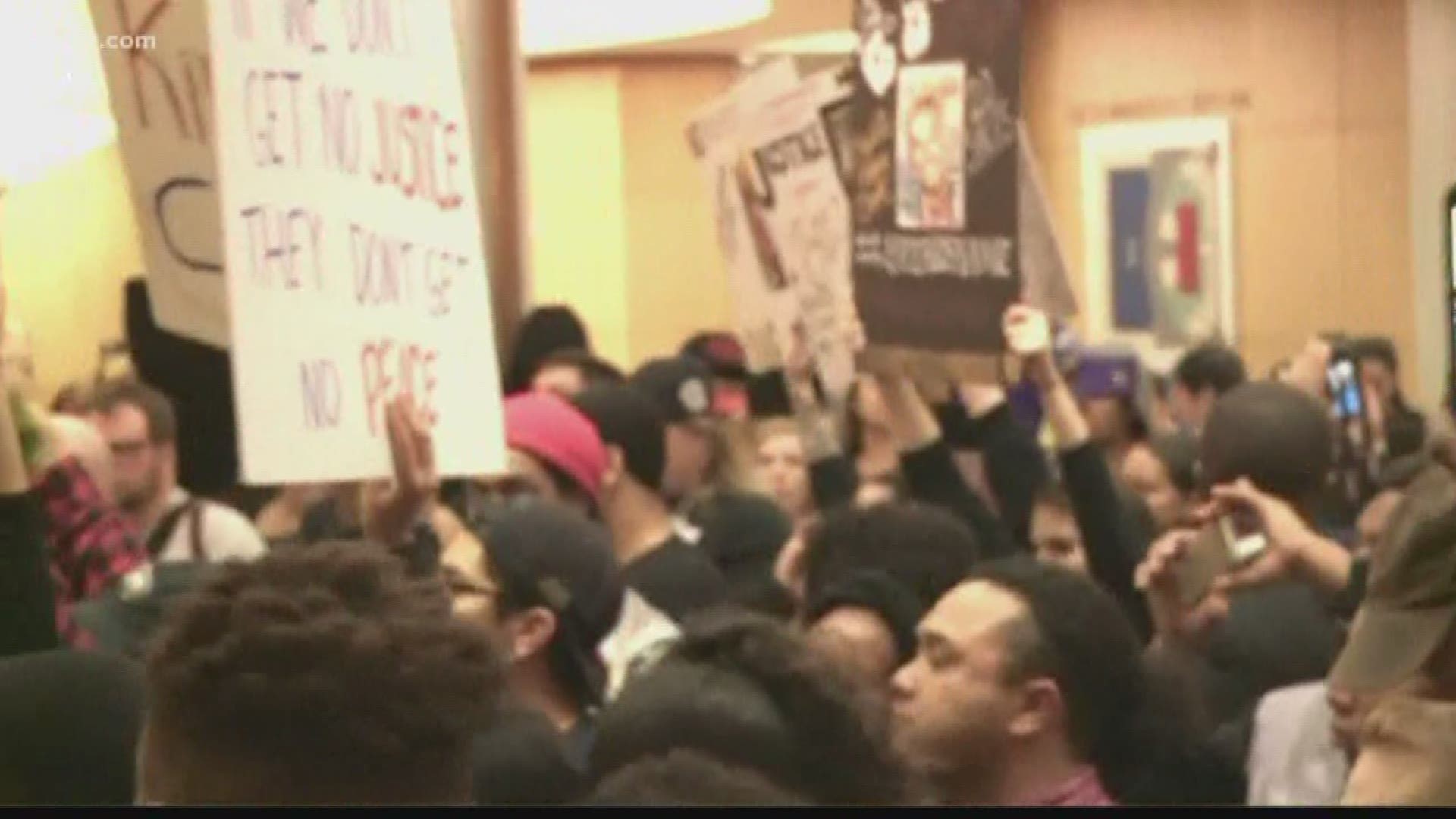 Mayor Steinberg says the City Council will not reconvene on Wednesday out of respect for Stephon Clark's family and his wake.

UPDATE: We have been notified the wake for #StephonClark will be tomorrow from 1-8pm. Out of respect for the family we will not reconvene tomorrow but are committed to ensuring you are heard and we will share information for future meetings as it becomes available. pic.twitter.com/KgauI50yjy

A man has been arrested during the protests outside City Hall. The individual was charged with assault on an officer and drunk in public, according to the Sacramento Police Department.

The City Council meeting has been abruptly adjourned by Mayor Steinberg due to safety reasons for the people inside and outside the building. One person has been detained during the protests, according to the mayor's office.

Tonight’s meeting shut down early because of safety. pic.twitter.com/glohOHvqQ5

Back at City Hall, where things are starting to get a little tense again. #StephonClark @ABC10 pic.twitter.com/qfibUWdu1c

Protesters continue to gather outside of Golden 1 Center to voice their displeasure and demand change from the Sacramento Police Department.

This is the message projected outside the @Golden1Center right now telling ticket-holders to go home #StephonClark @ABC10 pic.twitter.com/hQmL7Qidvp

The Kings game at 7 p.m. will be delayed due to the protests outside Golden 1 Center.

The organization released the following statement:

The safety of our guests is our number one priority. Due to law enforcement being unable to allow ticketed fans to safely enter the arena, the doors were closed to maintain guest and public safety.

We continue to work with law enforcement and City leadership to ensure the safety and security of fans and the public on Thursday and at future events.

The protests outside City Hall have largely moved to Golden 1 Center and people are blocking the entrances. The Sacramento Kings are scheduled to play against the Dallas Mavericks at 7 p.m.

Here we go again. Golden 1 Center has closed off the entrances due to #StephonClark protests. Kings and Mavericks tip at 7pm pic.twitter.com/5O6nKbubhZ

We’re looking at another small crowd tonight for Kings and Mavericks as Golden 1 Center is locked-down because of #StephonClark protests pic.twitter.com/vG1u8kQPSv

The protesters outside are now storming City Hall as the meeting continues inside. People forced themselves into the atrium as metal detectors fell down. The protesters are now on the City Hall desk service table chanting.

Clark's brother, StephonThe City Council meeting has hit a recess for 15 minutes after Stevante, took control of the heated discussion. Officers are now standing behind the City Council seats. 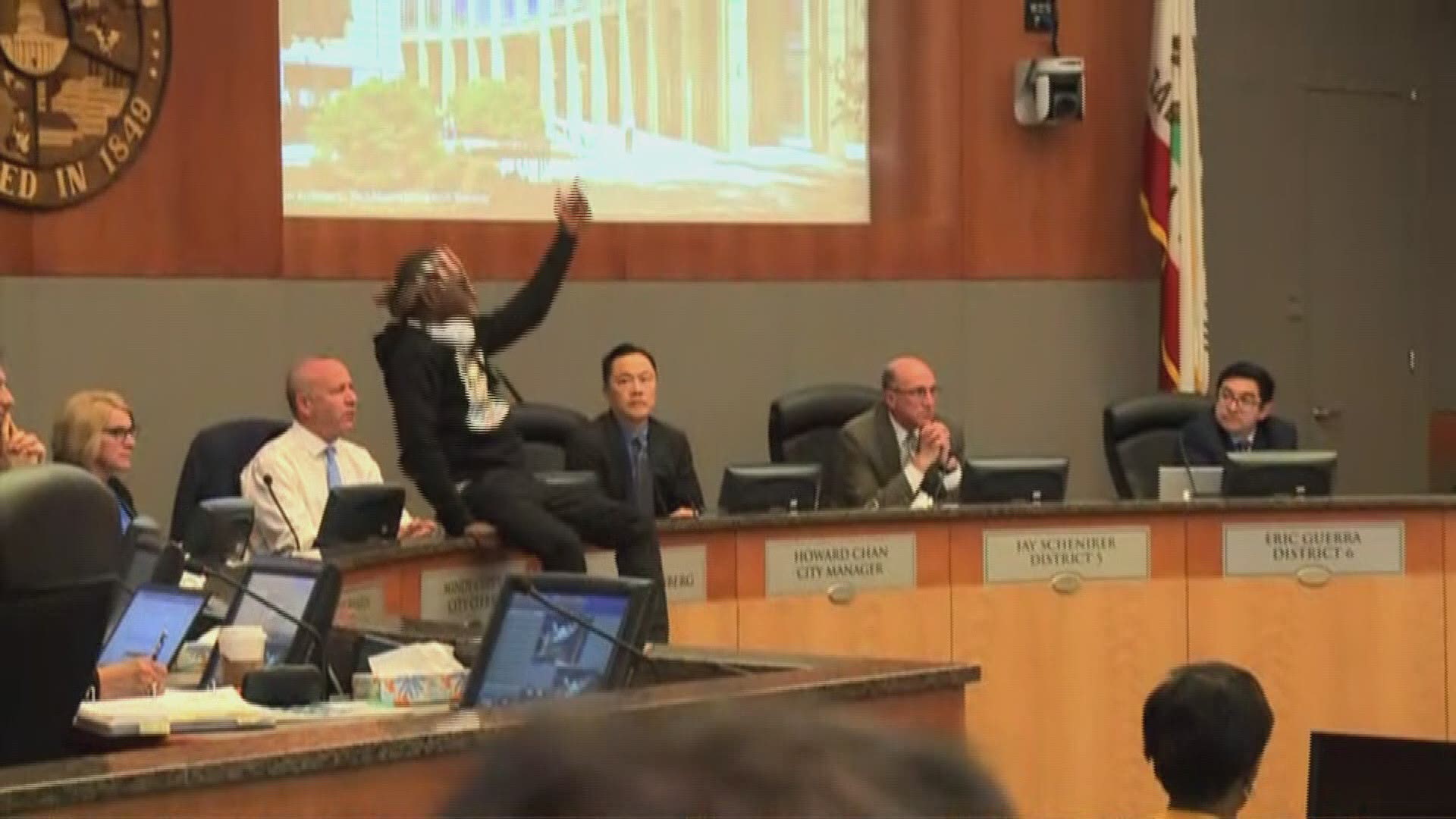 Update 5 p.m.The open dialogue has started at City Hall. A brief moment of silence was held to start the meeting to remember Stephon Clark. Update 4:30 p.m.

City Hall is now packed inside as residents gather for the meeting with city leaders. The chambers are now full with a capacity of 230 people.

30 min before the City Council meeting is set to start & the chambers are already full (capacity 230). People will be allowed into the lobby and also be able to watch from outside. #StephonClark @ pic.twitter.com/0UTDfWylQj— Frances Wang (@FrancesWangTV) March 27, 2018

The first meeting, scheduled for 1 p.m., focused on previously scheduled business matters. The second meeting, at 5 p.m., is dedicated to an open dialogue between the community and city leaders.

A 1 p.m. meeting is for City Council business matters that were previously scheduled for the evening meeting.

A 5 p.m. meeting is dedicated to an Open Dialogue with the Sacramento City Council.https://t.co/JtPo0L3ddG— City of Sacramento (@TheCityofSac) March 26, 2018

Both meetings will be broadcast with video and audio streaming within the City Hall lobby, as well as in the plaza area for overflow attendees. Seat opens to the public at 4 p.m. on a first-come, first-served basis. Once residents pass through security, they'll have the opportunity to sign-up to speak at the meeting.

Due to limited seating and the capacity within City Hall Council chambers, citizens are encouraged to post eComments to the meeting’s agenda or send comments to PublicComment@cityofsacramento.org.

Due to the expected high volume of residents expected to attend the meeting, the City’s Revenue Counter will close early at 3 p.m.