Francisco Munoz says he is trying to figure out how a memorial bike ride got so out of hand. 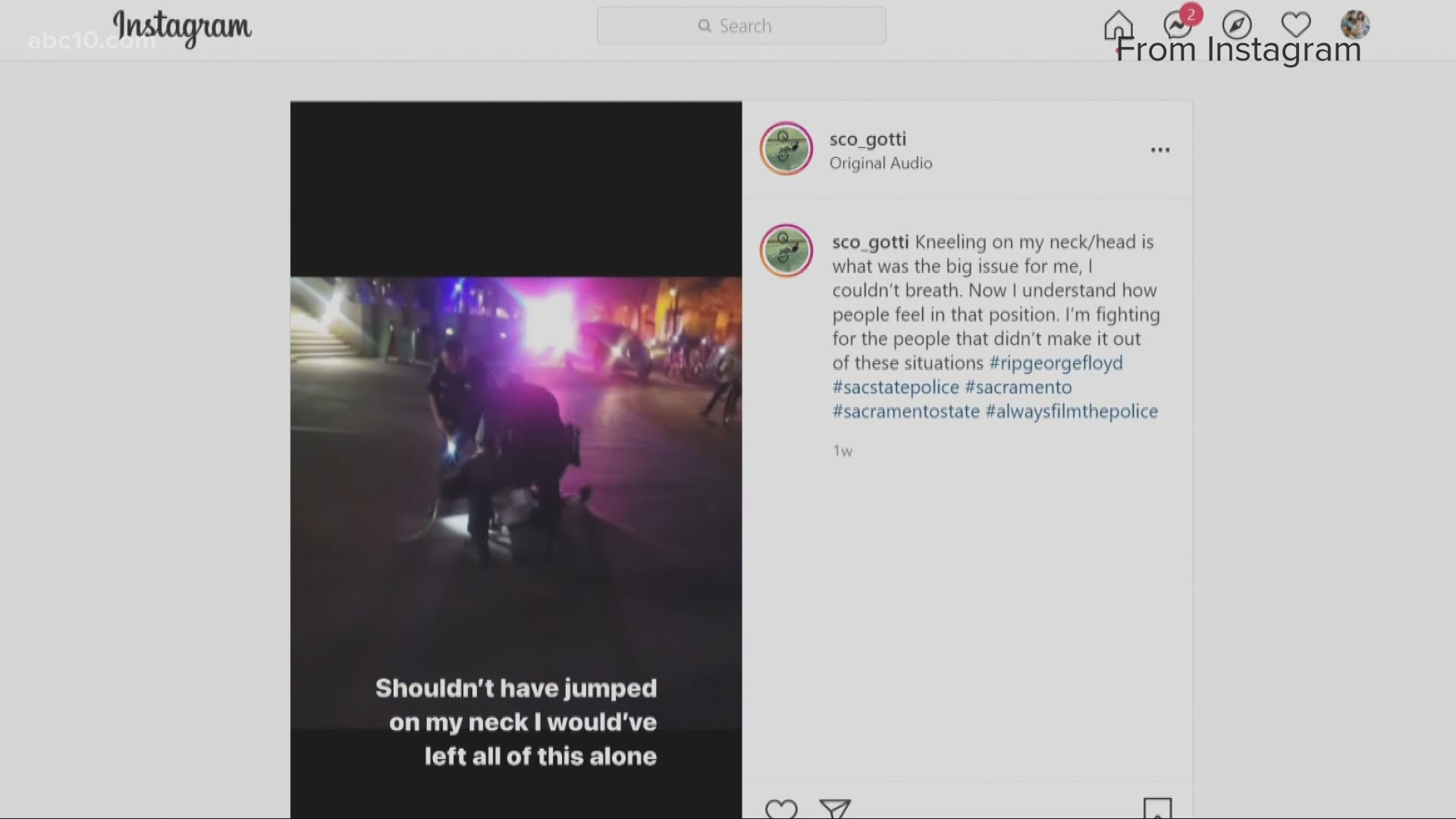 SACRAMENTO, Calif. — A Sacramento man is speaking out and sharing videos contesting a police report describing what happened on June 4, when a stun gun was used on him and he was arrested by police on the campus of Sacramento State.

Francisco Munoz, 26, said the initial police narrative was that he charged at an officer and stole a body-worn camera is false. The report described Munoz as being part of an angry mob closing in on the officers.

Initial reports to local media outlets claim the man arrested in the melee tried to punch officers and an officer's body-worn camera was stolen. Munoz was initially charged for allegedly stealing a body-worn camera.

The university's Chief of Police confirms that robbery charges against Munoz were dropped.

Munoz said videos he shared to Instagram show he was indeed loud, but within his right to film officers forcibly detaining a minor. He said the officers' conflicting orders made it difficult to comply and his human instinct to run kicked in when officers, in his opinion, continued to use unnecessary force.

"I just didn't want to get shot with whatever he was shooting me with," Munoz said.

In a series of videos posted to Instagram, Munoz is seen running away before being hit with a stun gun and dropping to the ground. Video shows an officer placing a knee on Munoz's neck while working with another officer to get Munoz into handcuffs.

Munoz says he is still trying to figure out how a memorial bike ride got so out of hand.

"I'm not the type of person trying to fight the police," Munoz said.

According to a police report obtained by ABC10, an officer called for help as he tried to disperse a large group of cyclists from campus. They were using an A-Frame sign to do stunts, according to both the police report and Munoz. The officer noted a minor popping a wheelie towards him and wrote: "I grabbed the handlebars to prevent the bicyclist from intentionally or accidentally hitting me."

After that, the officer wrote that he tried to restrain the teen.

Munoz says the group was on their way out, but the way the officer was handling the teen agitated the crowd and he started filming the encounter with his cell phone.

A sergeant reported he grabbed Munoz's cell phone after Munoz yelled and advanced towards an officer in a threatening manner, but Munoz said his video suggests otherwise.

"They could have been like, 'Hey we're going to be detaining you. Put your hands behind your back' [and] it would have been the end of it," Munoz said.

Instead, he said the officers gave him conflicting orders that made it difficult to comply.

"One was telling me to put my hands behind my back while pulling my arm one way, the other is telling me to get on the ground but I'm standing on my bike," Munoz said.

It was later discovered that the camera had fallen off and another person had picked it up and taken it. The camera has still yet to be recovered, according to Sacramento State Police Chief Mark Iwasa.

"We certainly don't take any pleasure in arresting people," Iwasa said, adding he could not comment on the actions of the officers as the department is following use of force protocol and reviewing the incident, but said the video clearly shows an unpredictable and volatile situation. "You can hear that was the environment surrounding just a couple of officers I had there, so I don't think it was a very safe environment for the officers either."

While the robbery charge has been dropped, Munoz still faces a misdemeanor charge of resisting, obstruction or delaying a peace officer. Munoz is scheduled to be arraigned in July. He says he is working to get the remaining charges dropped.

Munoz said he doesn't want to see a further divide between police and community members, but he's speaking out because he feels that the disconnect between him and police that night shouldn't have happened on a campus full of young adults.

"The biggest goal is that it doesn't happen to anybody else and people are held accountable for what they do, including myself," Munoz said.

WATCH NEXT: How does an officer mistake a gun for a taser?