The former mayor of Stockton, Anthony Silva, is in trouble with the law again; this time facing eight new felony charges in San Joaquin County. ABC10 has compiled an extensive list of Silva's legal issues, dating back to December 2012. 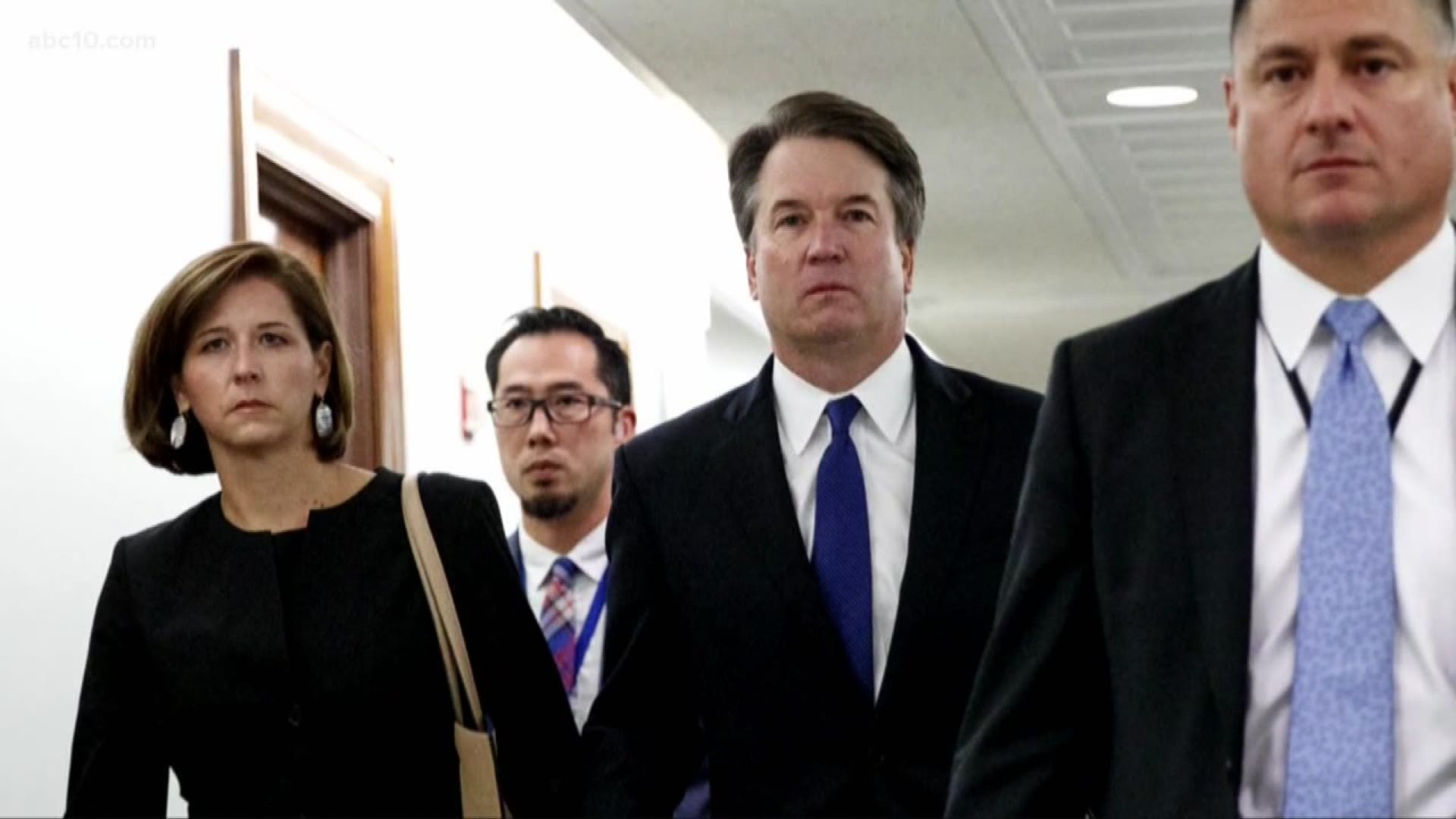 The former mayor of Stockton, Anthony Silva, is in trouble with the law again; this time facing eight new felony charges in San Joaquin County.

ABC10 has compiled an extensive list of Silva's legal issues, dating back to December 2012.

October 2018 – Silva was charged with eight new felony counts including grand theft embezzlement, embezzlement of a police officer, money laundering, conflict of interest, possession of a firearm and ammunition. His longtime associate and former associate Sharon Simas faces five of those eight charges too. Silva’s attorney said in a statement “My only statement at this time regarding the new charges filed against Mr. Silva is that we will fight any and all charges fully, and we believe 100 percent that Mr. Silva will be found not guilty.”

August 2017 – Silva took a plea deal in the set of charges involving his first arrest. He pled no contest to providing alcohol to a minor, settling a case that had also included three other charges related to a 2015 incident where he allegedly took part in a strip poker game with minors at the camp he ran in Amador County. Those other three charges were dropped. He was ordered to perform 40 hours of community service.

March 2017 – Silva was arrested at SFO as he was coming back from a vacation in South America. He left a day before FBI agents and San Joaquin County DA’s office investigators served search warrants on his home and the Stockton Kids Club. He is accused of mishandling money when he ran the Boys & Girls Club of Stockton (later re-named the Stockton Kids Club), resulting in six felony charges.

The DA said Silva ripped off hundreds of thousands of dollars from the Stockton Kids Club from 2010 to 2014. Prosecutors allege he pocketed the cash into his personal bank account. Silva pled not guilty. He has not gone to trial for this case yet – that’s expected to come this November.

November 2016 – Silva loses the Stockton mayoral race to Michael Tubbs, who wins with more than 70% of the vote.

Anthony Silva's arrest Thursday in Amador County is the most recent scandal to plague Stockton's mayor, but it's not the only scandal during his time in office -- it's not even the only scandal of the last week.

“I’m looking forward to seeing how many people will still vote for Silva considering what’s going on," Daly said, looking ahead to the tight November run-off election Silva faces against Council member Michael Tubbs. "He’ll have a higher number of votes than what you’d expect considering the gun situation and now his arrest.”

Here's a timeline of Silva's series of scandals, including that "gun situation," since he was elected mayor in 2012:

Nov. 2012 – Anthony Silva unseats incumbent Mayor Ann Johnston during a contentious time for the city. "We live in a fast food society, people want quick answers. The people there must be at fault," campaign consultant Don Parsons said at the time. "If they had something to do with it or not, goodbye."

After Silva took office, rumors of scandals in his past came to the surface, including a 2005 police investigation into Silva while he was on the Stockton Unified School Board. While working as Franklin High School's water polo coach, Silva was investigated for allegedly having alcohol, underage girls and a hidden camera in his home.

The matter was investigated by Stockton Unified School District Police, but the San Joaquin County District Attorney never filed charges. When the accusations resurfaced after his mayoral election, Silva said, "it's intent was to harm me and my reputation, if not to destroy my career and everything."

May 2013 – Anthony Silva goes medieval at State of City: Looking medieval for his first State of the City address, Anthony Silva began his speech in a warrior helmet and holding a mace. The look made international headlines at the time, with the UK's Daily Mail describing the stunt as a "dramatic pitch to reduce city's soaring crime rate."

At the time, Silva was pushing a controversial plan to raise the city sales tax in order to pay for a 120 new police officers, while the city was still in bankruptcy. Fellow city council members and Stockton's city manager at the time strongly opposed Silva's proposal.

June 2013 - Sexual battery allegation surface: Long before becoming the Mayor of Stockton, Anthony Silva took the job of running the local Boys and Girls Club. During that time, a 19-year-old woman claims she was at Silva''s home and something inappropriate took place.
The incident allegedly happened at least five months earlier than the report filed on February 2012, during the summer of 2011.

A Stockton police reports states the woman, under 21, claims she was offered mixed alcoholic drinks and when she refused Silva's advances he became adamant and insistent. The woman claims Silva grabbed her while she was sitting on his bed, he pulled her across his lap, spanked her buttocks and told her she was being a bad girl.

The chairman of the Boys and Girls Club at the time, Guy Hatch, said the case against Silva fell apart because the alleged victim had been fired and the police report was an act of revenge.

July 2013 - Accused of recording private conversation: While speaking at a city council meeting, Mayor Silva told City Manger Bob Deis he could play for him a private discussion the two had. Silva refused to comment or explain what he meant by that, but it is is a crime to record a conversation without the consent of both parties.

Dec. 2013 - Council votes to admonish Silva: Silva took to Facebook, like he often does, to announce he had successfully negotiated a contract with a new city manager. However, the city attorney said that information was confidential and Silva's Facebook post was a violation of the Brown Act's rules on closed session meetings.
Silva and Vice Mayor Paul Canepa were the only 'no' votes to the admonishment, which simply acts as a reminder to the mayor to obey the Brown Act and keep certain things confidential.

March 2014 - Controversial badges: Silva was criticized for ordering eight badges for his security staff that resembled official police badges, which he did not have proper licensing for. Silva turned the badges over to Stockton police on Friday, March 21. The mayor maintained he did nothing wrong and indicated he was disappointed at all the attention the badges received.

Nov. 2014 - Silva campaigns against his council peers: The mayor actively campaigned against two incumbent city council members he accused of blocking his efforts to improve the city. Council member Elbert Holman won his 2014 re-election campaign, but Dyane Burgos Medina lost by 7 points to Silva-endorsed newcomer Christina Fugazi -- who was ultimately appointed by Silva to the vice mayor position.

May 2015 - Sued over limo trashing: After a night out at a Sacramento club, Anthony Silva and a few other people were driving back to San Joaquin County in a rented limo when a fight erupted. According to a lawsuit filed by the rental company, the limo was trashed. The suit named five people, including the mayor, and accused them for not paying for the damages about five months after the alleged incident. Silva's lawyer at the time said he had nothing to do with any of the damages made to the limo.

Sept. 2015 - Silva’s laptop and cell phone confiscated: After a week-long trip to China, Mayor Anthony Silva was detained at the San Francisco International Airport. He had his laptop and cell phone confiscated by airport officials and was stopped and questioned. Silva said the same thing happened to him two month earlier when he came home from Mexico. He said officials asked him about his last minute flight reservations and his purpose for traveling to China.

Silva said at the time he thought it was simply a random search. "I''ve been told it is and it just happens the difference is is I'm a mayor," Silva said, "so when something random happens to me, they make a bigger deal about it. But I expect to be treated the same as everybody else."

April 2016 - Guns stolen from Silva's homes: The Stockton mayor confirmed he was robbed twice, both incidents involving gun theft. According to Silva, the fist time he was robbed was in 2014 when a house he owned, but did not live in, was broken into. The suspect(s) stole several items from the home, including a gun.

The second time Silva was robbed was in February. He said someone broke into his home while he was in the Philippines and stole a gun from his closet. Silva said both of the stolen guns were locked, and were not able to be used by the suspects.

July 2016 - San Joaquin Co. DA says Silva's gun used to kill a teen: 13-year-old Rashawn Harris was killed on February 23, 2015 while standing in his driveway in south Stockton. The San Joaquin County District Attorney's Office has confirmed the gun used in the shooting death of Harris was registered to Silva. According to the district attorney's office, Mayor Silva reported his gun stolen on March 22, 2015. The gun was then recovered by Stockton police on June 9 after it was found during a domestic disturbance investigation.