John Burris, the attorney for the family of a then 17-year-old, announced he is filing a lawsuit against the Stockton Police Department. 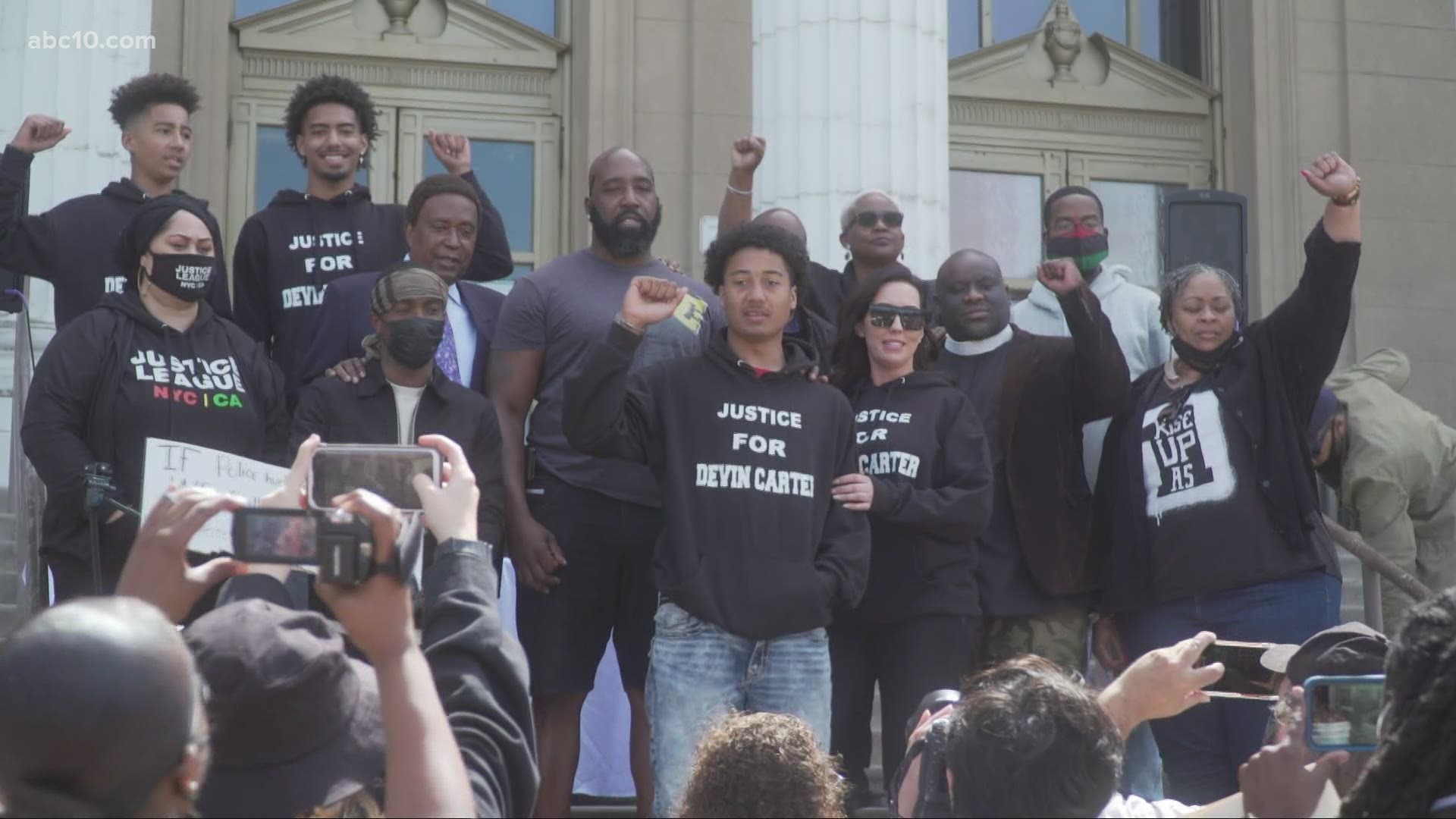 The teenager who accused Stockton Police officers of excessive force spoke with the media about his arrest during a news conference where his family announced they would be suing the police department.

Devin Carter, who was 17 at the time,  told ABC10 he was afraid of his life during his encounter with Stockton police.

"When I was getting beat the way I was, all that was going through my mind was all of this black lives matter and George Floyd, and there’s a possibility I could die,” Devin Carter said.

The video the teen's attorney, John Burris, released is too dark to make out many details, but Devin Carter could be heard in the video, screaming, "I'm not resisting," as police officers shouted at him to give them his hands to be handcuffed.

Burris released the video after Stockton police refused to while saying Devin Carter was underage at the time. Burris said he wanted the public to know what happened that night. Stockton police chose not to comment on the lawsuit.

George Carter, Devin Carter's father, told ABC10 their family has nightmares because of the incident, which left a footprint bruised into his son's face.

"No Parent should hear their child screaming, yelling, crying about their not resisting arrest while the officers have their script saying, stop resisting while we're punching you," George Carter said.

Stevante Clark, the brother of Stephon Clark who was killed by Sacramento police, showed his support for the Clark family during the Saturday news conference.

"I've promised to stand with Devin for life," Clark said.

The attorney for the family of a then 17-year-old who accused Stockton Police officers of excessive force announced he would file a lawsuit after releasing a body cam video of the arrest Friday evening.

Devin Carter, 18, was arrested after being pulled over by Stockton police allegedly speeding just before 8:30 p.m. on Dec. 30, 2020. Police said, at the time, Carter was driving "erratically and speeding in excess of 100 miles per hour."

Carter led the police on a chase, with one officer crashing into a bystander before the chase stopped.

The video the teen's attorney, John Burris, released is too dark to make out many details, but Carter could be heard in the video, screaming, "I'm not resisting," as police officers screamed at him to give them his hands to be handcuffed.

Burris claims he never saw a police officer beating as outrageous since he defended his former client Rodney King, who the Los Angeles Police Department beat in 1991.

“These vicious cops acted like a pack of wolves, and Devin was their evening meal," Burris said.

Two of the Stockton Police Officers involved in the arrest were fired after an internal investigation into alleged excessive force.

ABC10 reached out to the Stockton Police Department for comment but has not heard back as of publication. Stockton Police Chief Eric Jones said at the time after the arrest that he wants to hold his department accountable.

"Striking somebody around the head and the neck can deliver very serious, serious injuries and so the use of such should only be used in very limited situations, in this case, I found it was not warranted when such was done," Jones said.