The 18-minute surveillance video, which displays two different camera angles, does not show the altercation but does show Jacob Servin's bloody clothes and injuries. 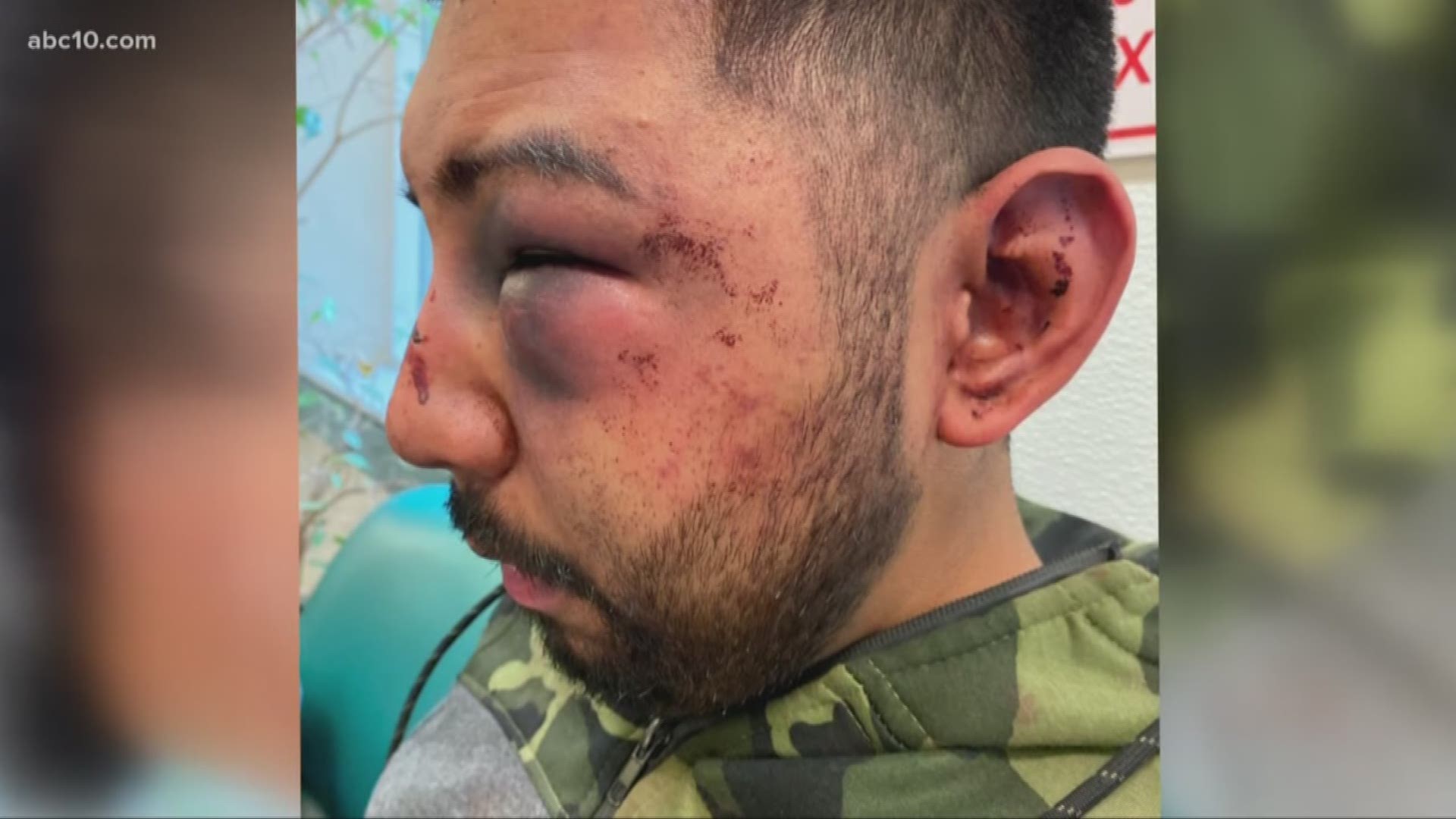 STOCKTON, Calif — About three days after a Stockton man accused San Joaquin County correctional officers of beating him and calling him racial slurs in jail, the county sheriff released video showing the man being walked out of a cell — bloody.

Jacob Servin told ABC10 Wednesday that he was leaving a bar early Monday morning when he was arrested by Stockton Police officers and taken to the San Joaquin County Jail for booking.

The newly released surveillance video from inside the jail's booking area appears to show that same transaction — Servin takes his booking photo, is handed to correctional officers inside the jail, and walked to the back to a holding cell while wearing handcuffs.

Servin told ABC10 that's when three officers assaulted him for "like 20 minutes," and repeatedly called him "terrorist" and "Arab." Servin said he is of Mexican and Native American descent.

Credit: ABC10
This composite image shows a side-by-side of Jacob Servin before and after his booking in the San Joaquin County Jail. The 29-year-old Stockton man says he was beaten and called racial slurs by deputies at the jail.

The 18-minute surveillance video, which displays two different camera angles, does not show the altercation with Servin and San Joaquin County officers, nor does it have audio. The sheriff's officials said the officers were not wearing body cameras.

Time stamps from the video show Servin, who appeared to be non-combative, being escorted to the holding cell at 1:08 a.m. Monday morning. About 20 seconds later, Servin appears to be taking his shoes off before being walked into the holding cell by three officers.

About four minutes later, more officers are seen walking toward the holding cell, some appearing to go into the cell and others standing on the outside.

Three minutes later, at about 1:16 a.m., the surveillance video appears to show eight correctional officers walking away from the holding cell.

At 2:23 a.m., Servin is seen being walked out of the cell with a visible limp, blood stains on his gray sweatpants and green jacket. As Servin walks closer toward the surveillance camera, his face injuries can be seen.

The San Joaquin County Sheriff said the altercation between officers and Servin happened after handcuffs were removed inside the cell. 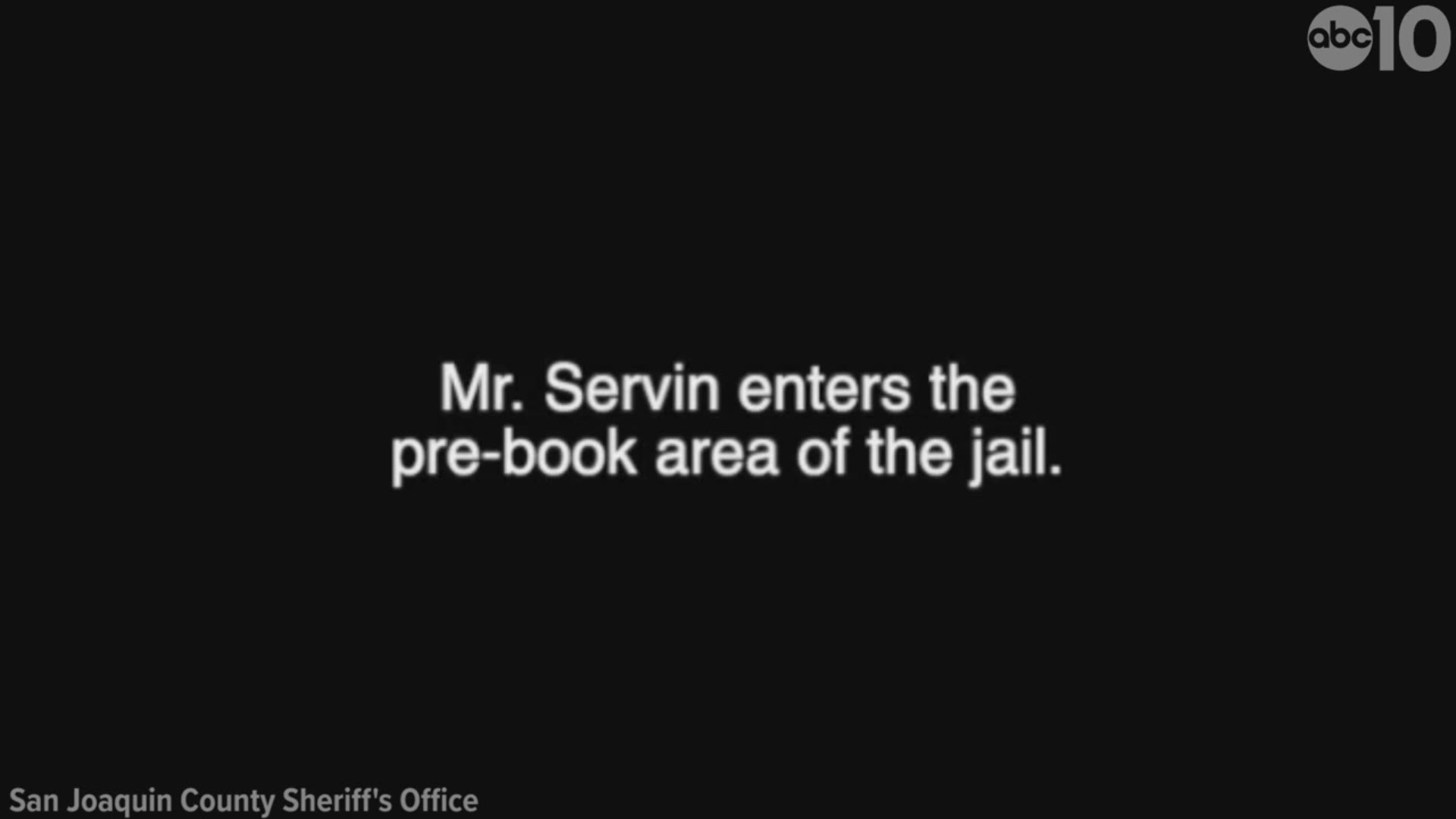 "Once the handcuffs were removed, Mr. Servin became physically aggressive and combative with the correctional staff," the sheriff's department explained. "As mentioned previously, he was taken to a local hospital where he refused medical treatment."

Because of California state law, surveillance cameras are not allowed in temporary holding cells as to allow inmates privacy to disrobe or use the restroom. San Joaquin County Sheriff's spokesperson Detective Andrea Lopez told ABC10 that officers put Servin in that cell because he "chose not to answer questions during the pre-book process."

"The purpose of the screening questions is to make sure they will be safe in our facility," Lopez explained. "...If they do not answer the questions we cannot guarantee that they would be safe in our lobby with our general population inmates."

Lopez said people booked who are contagious, intoxicated, or gang affiliated are among those who would be placed into a similar holding cell in which Servin was placed.

Servin was released from the jail Monday afternoon after being charged with five counts of battery on a custodial officer.