Officer Jimmy Inn, 30, was hired by the Stockton Police Department in 2015. 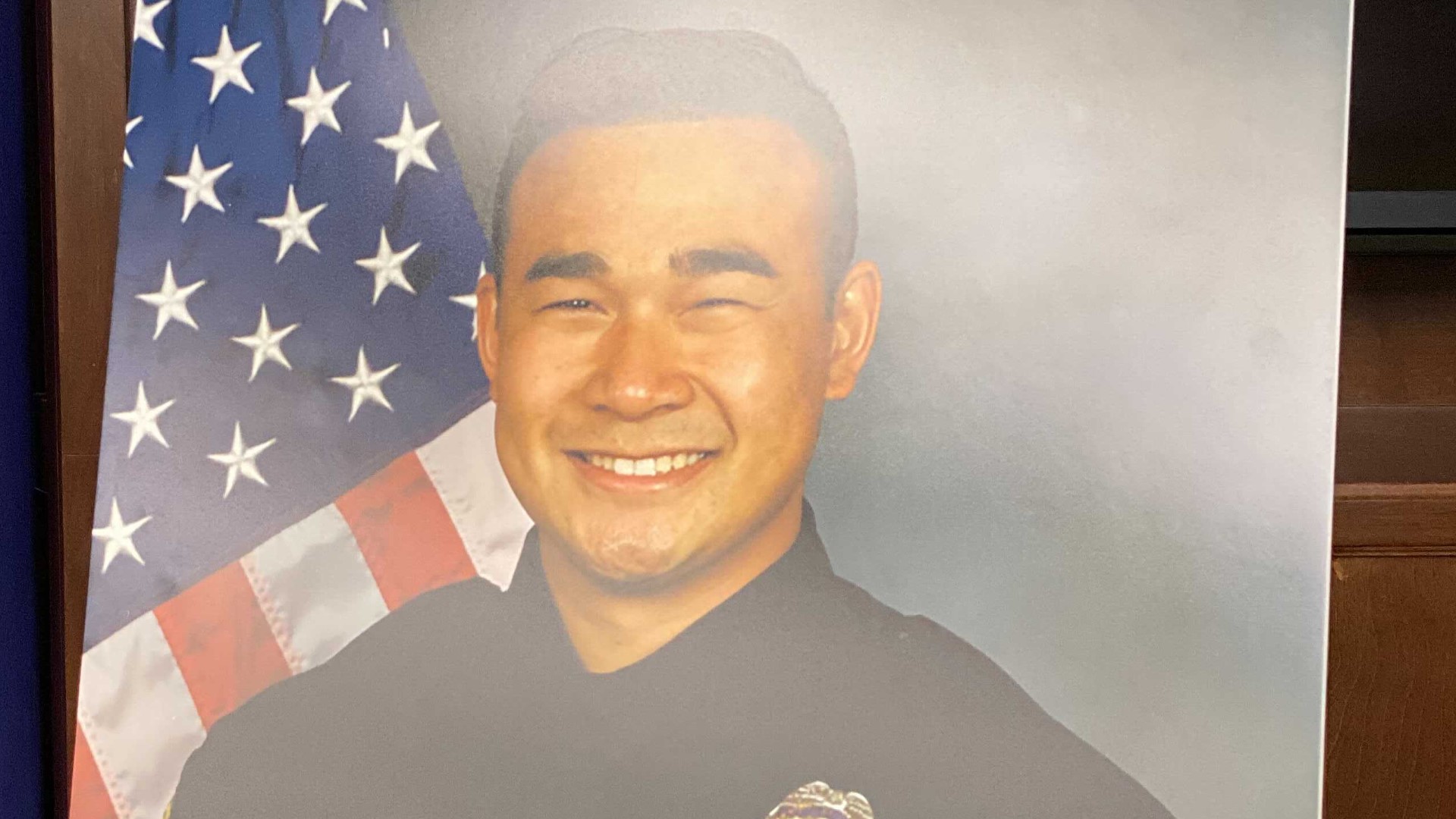 Stockton Police have identified 30-year-old Lance Lowe as the suspect involved in an alleged domestic violence situation that turned into a deadly shooting, claiming the life of Officer Jimmy Inn.

According to a Facebook post from the police department, the woman that a witness claimed to have seen screaming and bleeding with a ripped shirt walked away from the home before police arrived. Officers are searching for that woman to get her statement about what happened.

Stockton Police say Inn knocked on the security door and stood off to the side when a voice from inside the residence said, "hey police" and Lowe opened fire on Inn, hitting him multiple times.

Stockton Police Officer Pancho Freer says he arrived as gunshots rang out and saw Lowe standing over Inn with a gun in his hand. Police say Lowe then began shooting at Freer, hitting his patrol car. After Freer began shooting back at Lowe, the suspect walked back inside his home and later returned with his 8-year-old son in the front yard.

According to police, Lowe began to strangle his son in front of police and when he didn't listen to Freer's orders to stop, a community member tackled him, freeing the child.

Inn and Lowe were taken to a nearby hospital for treatment where they both died.

Lowe's son was checked out by medical officials and released to his mother.

When officers searched Lowe's home, they say they found another gun inside.

Officer Freer will be placed on a three-day paid administrative leave following the shooting.

Stockton Police Chief Eric Jones provided an update on the shooting death of an officer and the suspect of a domestic violence incident Tuesday.

"He was positive, an optimistic person, so very well-liked around the police department," Jones said about Officer Jimmy Inn. "The epitome of what a Stockton police officer should be."

Inn was shot when he responded to a disturbance call that came in around 9:45 a.m. The caller said he heard screaming and saw a woman bleeding, with a ripped shirt and "appeared to have been assaulted," Jones said in the press conference.

Inn got to the scene at around 10:07 a.m., according to Jones, and was in front of the home when he was shot by the suspect, a Black man.

"It was violent, blatant and very sudden assault on our police officer," Jones said.

A second officer arrived while this was happening. Jones said they believe this officer exchanged gunfire with the suspect before the man briefly went into his home and came out with an eight-year-old boy.

"The suspect began to strangle the young boy in front of the officer and refused to comply with his commands," Jones said.

A community member then attacked the man holding the child as the officer approached. The officer then shot the suspect, believing he was trying to kill the child, according to Jones.

Officer Inn and the suspect were both taken to hospitals where they died from their injuries.

The investigation is ongoing and Jones did not provide an update on what happened in the domestic dispute.

Stockton police have identified the officer that was killed in Tuesday morning's shooting as Jimmy Inn. Inn was 30 years old and hired by the Stockton Police Department in December 2015.

He was assigned to the Field Operations Division and was also a member of the Stockton police Honor Guard.

Inn leaves behind a wife, who is also a Stockton police officer, and three kids, a 7-month-old son, a 12-year-old stepdaughter and a 14-year-old stepson.

Stockton Mayor Kevin Lincoln posted a video on Twitter about the shooting, saying that the city of Stockton suffered a loss.

"At this moment our community grieves the loss of one of our very own Stockton police officers," he said in the video. "This is a time for us to come together, to surround and support one another and to pray for the strength, healing, comfort and peace for all that have been impacted by this great tragedy."

Stockton Police Chief Eric Jones will provide an update on the shooting in a press conference at 4 p.m.

Authorities are investigating a shooting in Stockton Tuesday that left an officer and the suspect wounded.

The shooting happened in the 4400 block of La Cresta Way in Stockton, according to a tweet from the Stockton Police Department. The department tweeted about it around 10:40 a.m. The shooting took place in a residential area off Bianchi Road and near the Calaveras River.

The Stockton Police Department tweeted at about 11:30 a.m. that one police officer and a male suspect were shot and both were taken to a nearby hospital.

Stockton police tweeted at around 1 p.m. that both the officer and suspect died from their injuries.

There is currently no information on what happened in the shooting or how many officers were involved.

The Stockton Police Department is asking people to avoid the area.

Stockton police will hold a press conference later in the day on Tuesday about the shooting.

This is an ongoing investigation and more details will be provided as they become available.

SPD News: OIS Update
We can confirm that one Stockton Police Officer and one suspect, a male, have been shot. Both were transported to an area hospital and their conditions are unknown. We will release more details when they become available. pic.twitter.com/oCLDlHOO69

Some 30 people gathered in Stockton’s Victory Park to reflect on recent police killings of people of color across America.