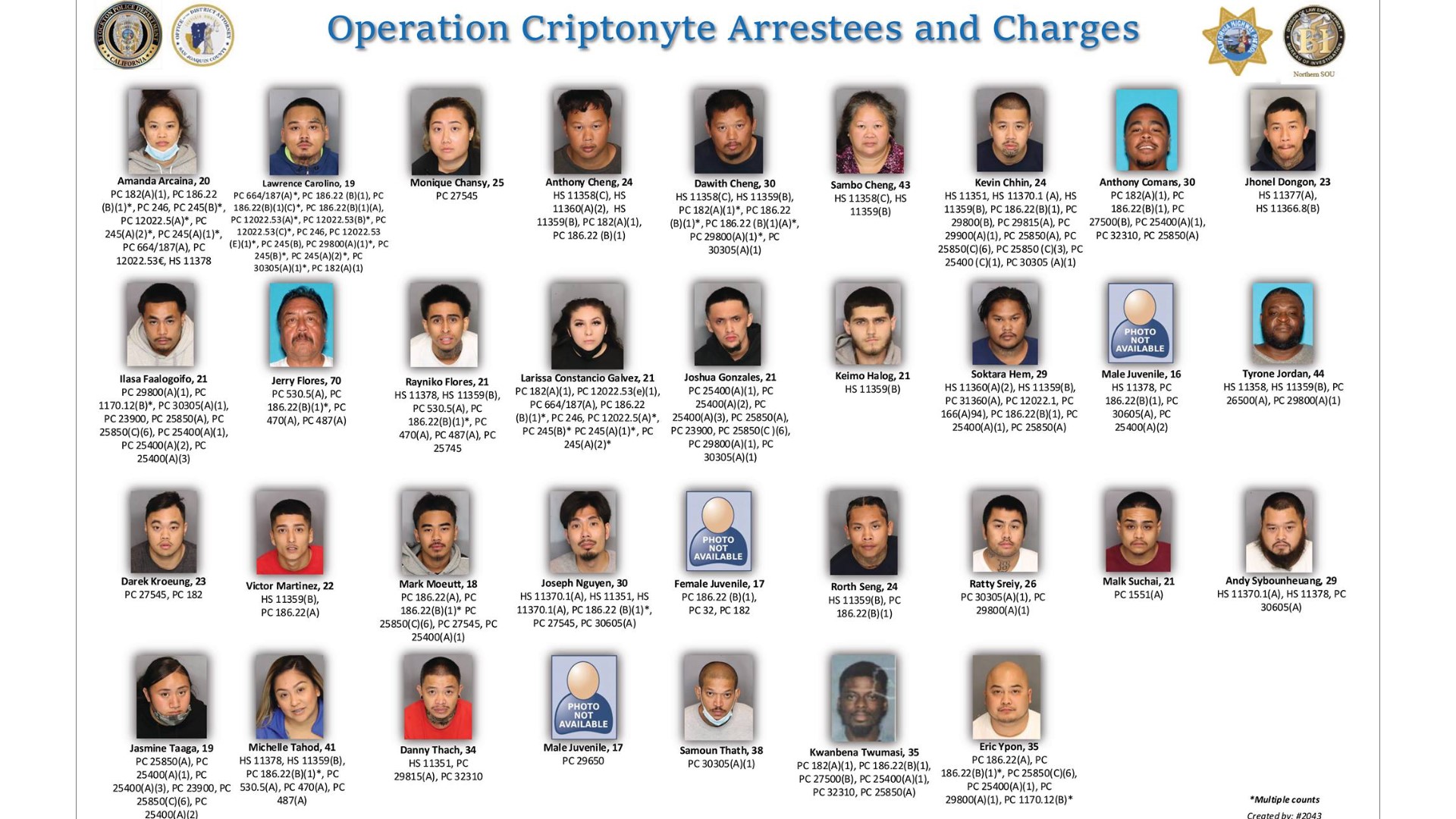 STOCKTON, Calif. — The Stockton Police Department announced on Thursday the success of "Operation Criptonyte," which aimed at disrupting criminal street gangs in the city of Stockton.

The ongoing investigation, which began in June 2020, has resulted in 55 search warrants, 38 recovered firearms, $40,000 seized, and 34 people arrests related to various criminal activities. In a post on Facebook, Stockton police said it anticipates more arrests in the future as officers continue to crackdown on gang-related crime.

"Part of our gun violence intervention strategies is to identify those groups individuals who continue the gun violence in Stockton putting our entire community at risk," said Stockton Police Chief Eric Jones.

Law enforcement also confiscated what is suspected to be roughly one pound of cocaine, five pounds of methamphetamine, 1,300 pills of ecstasy, and "an abundance of marijuana," according to the statement.

“Families in Stockton can breathe a little easier tonight,” said California Attorney General Xavier Becerra in a statement. “This investigation and resulting arrests and seizures are an example of what happens when California law enforcement agencies work together to combat violent crime in our communities."

The Stockton Police Department's Gang Violence Suppression Unit worked with a number of agencies on Operation Criptonyte, including Sacramento, Modesto, and Manteca police departments. Increased violence in the last two years in Stockton involving gang members of these groups led to the crackdown.

"When they see this they see those guns. They think they can check 'em to see if they match-up with the guns their loved ones were killed with," said Tuhn.

"We really do believe that typically a couple of these types of operations per year is what is going to make our community safer and continue to work on our efforts to combat gun violence," Jones said.

The investigation was mostly aimed at certain street gangs in Stockton: the Asian Boyz, Muddy Boyz Crips, Lil Ruthless Criminals Comstocc Crips, Loctown Crips, and Asian Crips, SPD said. The Facebook post went on to say that these groups were working together in part to benefit the Crips street gang as a whole, though investigators learned that some alliances had ended and other rivalries had begun, which proved to be valuable information.

The department highlighted some of its arrests as a result of the investigation: