Ladybugs are used for pest control in organic gardens and they eat bad bugs. Ladybug harvesters collect them in the fall and sell them during the spring gardening season. It's a lucrative business, but its technically illegal and the reason is complicated. 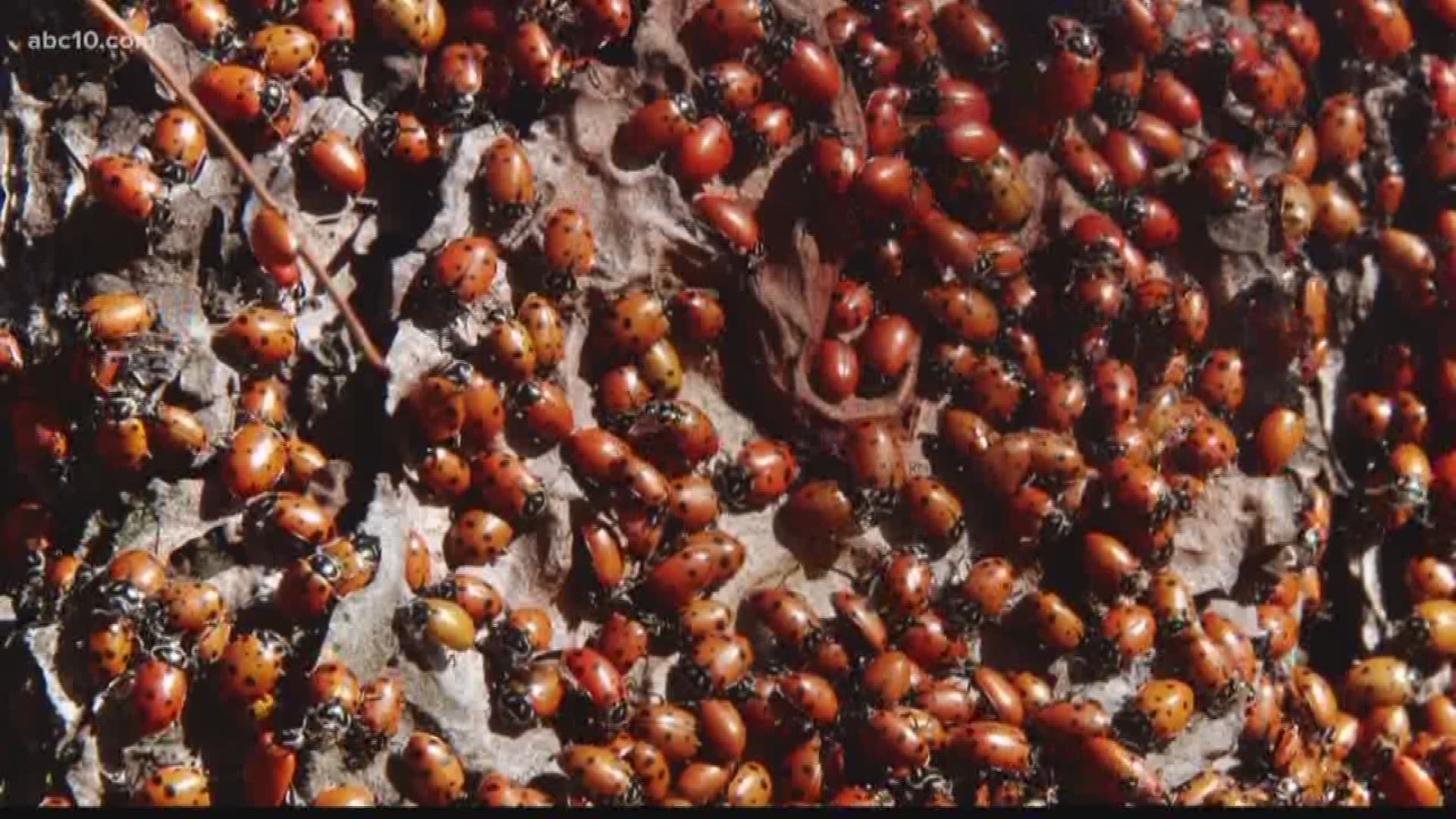 The red and black beetles are used for pest control in organic gardens and they eat bad bugs. Ladybug harvesters collect them in the fall and sell them during the spring gardening season. It's a lucrative business but its technically illegal and the reason is complicated.

Most ladybugs sold in gardening stores come from federal forests in the Sierra foothills. They are called Convergent Ladybeetle and they are very hard to find.

Chris Gilcrest hunted the insect for 18 years in the Stanislaus National Forest.

“In the Fall, they come to these mountains to hibernate,” said Gilcrest. “Ladybeetles are really picky where they land.”

Before the snow falls, ladybugs gather at the base of trees to hibernate. This makes it easy for harvesters to grab handfuls of ladybugs and put them in buckets.

“Sometimes it's like grabbing dollar bills" exclaimed Gilcrest. “You can grab $10 or $20 worth at a time depending on the area.”

The increased popularity of organic food is driving up the price for ladybugs. Farmers and gardeners are replacing pesticides with ladybugs because they are a natural predator to crop damaging bugs like the aphid.

This is where things get complicated.

Most Convergent Ladybugs are harvested on National Forest or U.S. Forest Service land.

In the past Gilcrest and other ladybug harvester used to get a gathering permit from the US Forest Service. That changed in 2015 when the permit process was transferred over to the Departments Fish and Wildlife Service in each state.

Here lies the new problem... California does not have a ladybug permit and technically it's against the law to commercially harvest any wildlife without a permit.

“Now when you buy ladybugs you are buying poached ladybugs."

Gilcrest says he was warned by a forest ranger not to harvest on federal land until he had a permit. He spent the next year trying to get one from the California Department of Fish and Wildlife.

“It was hard for me to get answers,” said Gilcrest.

The reason behind the permit transfer problem is also complicated. Basically, it's a jurisdictional mix up. The U.S. Forest Service manages plants and minerals on Federal land, but wildlife, including insects, are supposed to be managed by each state's wildlife department. In the case for the ladybugs, the Federal government was permitting something that the California was supposed to manage.

The ladybug permit swap happened fast and the California Department of Fish and Wildlife has been slow to react.

CDFW spokesperson Andrew Hughan says its not as simple as printing up some new permits.

“Fish and wildlife regulations can go one of 2 ways. With the legislature or the commission, itself,' said Hughan. “If someone wants to make a change they go to the commission, there is a lot of paper work. The Fish and Game would review that and decide yes or no.”

Hughan says making new regulations can take up to 3 years. Longer if scientific studies are needed.

This leaves ladybug harvesters in a legal gray area.

The Fish and Wildlife service regulates wildlife (including ladybugs) on private and public land.

It's not clear if “selling ladybugs” without a permit is considered poaching.

"Poaching is a strong term,” said Hughan. “We don't use it unless its enforceable. Right now, there is no regulation on ladybug harvesting or selling... So, they are probably going to continue doing it... Are we going to work on a solution? Yes! Absolutely."

The CDFW is currently in the beginning stages of making new regulations, but there is one more thing you should know about ladybugs. They may not be effective.

At least that's according to Colene Rauh. She is a master gardener with the University of California extension cooperative in Sacramento.

“They just don't stay that long.” Says Rauh. “All the science I have read is that ladybugs stay for a while then leave.”

“It is hard to get them to stay if you just dump them in your garden,” said Rauh. “You can attract ladybugs naturally. We have a whole list of flowers or plants ladybugs are attracted to.”

Regardless of the scientific studies the ladybug is a beneficial insect. They do eat aphids and other eat pesky bugs. That's why Gilcrest and other ladybug harvester believes gardeners should have the choice to use them if they want.

For now, the California Fish and Wildlife they will take the harvest on a case by case basis.

“The ladybug collection/sale is a gray area… we would prefer that they don't do it but, we are not going to stop commerce. We want to help people,” said Hughan.