'This is chaos': How a peaceful protest gave way to a night of fury, from start to finish

An extraordinary night of defiance, anger, violence and destruction unfolded in Atlanta on Friday. 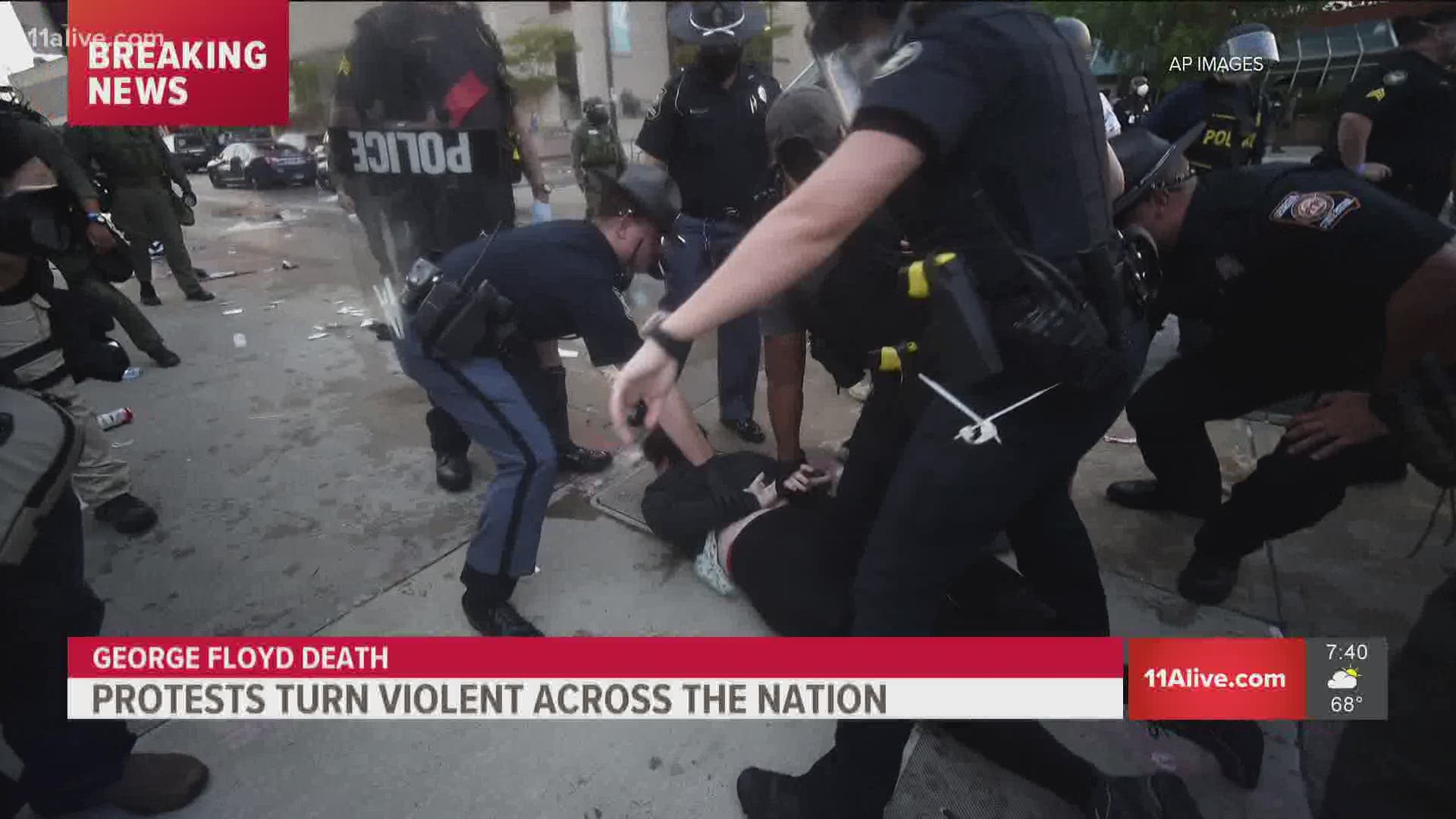 ATLANTA — By the time Gov. Brian Kemp activated the Georgia National Guard shortly after midnight, much of the damage had already been done.

It was one final, extraordinary act to restore order on a city that had, for hours, convulsed with fury.

This is a trying moment in America - more trying, probably, than any in our collective memory. We've lost more than 100,000 lives in a historic pandemic, fallen under a practical Great Depression and, now, once again, the fault lines that mark the steep, searing inequities black Americans face have cracked, deeply.

The death of George Floyd, and before that the killings of Ahmaud Arbery and Breonna Taylor, has proved a final straw for people who've endured incredible trauma in recent times and throughout history.

RELATED: 'Go home' mayor pleads, 'This is not Atlanta'

In Atlanta on Friday, and in other cities around the country, the simmering mix of anxiety, fear, frustration and anger that has bubbled beneath the surface of American life these last weeks and months boiled over into rage.

Here's how a demonstration of organized, peaceful defiance gave way to a night of what Mayor Keisha Lance Bottoms called "chaos."

Thursday: In a way, you could say it really started the night before. As Minneapolis cleaned up from a destructive night of protests and prepared for what would be another night of demonstrations that resulted in, among other things, the burning of a police precinct, plans were formed for a march in Atlanta.

Fliers began circulating under the banner #ATLFORUS, and included a detailed outline for how the march was to proceed. The organizers prepared guidelines for the protest that included, among others, "Do not incite violence," and "Do not destroy property."

Friday, afternoon: The plan, according to the fliers, was to begin arriving at Centennial Park in the afternoon to make signs and distribute water. Instagram posts showed they were there doing so at around 2:15 p.m.

By about 3 p.m., hundreds of people had gathered at the park, with hundreds more on their way. According to plan, they began marching from the park to the capitol building at around 3:45 p.m.

After weaving along the march route through downtown Atlanta, most of the protest arrived at the capitol by 4:30 p.m.

After a short demonstration at the capitol, many of the protesters returned to Centennial Olympic Park by about 5 p.m.

Friday, evening: As the protesters returned to the park, they gathered for a final, powerful display at about 5:15 p.m. - a moment of silence and a show of solidarity, hundreds of heads bowed and fists raised into the air.

Running remarkably on schedule, the protest was, at that time, effectively over.

The remaining vacuum would soon start to be filled a short distance away, outside the CNN Center.

Beginning around 5:30 p.m., as the protest splintered, a group began to confront police, who were massed on Centennial Olympic Park Drive, cutting off access down the road leading to State Farm Arena and Mercedes-Benz Stadium.

RELATED: Bottoms: 'What we saw overnight was not a protest, and it was not Atlanta.'

At 5:39 p.m., 11Alive's running account of events noted that "tussling appears to be breaking out outside the CNN Center." Two minutes later, at 5:41 p.m., we noted what appeared to be the first protester taken into custody.

A nervous, tense sort of truce took hold for the better part of the next hour.

At about 6:20 p.m., Atlanta Police Chief Erika Shields stepped into the crowd and addressed protesters.

At about 6:30 p.m., both Mayor Bottoms and Gov. Kemp released statements encouraging the protesters to remain peaceful.

At roughly 6:45 p.m., Shields said from the crowd, "People are upset, they're angry, they're scared. I get it. They want to be heard." Around that same time, police began to try to disperse the crowd, with military-style vehicles arrive and pushing the crowd back.

Shortly after 7 p.m., the composure of the situation began to fray, and unrest began to take hold. People spray painting and climbing onto the CNN letters, while others threw bottles and other items at the police.

At about 7:25 p.m., the protesters burned an American flag outside the CNN Center.

Minutes later, a window at the CNN Center entrance was broken.

At 7:40 p.m., Atlanta Police released a statement which said, in part, that protesters had surrounded a patrol vehicle and that the arrival of more officers to move them away from the vehicle "led to a number of scuffles between police and protesters" as well as three arrests at that time.

The statement said that it appeared "pepper spray was utilized several times during the confrontation."

"Currently, we are attempting to allow the protesters to continue with a peaceful demonstration. Officers have been subjected to water bottles, eggs and other items being thrown at them," the statement added. "However we remain hopeful this activity will cease and there will be no need for further arrests or clashes with protesters."

Friday, night: As police and protesters continued to clash outside the CNN Center, another group blocked I-75/85 on the Downtown Connector at about 8 p.m.

In an interview at roughly 8:10 p.m., Andrew Young told 11Alive the protest had "disintegrated into foolishness."

Around that same time, a car was set on fire outside the CNN Center.

By 8:30 p.m., more windows were being broken at restaurants and businesses around the CNN Center.

At roughly 9 p.m., as darkness fell and the situation grew more out of hand, the emerging chaos centered on the area outside the CNN Center. At around that time, more windows were broken at its entrance.

CNN staffers reported rocks were being thrown into the building at officers who were lining the lobby.

At 9:26 p.m., live on CNN, a protester threw a firework into the building, which then went off in the midst of the officers.

At 9:30 p.m., the police began firing tear gas into the crowd in an effort to finally break up the scene at the CNN Center.

Just before 10 p.m., Mayor Bottoms, Chief Shields and the rappers Killer Mike and T.I. made a public plea for peace, in an emotional and impassioned news conference.

“What I see happening on the streets of Atlanta, is not Atlanta. This is not a protest. This is not in the spirit of Martin Luther King, Jr. This is chaos," Bottoms said. "A protest has purpose. When Doctor King was assassinated, we didn’t do this to our city.”

"If you care about this city, then go home," the mayor added.

“This city don’t deserve this," T.I. said. "However, I understand that a lot of others do. But, we can’t do this here. This is Wakanda. This is sacred, it’s supposed to be protected.”

Sometime around 10:30 p.m., protesters broke into and looted the gift shop of the College Football Hall of Fame.

At that same time, Sgt. Cortez Stafford with the Atlanta Fire and Rescue said they had responded to several burning vehicles throughout the night. Photos from the scene showed a number of police and fire vehicles damaged, and a number of protesters were arrested.

After 11 p.m., reports began to trickle in of the rioting breaking out in the Buckhead area, specifically at the Lenox Square and Phipps Plaza.

At 11:20 p.m., we reported, "Police say they are responding to reports of protests at Lenox Square mall."

By midnight, a large police presence could be seen at Lenox.

Saturday, morning: At about 12:10 a.m., Gov. Kemp tweeted he was issuing a state of emergency for Fulton County and activating 500 Georgia National Guard troops to "protect people and property in the Atlanta."

"We will continue to make all state resources available to local leaders during this emergency situation," Kemp said.

At 12:30 a.m., Atlanta Police confirmed looting had taken place in the area of Lenox Square, while Atlanta Fire had put out a fire at Del Frisco’s Restaurant.

Sometime overnight, the Target in the area was also looted and vandalized.

At 1:20 a.m., Atlanta Police said there had been "multiple instances of shots being fired by people in these groups of protesters" in the area of Phipps Plaza.

Police said they had found one man who was shot, and transported him to Grady Hospital in stable condition.

In many ways, a symbolic end to what he termed a "sad night in Atlanta."