Victory at Stanislaus State smelled like rotten cabbage on Tuesday. A rare corpse lily bloom, one of possibly 10 in the country, happened in Turlock. 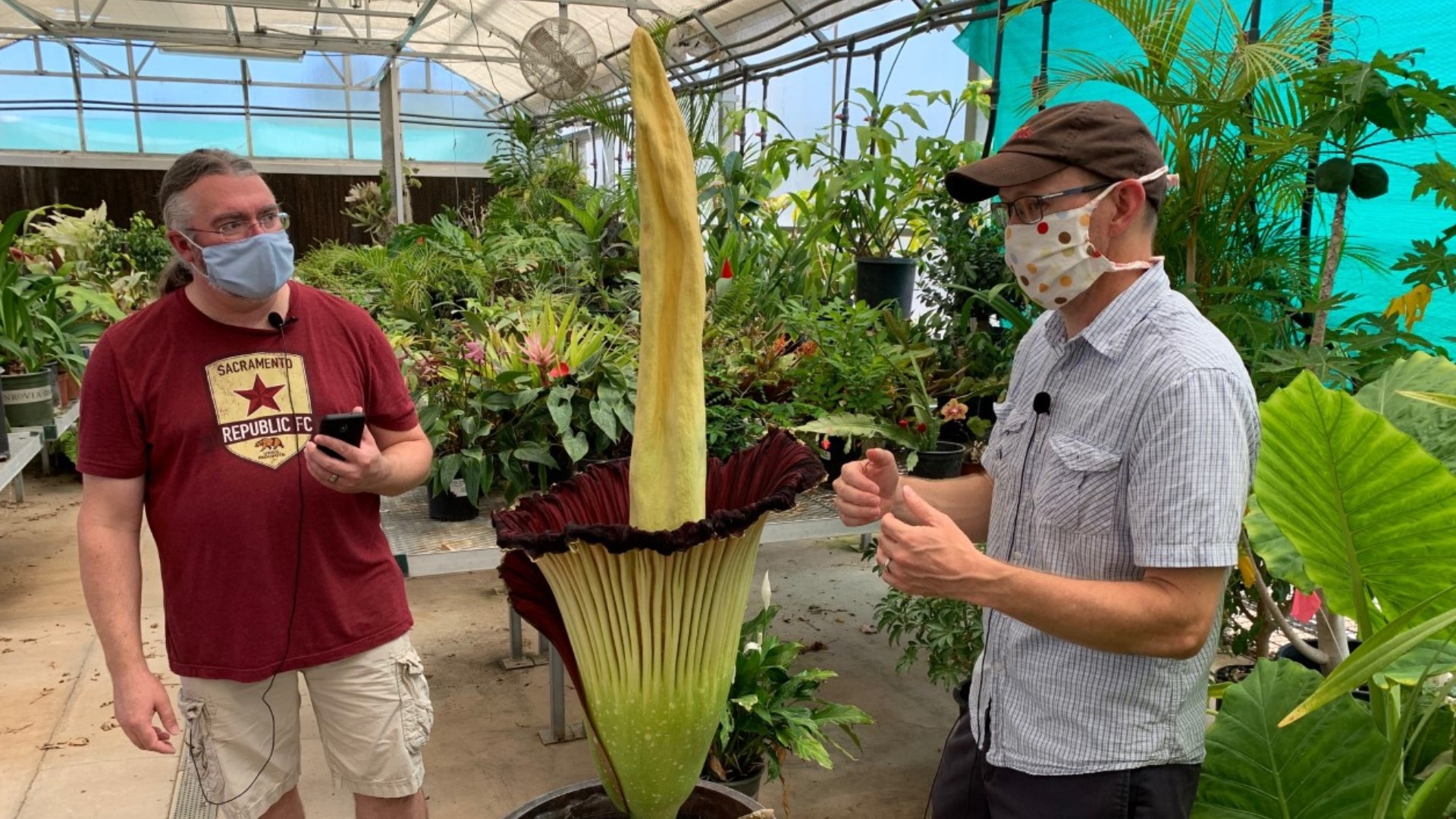 TURLOCK, Calif. — After nearly 10 years, the Stanislaus State University greenhouse finally smells of rotting vegetables, and, for biology professors on Tuesday, that was the smell of victory.

A near decade of work went into caring for and raising Stanislaus State's corpse lily, a flower best known for the horrendous odor it spreads when it blooms.

“Me, personally, this is the first one of these I’ve ever seen in bloom in my life," said Michael Fleming, Associate Professor of Biology. "It took me almost 50 years to get to enjoy this.”

The lily in bloom is a rare sight. Fleming says there's likely only eight to 10 blooms in the United States in a given year at university greenhouses or private collections.

Now, standing nearly five feet tall, the corpse lily grew a large "flower spike" called a spadix in the center in the course of two weeks. The plant's leaves wrapped themselves up snugly against the spadix until Monday night when it started blooming. Conveniently, the flower spread its "perfume" overnight.

“The smell is something like rotten cabbage [or] rotten Kimchi," said Fleming. "It does smell like something is definitely rotten and dead.”

“My poor wife, she couldn’t even bring herself to come in here for more than about 10 seconds, so she got a quick look and [went] right back out the door,” said Fleming.

By contrast, the flies love it.

“If this were in its native environment, those insects would be all over this thing,” Fleming said.

“The scent that’s coming out of this thing, what’s going to be attracted to it in terms of insects, are going to be flies or beetles that are going to come to scavenge or lay eggs in a rotting body in the forest,” he added.

Dr. Stuart Wooley, curator for the greenhouse, brought the plant to Stan State from the University of Washington. However, it's not the kind of thing he or anybody else in Turlock would be able to just plant and grow in their backyard.

The university's greenhouse was critical. Most people would find a plant like this in a rain forest environment, likely in Sumatra or Indonesia. It wouldn't exactly be friendly with the dry summers and wintry frosts in Turlock

Today's the day! The corpse lily in the Stan State greenhouse is in bloom today, a once-in-a-decade event! Join faculty from the Department of Biological Sciences to learn more about this rare bloom.

Following years of work, people can finally take a moment to appreciate the rare bloom, albeit virtually. It's a triumph for the professors, but it's also not without some disappointment. Given current circumstances, they can't share the moment with their students or many others.

Most of the Stan State campus has been closed due to the coronavirus pandemic.

"We’re proud of it. It’s a little bit bittersweet again because we can’t let the public be tactile with it and sort of experience it first hand,” Fleming said.

Meanwhile, they'll be experiencing the flower fumes on behalf of the public for the next couple days and share their accomplishment virtually.

"To get a bloom is pretty rare and I guess… you might get eight or 10 blooms in America and this is ours here,” Flemings said.