What exactly does fire containment mean?

In a state like California, which is prone to wildfires, the terms "containment" and "controlled" are used to describe the status of fires, but what exactly does that mean? 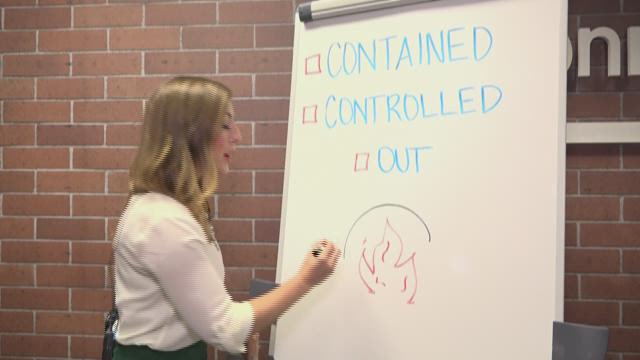 When wildfires break out, fire officials will often provide updates on fire containment in percentages.

In a state like California, which is prone to wildfires, residents commonly hear the terms "containment" and "controlled" when fire officials update the status of fires.

But what exactly does that mean?

The National Wildfire Coordinating Group (NWCG) defines containment as "the status of a wildfire suppression action signifying that a control line has been completed around the fire, and any associated spot fires, which can reasonably be expected to stop the fire's spread."

Firefighters will use a natural barrier by digging a line in soil around the circumference of a fire to help stop the spread of a blaze. Water or fire retardant can be dropped into line to help with the efforts. The percentage measurement numbers refer to how much of a fire's perimeter is surrounded by a fire line. For example, if three miles of fire line has been constructed around a wildfire that 10 miles in circumference then the fire is 30 percent contained.

However, containment isn't always a guarantee the wildfire won't continue to spread. Winds can always kick up the speed of a wildfire and firefighters may not be able to keep up with building the fire line.

When a wildfire is "controlled", it refers to the "completion of control line around a fire, any spot fires therefrom, and any interior islands to be saved; burned out any unburned area adjacent to the fire side of the control lines; and cool down all hotspots that are immediate threats to the control line, until the lines can reasonably be expected to hold under the foreseeable conditions" , according to the NWCG.

At this point firefighters are battling the fire from within the fire line. Controlled fires hold no threat of expanding past the fire line. A fire is not considered out until all of the flames and hot spots have stopped burning for about 48 hours.