The North Valley Animal Disaster Group is starting the process of searching for lost pets or farm animals that got left behind during fire evacuations. 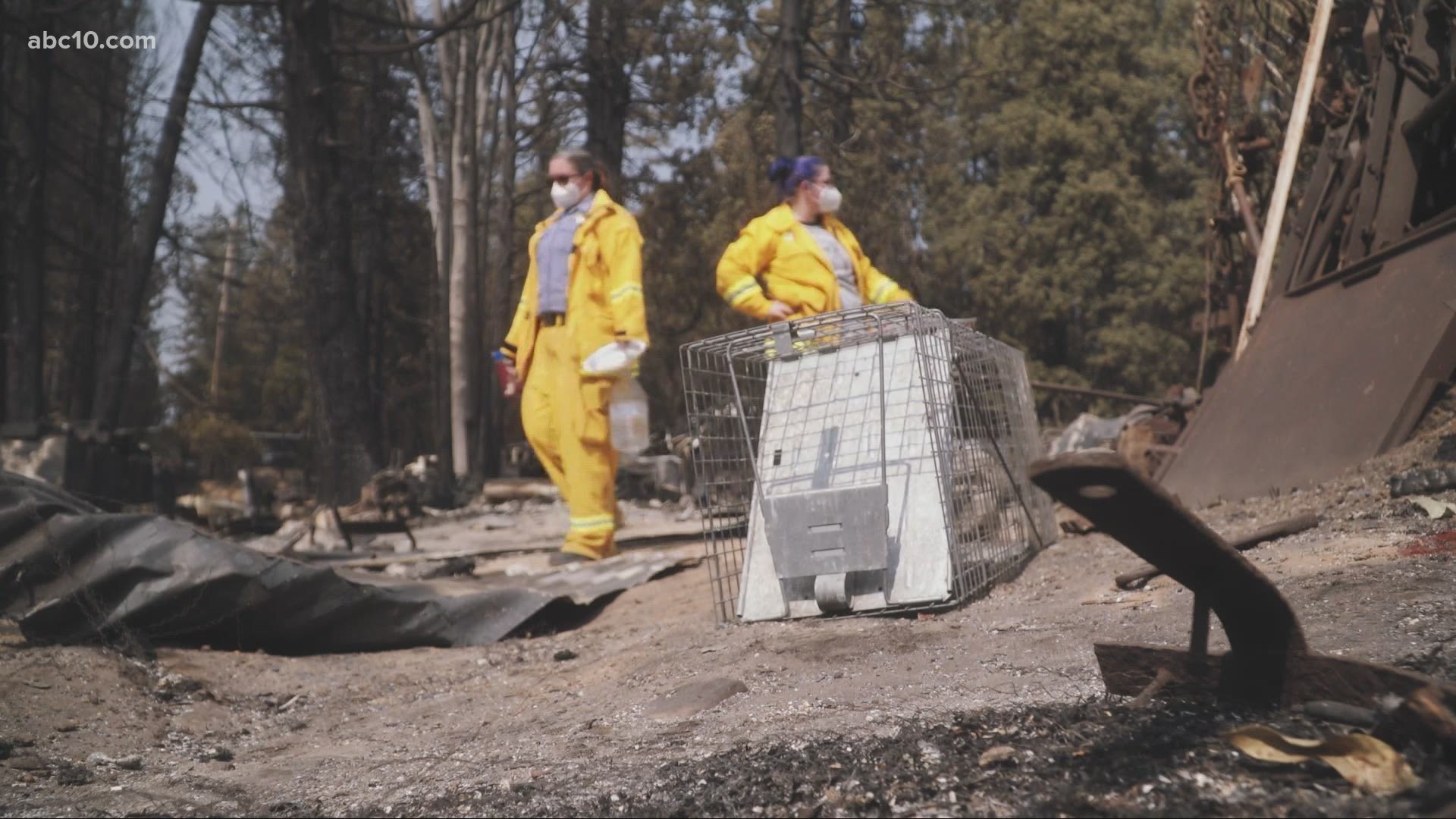 BERRY CREEK, Calif. — Days after the flames tore through Berry Creek, a group some might call heroes are on a search and rescue mission of their own.

Roaming the burn area at the North Complex Fire, they are searching for the animals and pets that got left behind.

“It’s not uncommon so it’s very likely that an animal could have taken shelter,” said Hannah Booth, an animal services technician for Chico Animal Services. “Animals are survivalists, instinctually, so if there’s any way for them to survive, they’re going to find it."

RESCUING ANIMALS LEFT BEHIND: After seeing chickens, dogs and cats left behind in the #NorthComplexFire burn area, I...

Her team gets calls about the animals left behind or from crews working in the area. She says they’ll rescue the ones they can find.

“At the very least we’ll set out some food and water if there is a cat roaming around here, so we can keep making sure they’re taking care of,” she said.

And her team feeds the animals they can’t find.

“And then if an owner were to come back to this area, this will be there as well so they can kind of see what kind of care their animals have gotten while they were gone,” she said.

On Monday, Booth had the job of checking on a group of goats and chickens that she expected to feed and rescue. But when she got there she unfortunately found the worst case scenario.

“It’s just really unfortunate but it does happen,” she said. “It’s devastating, it really is, but the good will always outweigh the bad.”

SUNSET OVER THE BURN AREA: Today is the first day it’s been clear enough for us to see the water in Lake Oroville since...

Then, finally, they found a sign of life at their final stop of the day. A cat reported missing popped out from underneath a burned-out trailer.

“Oh my god I could cry, I mean it’s just really awesome, myself, my parents went through the Camp Fire and they had to leave a cat behind and it did end up making it which was amazing and it kind of just is almost a repeated feeling,” she said.

The cat was still a bit too skittish to jump into Booth’s arms, but she set a trap with food and is hopeful the little guy can be returned back to its owner, just like his two siblings were last week.

“Even just this small thing of seeing a cat at somebody’s house, even if we can’t catch it, it’s really amazing and that’s why we're out here," she said.

Most of the animals found are being taken to a small animal evacuation center in Oroville where crews are already starting the process of reuniting them with their owners.

If you’d like to help, you can provide monetary donations to the North Valley Animal Disaster Group, overseeing animal rescues for this incident, by visiting their website.

WATCH ALSO: Smoke fatigue setting in? Here's what you should and shouldn't do outdoors