Attorneys: We plan on proving PG&E caused the Tubbs Fire 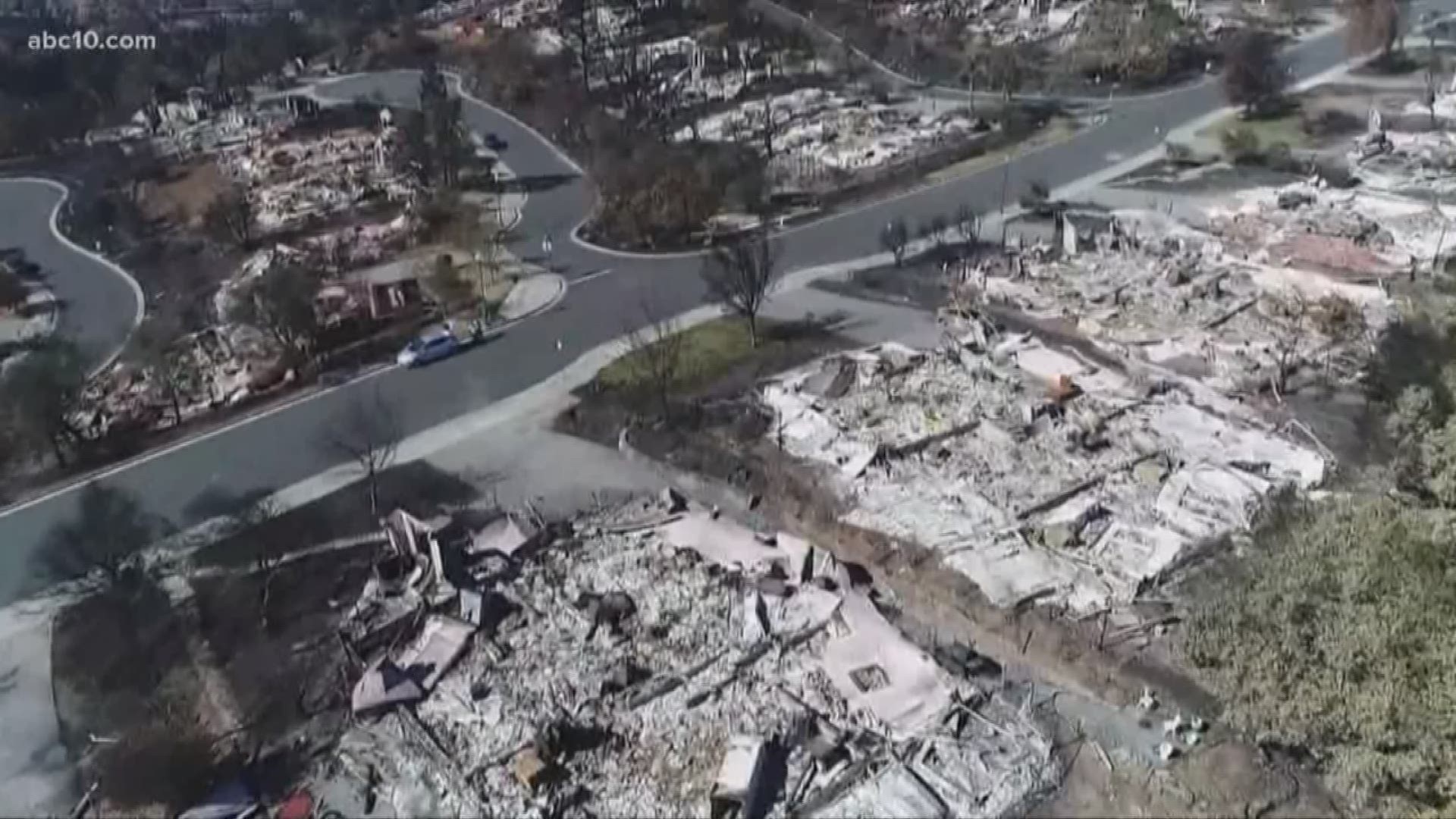 CALISTOGA, Calif. — Attorneys for wildfire victims are offering a glimpse into the case they plan to make in court, as they argue that PG&E caused the deadly and destructive Tubbs Fire.

Ignited on the night of Oct. 8, 2017, the Tubbs Fire killed 22 people and destroyed more than 5,600 structures in Sonoma and Napa counties. This is the fire that devoured entire neighborhoods in Santa Rosa.

In its January 2019 investigation report of the disaster, Cal Fire traces the Tubbs Fire's point of origin back to private electrical equipment on private property, at 1128 Bennett Lane in Napa County's Calistoga community.

However, the lead investigator on the case, Cal Fire's San Mateo-Santa Cruz Unit Battalion Chief John Martinez, admits in the report that exact evidence of the cause was never found.

"The privately-owned electrical hardware was destroyed during the fire and no evidence of an electrical event was observed," he said, adding, however, that other clues on the property indicate there was "an electrical-caused fire originating from an unknown event affecting privately owned conductor or equipment."

Michael Kelly, an attorney for Tubbs Fire victims, put a finer point on it.

"Cal Fire did not find, actually, a component, a wire, a pole— did not find any physical evidence consistent with its suggestion that the fire started there," he said.

Nearly two years after the Tubbs Fire wreaked havoc on the North Bay, thousands of victims are still waiting to see if PG&E will be on the hook for damages.

"Many of these folks are older," Kelly said. "They're not about to roll out and get a huge bank loan. They need resolution of this case in order to get their lives back together."

He and other attorneys will try to convince a jury that PG&E caused the Tubbs Fire.

Their case includes two photos of damaged copper wires— evidence, victims' attorneys say, of a spark on a power line conductor located near - but not on - the private property.

Security video from the nearby Bennett Lane Winery shows the spark, with a timestamp of 9:20 p.m. Attorneys say the spark would have cut off power to the nearby private property blamed by Cal Fire. If there was no electricity going to the private property, they say, there's no way private equipment there could've sparked and started a fire.

“We’re going to be able to establish that arcing, I believe, was the cause of the fire," said attorney Steve Campora, who represents Tubbs Fire victims. “When a branch comes across both lines, it closes that circuit, so you have 12,000 volts that’s basically escaping, coming out of the system, and it causes, essentially, a lightning flash.”

While Cal Fire's investigation report makes note of the Bennett Lane Winery security video, it does not mention the two lines with evidence of arcing.

Attorneys also plan on using the wind direction in making their case.

Cal Fire says strong winds were blowing toward the south and west that night. Looking at the burn area of the Tubbs Fire, an origin point on that hillside private property at 1128 Bennett Lane means some of that fire would have had to spread against the wind.

"Fires do not go downhill into a wind," Kelly said. "Cal Fire basically suggested that from an unknown source in an unknown place, with an unknown component, they say that the fire started on private property and then burned downhill into the face of 70 mph winds."

PG&E is not disputing that its equipment caused many of the 2017 and 2018 wildfires, but it stands by Cal Fire’s Tubbs Fire investigation, released on January 2019, which says that private equipment on the private property started the Tubbs Fire.

"CAL FIRE has completed its investigation of the 2017 Tubbs Fire and concluded that PG&E facilities did not cause the fire," a PG&E spokesperson said, in response to ABC10's request for comment on this story. "Without question, the loss of life, homes and businesses during these devastating wildfires is heartbreaking, and we remain focused on helping affected communities recover and rebuild."

"The safety of our customers and the communities we serve is our most important responsibility," PG&E continued, "and we are committed to assessing our infrastructure to further enhance safety and help protect all of the customers we serve from the ever-increasing threat of wildfires."

RELATED: What one wildfire did to a California town’s schools in four years

When PG&E declared bankruptcy in January 2019, it froze all pending litigation against the company. A federal bankruptcy judge decided in August that a small number of Tubbs Fire victims could "unfreeze" their lawsuit and move forward with challenging the cause of the Tubbs Fire.

Because it was the most deadly and destructive of the 2017 North Bay fires, determining whether PG&E caused the Tubbs Fire has big implications for the amount of money the utility may owe victims. That’s why the bankruptcy judge said he OK’d the lawsuit.

PG&E needs an approved plan to exit bankruptcy by June 30, 2020, otherwise, it can’t access a newly created state wildfire liability fund—a pool of money to help utilities pay the claims of victims of future wildfires caused by their equipment.