With a backlog of thousands of dollars of Lego from his popular social media channels, Earle decided to go out and give them to any kids impacted by the Caldor Fire. 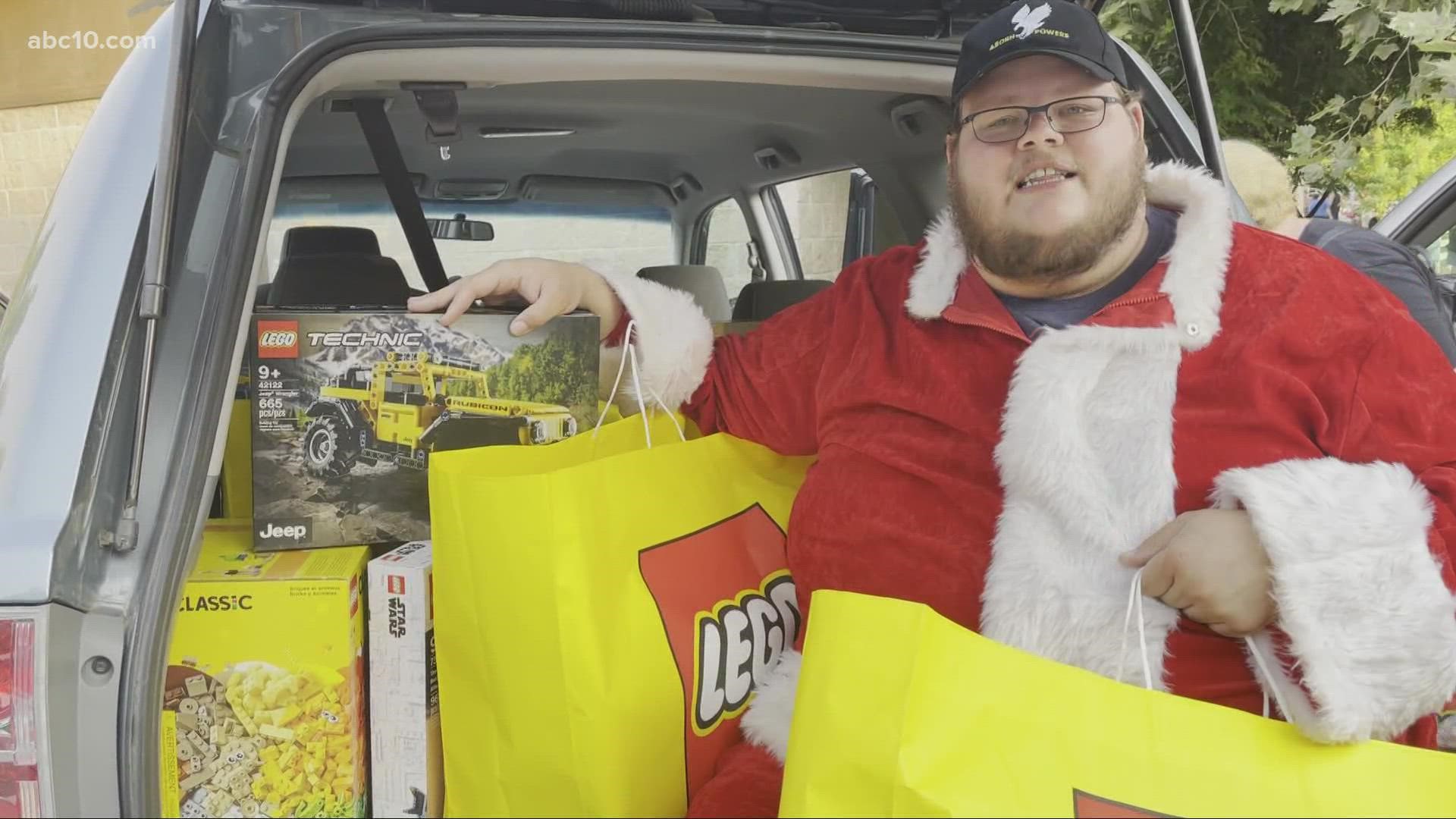 PLACERVILLE, Calif — As thousands have been evacuated due to the Caldor Fire, many with no home or belongings to return to, a man with a jolly attitude and a red suit to match is shining some light in the darkness.

Meet Morgen Earle. With nearly 4,000 YouTube followers on his "Earle Fam Builds" channel, he's become known on social media for his intricate Lego builds and creations. It all started as something to help him cope with the difficulties the pandemic brought.

"I got into Lego during the pandemic because I was grappling with pretty bad anxiety and depression," Earle said. "There's something incredible about this type of toy specifically... because it is 100% imagination and boundless while also being 100% structured and logical. It helps you take yourself away from that dark place."

Now he's helping take others away from the dark places the Caldor Fire has created, and with a new nickname: The Caldor Fire Santa.

"Somebody called me it during the first what we call smile runs, a lady said, 'You're the Caldor Fire Santa' and I was just like, 'Oh my gosh, I'm a heavy set guy with a beard and glasses. I can do this! I can make this work'," Earle said.

Earle's father is a fire chief working on the pioneer side of the Caldor Fire. When his father told Earle on the second day of the fire that around 30,000 people were evacuated and "a whole group of them are kids that brought nothing," Earle and his wife came up with a game plan.

With a backlog of thousands of dollars of Legos from his popular social media channels, Earle and his wife decided to go out and give them to any kids impacted by the fire that they could find. They were shocked by the reception of the community.

"Before we knew it, people were sending us money to go get more and bring them to the other evacuation camps," Earle said.

On Thursday, Aug. 27, Earle attended a BBQ held in Lions Park in Placerville for Grizzly Flats locals, one of the hardest hit communities of the Caldor Fire. The event marked Earle's fourth "smile run" as well as about $8,000 worth of Legos they've given out.

With his uplifting attitude, Santa suit and bag filled with Legos, it's easy to see why he quickly became the most popular person at the picnic.

Some light in the dark: Meet #CaldorFire Santa aka @earlefambuilds — he’s giving #Legos out at a BBQ we were invited to for #GrizzlyFlats locals. Many of these kiddos have lost their homes + toys. He’s given around $8K in @LEGO_Group after donations piled in for his effort pic.twitter.com/c4AIUV67rU

"They're reaction is incredible. It's amazing. Their faces light up. You can tell for a second they don't even remember what's going on," Earle said. "There's something poetic about giving these kids something to build and rebuild in the shadow of this destruction and chaos they're experiencing."

While Earle hopes it spreads cheer and hope to communities who need it most, he also hopes it inspires others.

"My message is this: Every single one of us has the power to make a positive impact in our communities. Every single one of us. For me, I just happen to look around and I had Lego," Earle said. "For others, it could be water or prayer or hugs... whatever it is, you have the power to positively impact the people around you and I encourage you and hope this inspires you to take up that mantel."

Earle said for those who want to find and support the next toy drive or the next smile run, visit EarleFam.com.