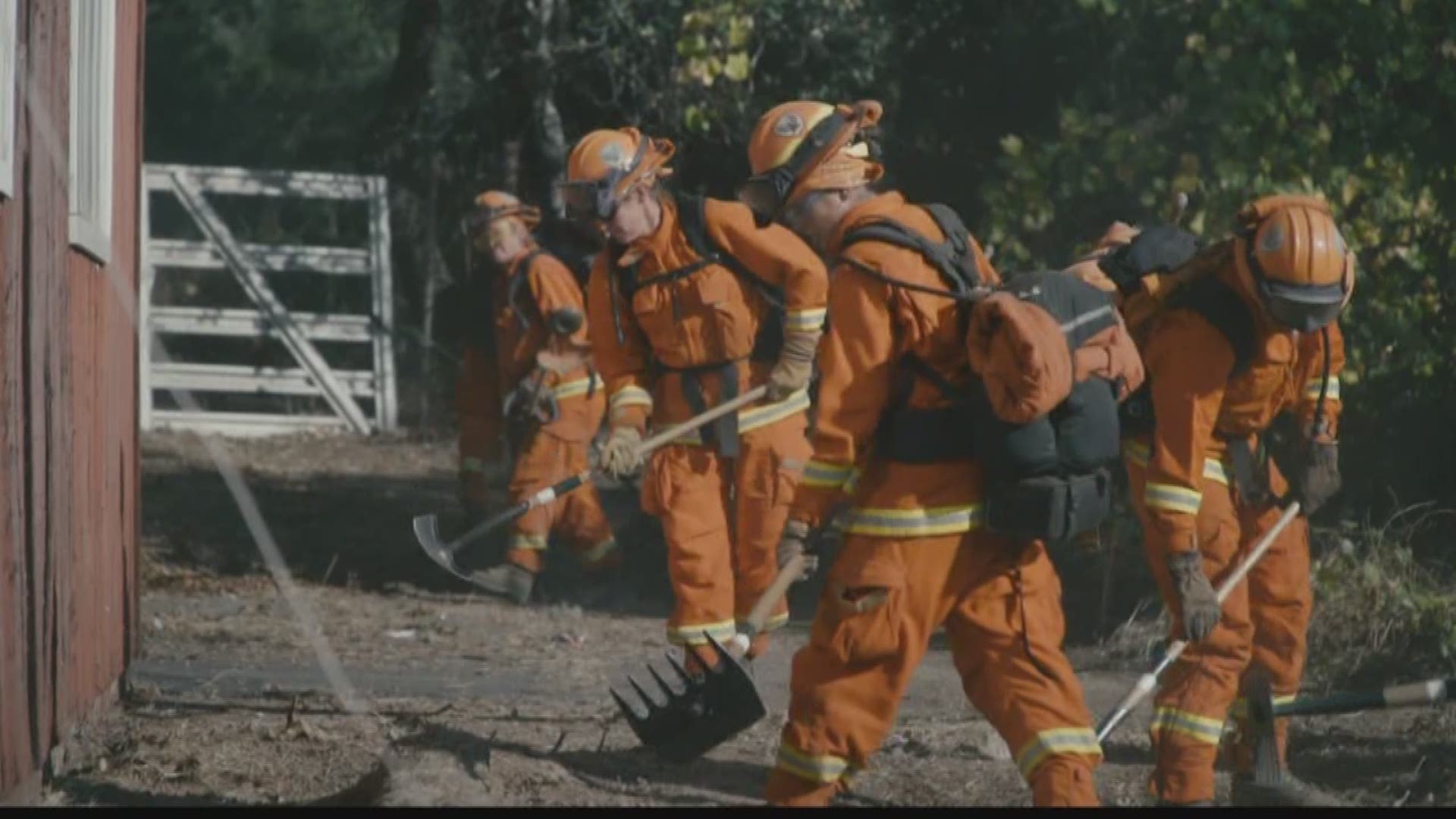 CALIFORNIA, USA — Inmate firefighters have been helping beat back the flames of California wildfires since World War II.

Becoming an inmate firefighter isn’t something that just any inmate can do. It’s a role they must volunteer for and earn. These crews are trained as wildland firefighters and receive the same entry-level training as seasonal Cal Fire firefighters.

In 2018, a new program was started to help former inmate firefighters released on parole land jobs in the profession.

RELATED: California is using inmates to fight wildfires across the state

The concept of inmate firefighters goes back to World War II, according to the California Department of Corrections and Rehabilitation (CDCR). With the work force for Cal Fire depleted due to the war, CDCR provided a different workforce. Inmates occupied temporary camps to increase the amount of firefighters.

Cal Fire has the authority to operate 43 conservation camps in cooperation with with CDCR and the Los Angeles County Fire Department. The crews can respond to incidents like wildfires, floods, and search and rescue.

The actual conservation camp program itself dates back to 1915, a time when CDCR road camps were established. At that time, the camps were meant to provide able-bodied inmates a chance to work on projects throughout the state.

There are 43 conservation camps for adult offenders in 27 counties throughout California.

There are around 3,100 inmates working at the conservation camps, with about 2,150 who are fire line-qualified.

For an average year, the CDCR claims the program provides about 3 million hours of response to fires and other emergencies, and 7 million hours in community service projects. Their services saves California taxpayers about $100 million.

The responsibilities of those in the camps can range from clearing firebreaks, restoring historical structures, maintaining parks, sand bagging and flood protection, reforestation and clearing fallen trees and debris.

4. Inmates must earn the right to work in these camps

Inmate firefighters must have non-violent behavior and conformance to rules while they are in prison.

Inmates who volunteer must be cleared as "physically fit" for the job and have "minimum custody" status. They are screened on a case-by-case basis. Only inmates with sustained good behavior in prison, conformance to rules, and participation in rehabilitative programming can pass.

5. Certain crimes make you ineligible for the program

Any inmate can apply to the program but not every inmate qualifies for the program.

"Some convictions automatically make an inmate ineligible for conservation camp assignment, even if they have minimum-custody status," said CDCR spokesperson Alexandra Powell. "Disqualifying offenses include sexual offenses, arson and a history of escape."

Inmates who volunteer must also have five years or less remaining on their sentence to be considered.

The inmates considered for fire crew positions are evaluated for physical fitness by CDCR and trained in firefighting techniques by Cal Fire. The training includes a week of classroom instruction and a second week of field exercises.

They cover wildland fire safety, attack, hand tool use, teamwork and crew expectations. Once on a fire crew, they have a minimum of four hours-per-week in advanced training.

Credit: AP/AP Photo/Rich Pedroncelli
Inmates from the Eel River Conservation camp hike towards the Robbers fire near Iowa Hill, Calif., Thursday, July 12, 2012. The fire that broke out Wednesday afternoon has consumed more than 500 acres and forced the evacuation of about 40 people. No homes have been destroyed as more than 300 firefighters aided by air tankers and helicopters battle the flames. (AP Photo/Rich Pedroncelli)

7. Inmate firefighters can still be employed by Cal Fire

In 2018, CDCR, Cal Fire and the California Conservation Corps worked together to start a Firefighter Training and Certification Program in Ventura County. The program gives advanced firefighter training to former offenders on parole who were inmate firefighters.

The first cohort came about in 2018, followed by two others in early 2019. The training has already seen some participants land new jobs.

8. Inmate firefighters get paid for their labor with wages and credits

Depending on their skill level, inmate firefighters can earn between $2.90 and $5.12 per day, according to Powell. That cost is paid by CDCR. However, while fighting fires, inmates earn an additional $1 per hour from Cal Fire, regardless of skill level.

The money earned by inmates at camps can be sent home or saved until they are released to parole.

Inmates can also earn time off their sentence by working in the fire camps. Every one day served can get them two days off their prison sentence. Even offenders in the fire camps that are not firefighters can earn one day of credit for every day of incarceration for good behavior.

When a wildfire emergency occurs, at least one or two crews are sent on the initial dispatch with engines and aircraft. More crews can be deployed at the request of the incident commander.

During the wildfire, the crews are based in command centers with Cal Fire for 24-hour shifts. After that shift, the crews return to get a chance to rest while other crews take their place for 24 hours.