A wildfire in California killed a mother and daughter. Is PG&E to blame, again?

Eight-year-old Feyla McLeod and her mother Alaina died in the Zogg Fire. With PG&E under a homicide investigation and suspected of sparking the fire, the family want 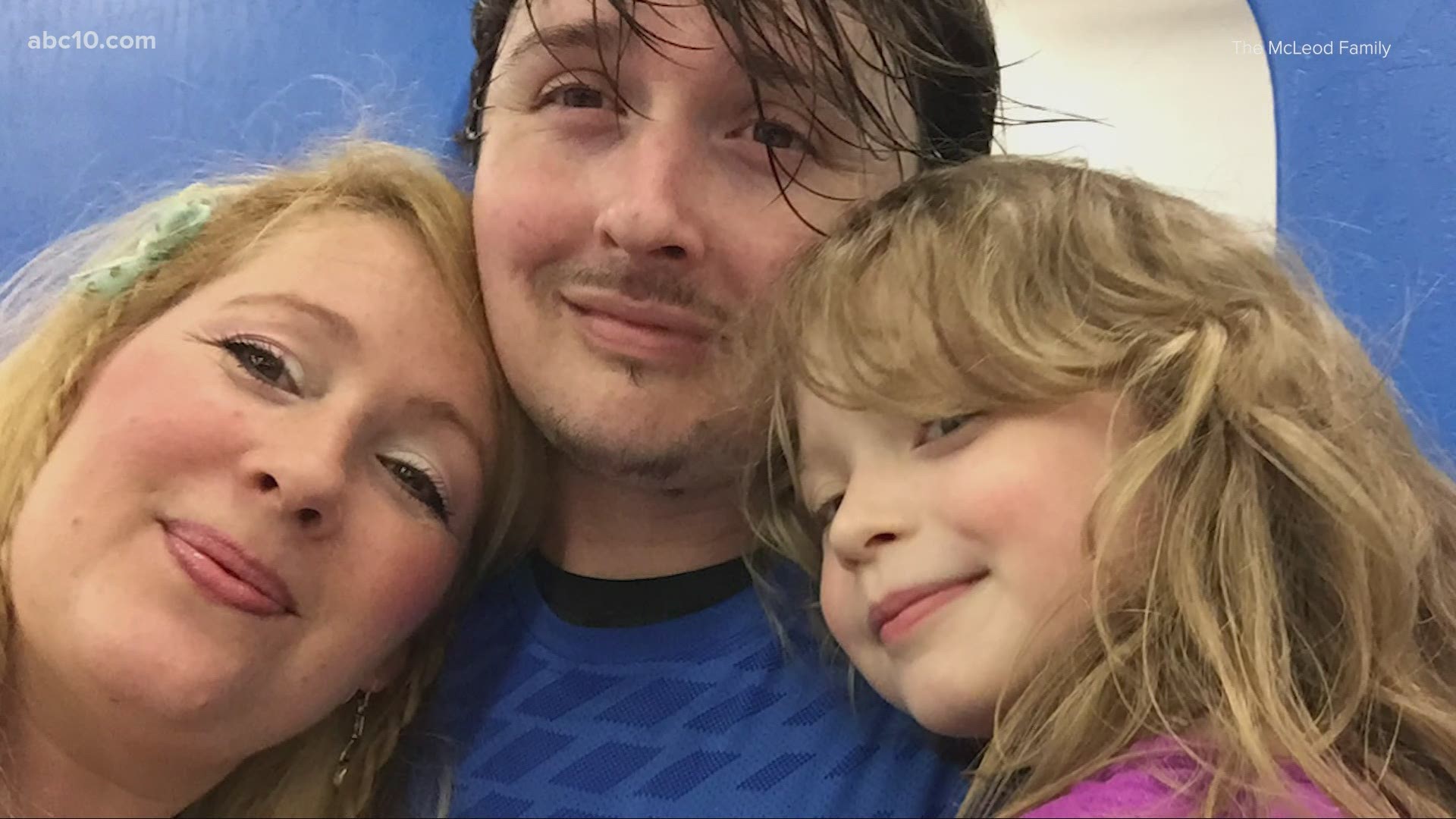 IGO, Calif. — When he got off work that afternoon, Zach McLeod’s wife and daughter were still alive.

Zach, 31, spoke on the phone with his wife Alaina, 46, to talk about what groceries he should pick up on his way home.

By the time he got to the store, he could see the smoke from the Zogg Fire.

Zach couldn’t get a call through to Alaina or their eight-year-old daughter Feyla.

He wanted to make sure they were safe, but they weren’t. They were running for their lives.

Feyla and Alaina made it out of their Igo home before the flames destroyed it, but they had to escape by driving down a steep dirt road in the middle of a wind-driven firestorm.

Less than halfway to the bottom, their pickup truck ran off Archer Road and got stuck on the burning hill.

There was nowhere left to run.

“It's not an easy road to drive in the best conditions,” Zach McLeod told us. “She did her very best and I am proud of her.”

Flames overran the truck with Feyla and Alaina inside. They didn’t survive.

“Put yourself in my daughter's shoes. How scared she would be,” Zach McLeod said. “Flames all around you. Wind and smoke. She's just a little girl. She's 8 years old.”

Zach is simultaneously crushed and determined: He lost his wife, his daughter, their pets, their home, and nearly all of their possessions that afternoon.

Zach wants people to know how his wife and daughter died. He’s determined to do anything he can to prevent it from happening to anyone else.

“So many families have been hurt,” Zach McLeod said. “Too many lives lost. Too many homes destroyed.”

He spoke to us shortly after learning that wildfire investigators seized parts of a PG&E power line as evidence.

The Zogg Fire is now a homicide investigation. Authorities have only named one suspect: The Pacific Gas and Electric Company.

The loved ones of the dead are trying to come to terms with the idea that the same company recently convicted of America’s largest-ever corporate homicide may have sparked the Zogg Fire as well.

“The investigation isn't over but it has happened in the past,” Zach said. “So many families have been hurt. Too many lives lost. Too many homes destroyed.”

THE SHUTOFF THAT NEVER CAME

The Zogg Fire started during a warm, windy summer afternoon on September 27.

PG&E had warned people in this part of Shasta County to prepare for blackouts for wildfire prevention.

But the circuit under investigation was left on. PG&E reported this timeline of events to regulators and investors:

PG&E declined to answer most of our questions about the Zogg Fire investigation but did share that its nearest weather stations did not record wind speeds fast enough to meet the company’s shutoff criteria.

When asked for the exact location of these stations, PG&E declined to respond.

ABC10 has located that the nearest PG&E weather station in publicly available weather databases. It is located about 3.5 miles away from where the Zogg Fire started and is about 600 feet lower in elevation.

FAMILY’S PLEA TO JUDGE: TAKE OVER THE SHUTOFFS

Zach McLeod knows that a federal judge is watching. That’s because PG&E was already on federal probation for the company’s prior felonies when it sparked the 2018 Camp Fire.

A jury convicted PG&E of six federal felonies, including obstruction of the investigation, after the 2010 San Bruno Gas explosion. Eight people died in that disaster.

This summer, PG&E pleaded guilty as charged to 84 felony counts of involuntary manslaughter and one more felony for illegally sparking the Camp Fire through criminally negligent maintenance of dangerous equipment on its high-voltage power line.

The company has insisted that the problems are not systemic, that it can solve its wildfire problems on its own, and that it can be trusted to shut off circuits that won’t safely survive windstorms.

Federal judge William Alsup has spot-checked PG&E’s safety work and found it to be “crappy.”

Alsup was very clear about this, going so far as to spell it on the record: “C-R-A-P-P-Y.”

PG&E had previously convinced the judge not to implement a strict inspection-and-certification plan that would have forced PG&E to shut down uncertified power lines on windy days.

Alsup had asked PG&E to reconsider and let him order the blackouts, offering to accept the public outcry when the lights go out.

“I’ll take the heat,” Judge Alsup told PG&E’s lawyers. “You can blame me.”

Judge is holding off on rules to force @PGE4Me to shut off power on windy days.
He dangles it to PG&E’s lawyers, saying he’s willing to make it a condition of PG&E’s probation: “I’ll take the heat,” when people complain about shutoffs. “You can blame me.”

“Judge Alsup should take control over it so that the power gets shut off when it needs to get shut off,” Zach McLeod said. “Thank you to the judge for doing his best to try and keep control.”

The vast majority of the political pressure on PG&E has been pushing the company to make the blackouts smaller and less disruptive to everyday life.

Zach would rather see PG&E err on the side of protecting lives and property.

“We know it's annoying when your power is shut off, but trust me. You would much rather have to go a day or two without power than go through what we are going through right now,” McLeod said.

We first learned that PG&E’s power line was suspected because the company announced the news to regulators and investors.

PG&E has a duty under California’s laws and regulations to provide “safe, reliable” service. Specifically, PG&E has sparked wildfires due to safety problems with equipment and vegetation.

The company is supposed to keep trees trimmed back far enough from power lines to avoid contact with the uninsulated wires that carry the electricity.

Judge Alsup and other experts have accused PG&E of repeatedly putting profits over safety and failing to learn from its past disasters.

“A lot of money went out in dividends that should’ve gone to the tree budget. This is a problem of your own making,” Alsup said in 2019.

When Cal Fire’s investigators find evidence that might be able to prove a crime, they turn it over to the local district attorney to decide whether charges should be filed.

Shasta County District Attorney Stephanie Bridgett confirmed that her office opened an active criminal investigation based on the evidence seized from PG&E’s line in the Zogg Fire burn area.

PG&E is once again facing the prospect of defending against homicide charges.

“Certainly homicide is a potential given that four individuals have died,” Bridgett said.

This story is part of ABC10's reporting project FIRE-POWER-MONEY: California's burning crisis and how it's costing us all. Season two will take viewers inside the criminal investigation of the Camp Fire, America's largest-ever corporate homicide conviction. New episodes are scheduled to begin October 29 on ABC10 at 6:30, YouTube, and www.FirePowerMoney.com. Send tips and story ideas to investigative reporter Brandon Rittiman at brittiman@abc10.com