The firefighting agency is now saying the Red Flag Warning could extend into Tuesday as towns like Paradise take head and issue evacuations. 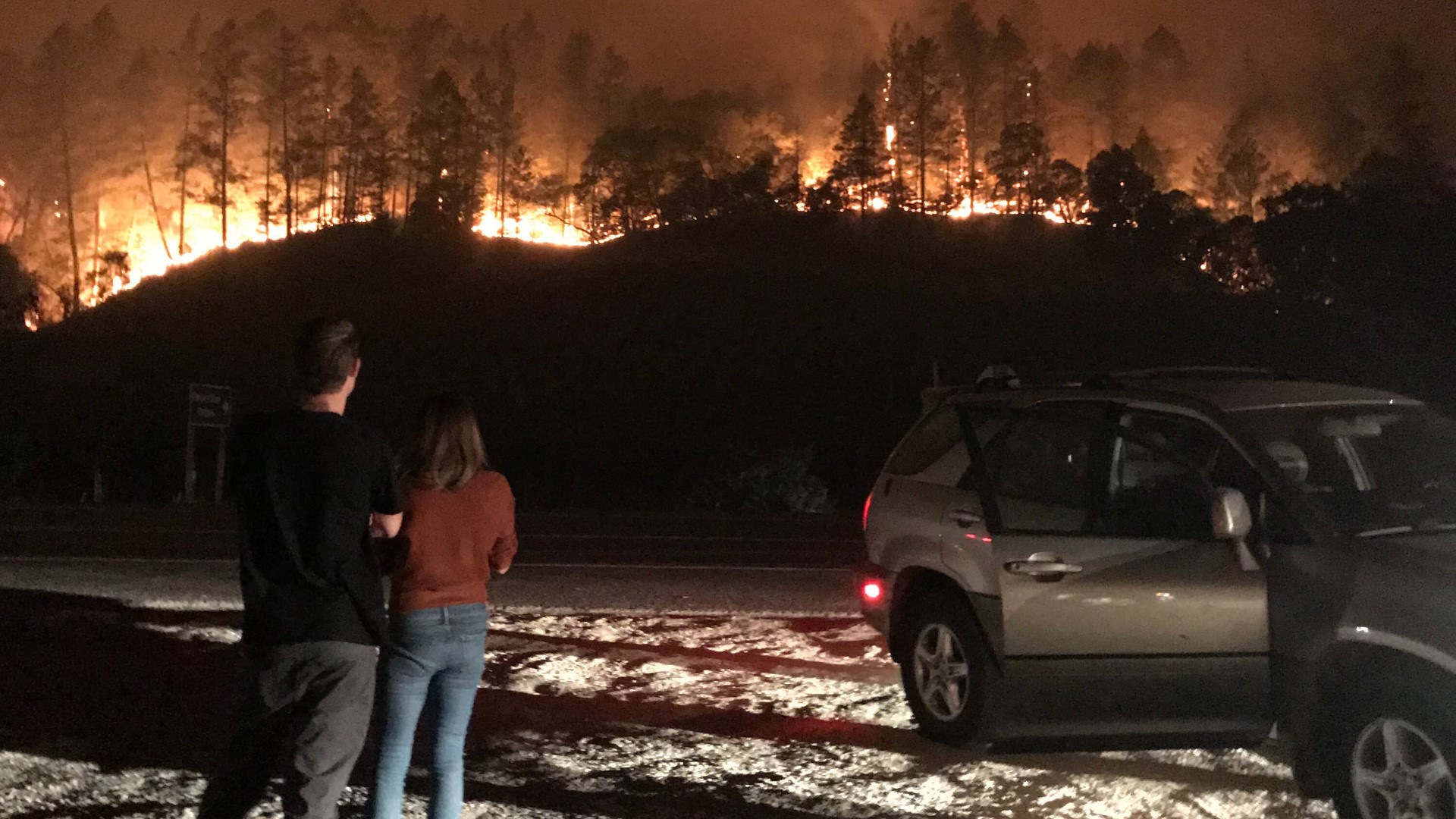 In the West Zone of the North Complex fires, Cal Fire firefighters managed to hold flames in check and neither lost or gained containment on the blaze since their last update.

Evacuation orders remain in place for the areas of Pulga, Concow, Big Bend, and Yankee Hill. The town of Paradise along with Stirling City and Magalia are under evacuation warnings.

A fire that sparked over the weekend in the Grizzly Forebay area in the Plumas National Forest has now become part of the North Complex fires, according to the National Forest Service.

Officials said the fire is about 10 to 12 miles northeast of Paradise.

Due to gusty winds, air resources haven't been able to reach the fire. They're hoping to get a better idea of how big the fire is once the winds die down.

Evacuation orders remain in place for the areas of Pulga, Concow, Big Bend, and Yankee Hill. The town of Paradise along with Stirling City and Magalia are under evacuation warnings.

Paradise and surrounding areas were devastated in the 2018 Camp Fire, known as the deadliest wildfire in state history. For Brian Voight, a long time resident of Paradise, the evacuation warning has brought up a lot of emotions for people in the area.

He said that his girlfriend lost everything in the Camp Fire. Now, he and many others are anxiously waiting for news on evacuations. Nonetheless, he stands ready to leave when needed.

He's packed albums, pictures, his kids' trophies, some shirts, and other belongings that he doesn't want to lose.

“People are ready to leave again, and it’s just because it feels to them like it’s just never ending since the Camp Fire,” Voight said.

Credit: abc10kxtv
Brian Voight packs up his belongings after learning about an evacuation warning for the town of Paradise.

As some new evacuation orders go into effect, others are being lifted or downgraded.

All evacuation orders and warnings in Yuba County have been lifted as it relates to the North Complex West Zone. This includes Forbestown, Clipper Mills, Challenge, Rackerby, Strawberry Valley, Brownsville and Woodleaf. Residents of these areas can now safely return to their homes.

Evacuation orders have reemerged for the North Complex West Zone Fire as a Red Flag Warning remains in effect through Monday, possibly extending in to Tuesday, says Cal Fire.

On Sunday, new evacuation orders were issued. Butte County Sheriff's Office called for immediate evacuation of Pulga, Concow, Big Bend and Yankee Hill. An evacuation warning was issued for the areas of Stirling City, Magalia and Clark Road from the Paradise town limits south to Highway 70. The town of Paradise has issued an evacuation warning as well for the entire town.

Cal Fire says containment lines in the West Zone "have been tested" by the weather over the weekend. Despite strong winds, high temperatures and low humidity, "the fire lines continue to hold." Still, firefighters are mopping up debris in hotspots to prevent any embers flying over the lines, while patrols are being conducted in the fire area.

Chief Lauderdale shows us the status of the #NorthComplexWestZone fire in his daily operations video. pic.twitter.com/Fm7a28nUw6

The North Complex West Zone, previously known as the Bear Fire, entered Butte County on Sept. 8 and since then, has resulted in 2,342 structures destroyed, 113 damaged, two first responder injuries and 15 deaths.

According to Cal Fire, in 2019, California wildfires burned just under 260,000 acres from 7,860 incidents. Over 700 structures were damaged or destroyed and three people were killed. This followed two years of some of the “deadliest and most destructive wildfires” in California history.