PG&E responds to judge’s question about political spending, based on ABC10 investigation

Exclusive ABC10 reporting prompted a federal judge to demand answers from PG&E about its political spending - and on Wednesday, the company responded. 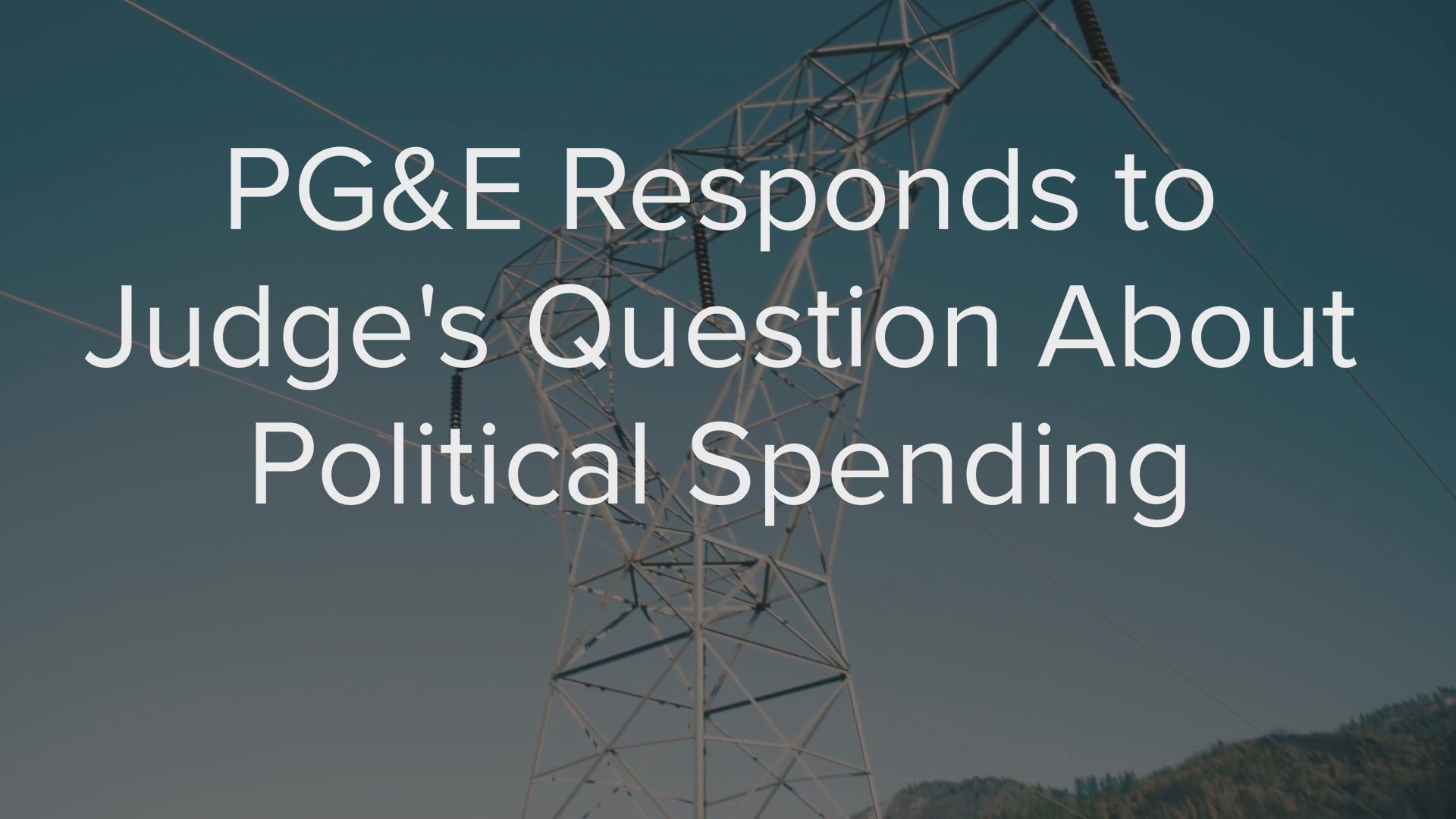 EDITOR’S NOTE: This article is part of the ABC10 Originals project FIRE – POWER – MONEY, a documentary series one year in the making. The series breaks down California’s wildfire crisis into its core elements. In FIRE, you’ll learn why California’s forest fires are deadlier than ever and why power lines are connected to some of the worst fires. In POWER, we show how electric company PG&E influences politics to protect its monopoly, despite being convicted of crimes and being blamed for starting many fires. In MONEY, we break down how much it will cost you, including the high-cost fire damage and the price of potential solutions.

PG&E has responded to a federal judge’s demand for answers about the utility company’s recent political spending.

It was a question PG&E was forced to face based on exclusive ABC10 investigating.

Federal District Judge William Alsup, citing ABC10’s reporting, said PG&E “shall set forth the full amount of campaign contributions…and shall explain why those campaign contributions were more important [than] replacing or repairing the aging transmission lines... and removing or trimming the backlog of hazard trees, and increasing vegetation management.”

In its reply to the Court, PG&E said it paid a total of $5.3 million "to political candidates, political parties, political action committees (PACs), and ballot measure committees" in 2017 and 2018 combined.

The company has not yet made any political contributions in 2019, "though may do so in the coming months,” PG&E said in its response, filed Wednesday. Remember, too, that PG&E filed for bankruptcy in January.

RELATED: PG&E bankruptcy could be costly to wildfire victims

As for why the company prioritized political spending during such a turbulent time filled with potential fire liability, PG&E said:

“PG&E does not believe the contributions described above were more important than utility operations, including equipment maintenance or vegetation management. PG&E’s political engagement policies, programs, and practices are overseen by the boards of directors of both the corporation and the utility.”

The company engages in politics at all levels, the documents say, from local to state and federal government, “to ensure that the concerns of customers, shareholders, and employees are adequately represented before lawmakers and regulators. Policy decisions made by lawmakers and regulators at all levels significantly affect the environment in which PG&E operates, especially because its core utility business is highly regulated.”

While it's not unusual for a big company to donate to political campaigns, it is unusual when that company is in hot water for causing deadly wildfires. PG&E's equipment has been blamed for igniting not only last year's Camp Fire in Butte County that killed 85 people but also the North Bay fires of 2017.

RELATED: Get a claim deadline notice from PG&E? Here's what it means

The political spending matters for several reasons, one of which, as ABC10 has reported, is that PG&E is a convicted felon. In 2016, PG&E was convicted of 6 federal felonies related to the deadly 2010 San Bruno gas explosion, which killed 8 people. A jury found PG&E guilty of 5 counts of willfully breaking federal gas pipeline safety laws & 1 count of obstructing the federal investigation into the disaster.

This means that every PG&E donation accepted by California politicians during the 2018 election cycle amounts to taking money from a convicted criminal.

No, it is not illegal for a felon to make political donations, but PG&E was donating to politicians, many of whom were poised to vote on legislation directly impacting the embattled utility's future. One such major piece of legislation, the ‘Wildfire Fund’ bill AB 1054, was passed and became law earlier this month.

PG&E also submitted a response to a second question the judge asked, requiring them to respond to a Wall Street Journal article from earlier this month, entitled PG&E Knew for Years Its Lines Could Spark Wildfires, and Didn’t Fix Them.

PG&E responded that it "strongly disagrees" with the story, saying the delayed maintenance cited in the Wall Street Journal would not have made a difference in the equipment that caused the deadly Camp Fire.

Judge Alsup will ultimately decide what to do based on PG&E's response. ABC10 will be checking for updates in coming days and weeks.