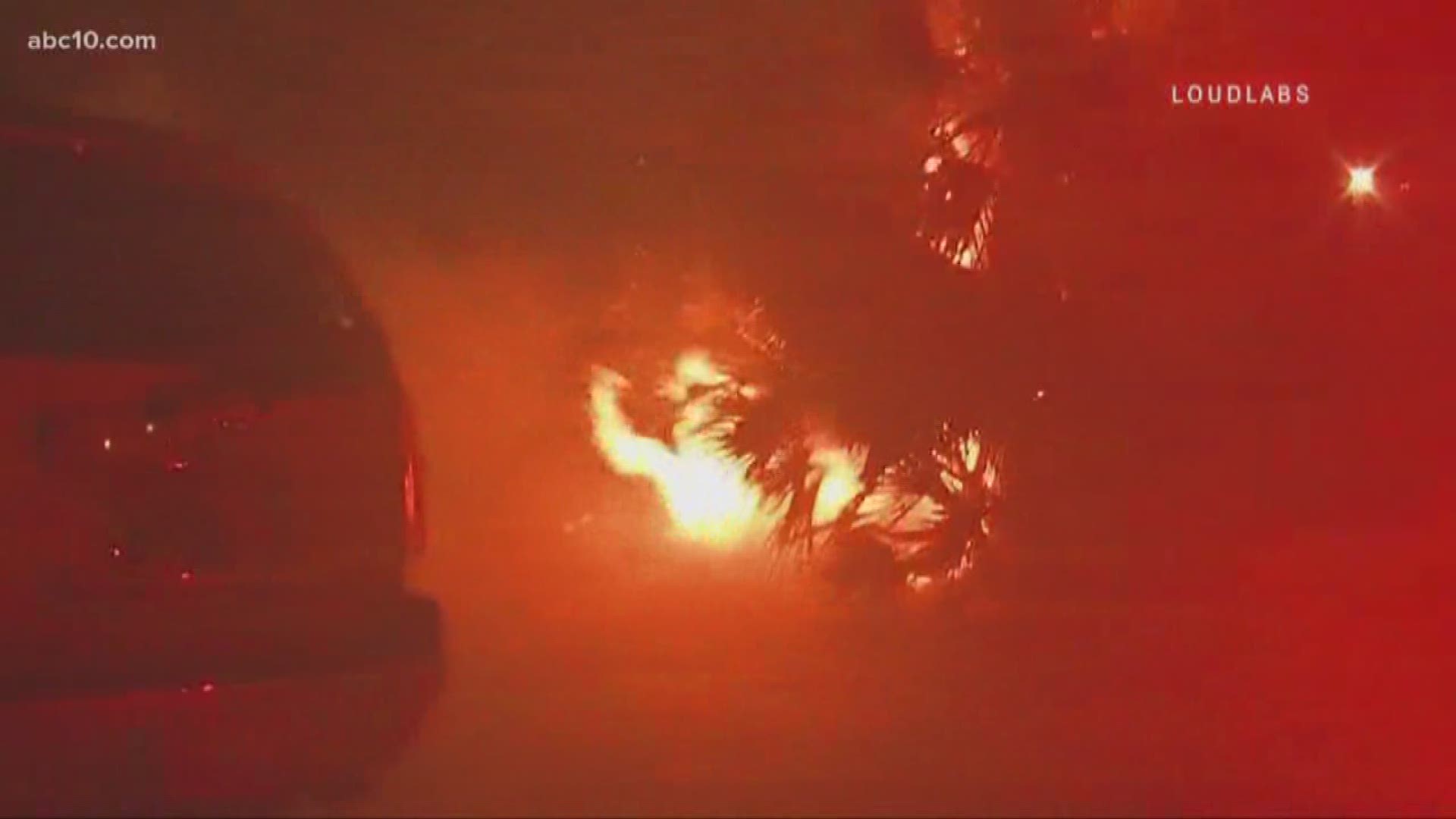 LOS ANGELES — Three people have died at the scene of Southern California wildfires this week, authorities said Saturday, as firefighters aided by diminishing winds beat back a blaze on the edge of Los Angeles that damaged or destroyed more than 30 structures and sent a blanket of smoke across a swath of neighborhoods.

Los Angeles officials said the fire in the city’s San Fernando Valley area hadn’t grown significantly since Friday, and ground crews were tamping down lingering hotspots. Evacuation orders were being gradually lifted in parts of Los Angeles and in Riverside County, where a second blaze was burning. Los Angeles Mayor Eric Garcetti urged residents to be cautious returning home to neighborhoods where fire crews could still be operating.

In Los Angeles, one man who tried to fight the blaze died of a heart attack, and one firefighter reported a minor eye injury.

The fire’s cause is under investigation, and authorities warned that the threat of flare-ups remained.

At the site of the second blaze east of Los Angeles, the Riverside County Sheriff’s Department said a second body was found at a mobile home park where 74 structures were destroyed Thursday in Calimesa. Officials previously reported one death at the community east of Los Angeles.

RELATED: ABC10's Brandon Rittman broke down Califonria's fire crisis to three elements in Fire-Power-Money. Here's why California wildfire's may cost us all.

The department said one of the Calimesa victims has been identified as 89-year-old Lois Arvikson. Her son Don Turner said she had called him to say she was evacuating, but he never heard from her again. Authorities are working to identify the other victim.

Los Angeles Fire Department spokesman Brian Humphrey said the bulk of the fire at the city’s edge had moved away from homes and into rugged hillsides and canyons where firefighters were making steady progress slowing its advance. Television footage showed plumes of smoke rising from the area but no walls of towering flame, as a water-dropping helicopter moved in to dump another cascade on the blaze.

“The bulk of the fire has moved toward wildland,” Humphrey said.

East of Los Angeles, firefighters were also gaining ground on a blaze that ripped through a Riverside County mobile home park, destroying dozens of residences. In Northern California, the lights are back on for virtually all customers who lost power when Pacific Gas &amp; Electric switched it off in an effort to prevent wildfires.

Some 100,000 residents were ordered out of their homes because of the wind-driven wildfire that broke out Thursday evening in the San Fernando Valley, though authorities began lifting evacuation orders in many areas Saturday. It spread westward through tinder-dry brush in hilly subdivisions on the outskirts of the nation’s second-largest city.

Interstate 5, the main north-to-south corridor in the state, was shut down for much of the day Friday, choking traffic until finally reopening.

The smoky scent spreading through much of Los Angeles was a reminder of the threat of a fire season just beginning.

The region has been on high alert as notoriously powerful Santa Ana winds brought dry desert air to a desiccated landscape that only needed a spark to erupt. Fire officials have warned that they expect more intense and devastating California wildfires due, in part, to climate change.

Fire danger remained high for much of Southern California, with warnings in place for large swaths of Ventura and Santa Barbara counties west of Los Angeles.

The cause of the Los Angeles blaze wasn’t immediately known, though arson investigators said a witness reported seeing sparks or flames coming from a power line near where the fire is believed to have started, said Peter Sanders, a spokesman for the Los Angeles Fire Department.

Jonathan Stahl was driving home to Valencia when he saw the smoke and immediately diverted to a mobile home park in Sylmar where his grandmother and aunt live together.

The park had been nearly wiped out in 2008 when one of the city’s most destructive fires leveled 500 homes.

Stahl helped his grandmother, Beverly Stahl, 91, who was in her pajamas, and his aunt to pack clothing, medication and take their two dogs. They saw flames in the distance as they drove away.

“We just packed up what we could as fast as we could,” Stahl said at an evacuation center at the Sylmar Recreation Center, massaging his grandmother’s shoulders as she sat in a wheelchair with a Red Cross blanket on her lap. “If we’d stuck around, we would have been in trouble. Real big trouble.”

For a map of evacuated areas, view the map from Los Angeles Fire Department below:

For live traffic conditions, view the Waze map below: