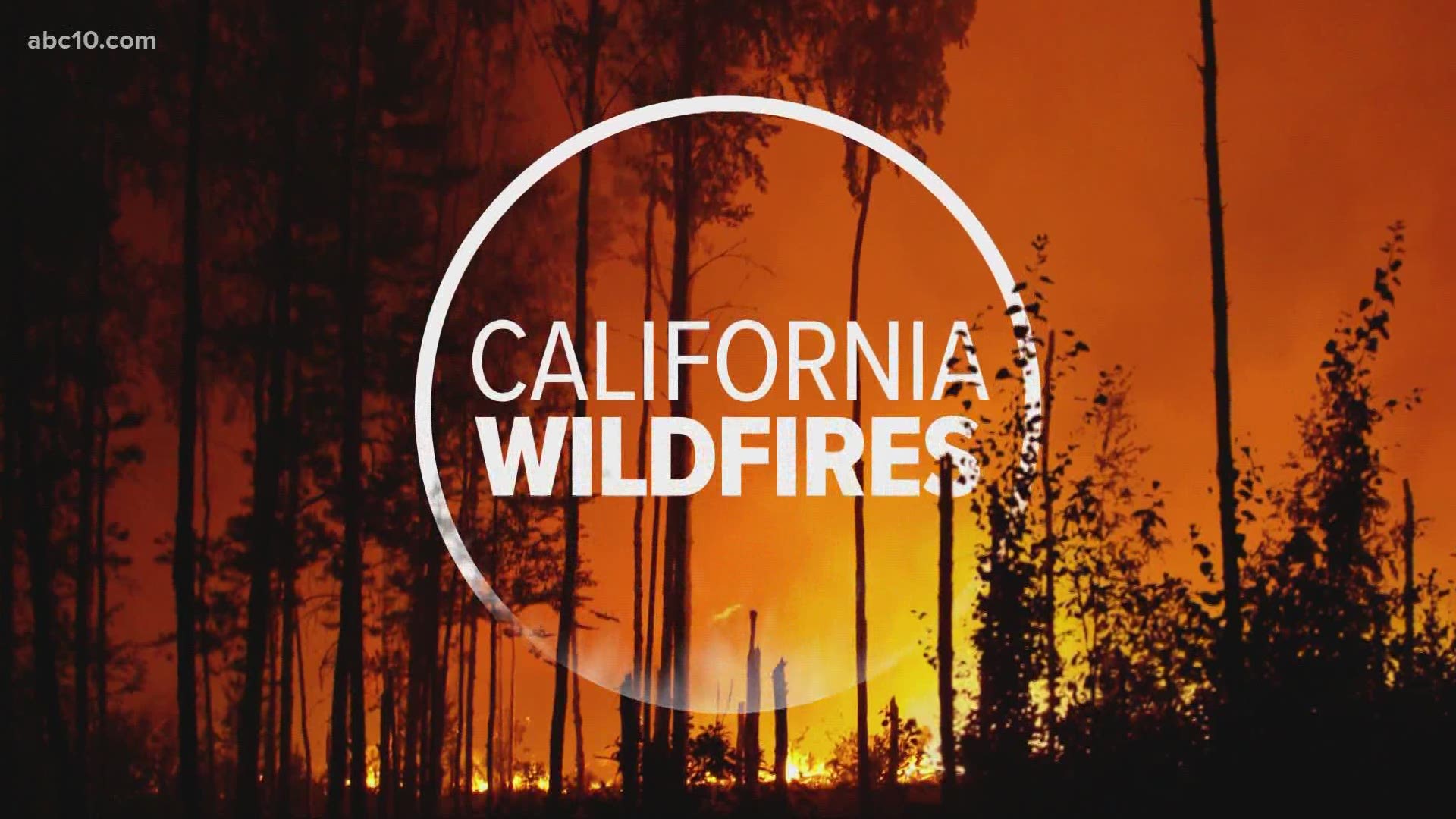 PLUMAS COUNTY, Calif. — Get the latest information on the Sheep Fire HERE.

The Sheep Fire continues to grow in Plumas and Lassen counties, reaching 27,411 acres on Monday night.

Authorities said fire crews spent time making and strengthening their dozer line on the east and west flanks of the fire. On the east flank, crews worked on extending their fire line to Diamond Mountain Motorway and are aiming to build it up to the escarpment to the top of Diamond Mountain.

Over on the west flank, crews built line in the Cheney Creek Drainage and into the old Willard Fire burn scar.

While cooler temperatures and higher humidities helped crews on Monday, officials said they remain concerned about thunderstorms in the forecast and unpredictable winds.

Updates on evacuations are provided by Lassen County Sheriff's Office.

The Sheep Fire is moving less aggressively than in the past several days, according to the U.S. Forest Service - Plumas National Forest.

Crews have been able to take advantage of good weather conditions by using air resources and progressing their control lines.

Video shows firefighters conducting structure preparation along the dozer line of the Sheep Fire, as the flames make a significant run towards Susanville community.

Though fire crews and resources have been having trouble keeping up with demand as multiple major wildfires blaze across the state, the American River Hot Shot crew is working to thin out vegetation and other fuels to help mitigate the spread of the incoming fire.

The Fire Train has been deployed in Plumas National Forest to help extinguish fires in remote areas of the North Complex Fire.

The Fire Train is a Union Pacific locomotive with a water tank car that pumps out water in needed fire zones and hot spots along the railroad tracks. For the last four days, the Fire Train has been running parallel to Highway 70 near Quincy, quelling fires as it goes.

Today alone, the train traveled more than 50 miles and is revving up to head out once again.

The Sheep Fire in Plumas and Lassen County grew about 2,000 acres in the night to encompass 25,574 acres, according to Plumas National Forest. The fire still has zero containment.

The fire, which is part of the North Complex Fire, burned actively on Sunday afternoon and evening, heading downhill and spreading significantly on the east side in the Wingfield Road area. Overnight, there was some spotting east of Highway 395 and south of Lake Leavitt, and these small fires will be monitored closely.

Plumas National Forest says that while there was spread, fire crews were able to stop the blaze from reaching the Diane Drive area and Highway 395 on that west side.

Fire crews were also able to keep the fire out of Gold Run, Hidden Hills, Susan Hills and the Susanville city limits on the northwest side of the Sheep Fire.

Several mandatory evacuations and some advisories were issued last night due to the spread. Updates on evacuations are provided by Lassen County Sheriff's Office.

As of Sunday night, the evacuation warning for Highway 395 North to Leavitt Lake (including all subdivisions) has been lifted.

The following areas have also have their mandatory evacuation order downgraded to a warning only:

All of Gold Run Road, Wingfield Road from just beyond Four Oaks Drive to Janesville and Richmond Road from just past Circle Drive to Hospital Lane are all closed according to Plumas National Forest.

Highway 395 is open without restrictions for people needing to evacuate.

Plumas National Forest warns that there is still a Red Flag Warning in effect for gusty outflow winds and dry lightning. This warning will continue until Tuesday morning at the earliest.

This is not only a concern for new fires to rage up, but also for spread, as heavy winds could push the blaze further.

Find out where all the fires in California are burning here.