A district attorney is warning people about 'slamming,' when a customer's utility provider suddenly changes, without that person's permission or knowledge. 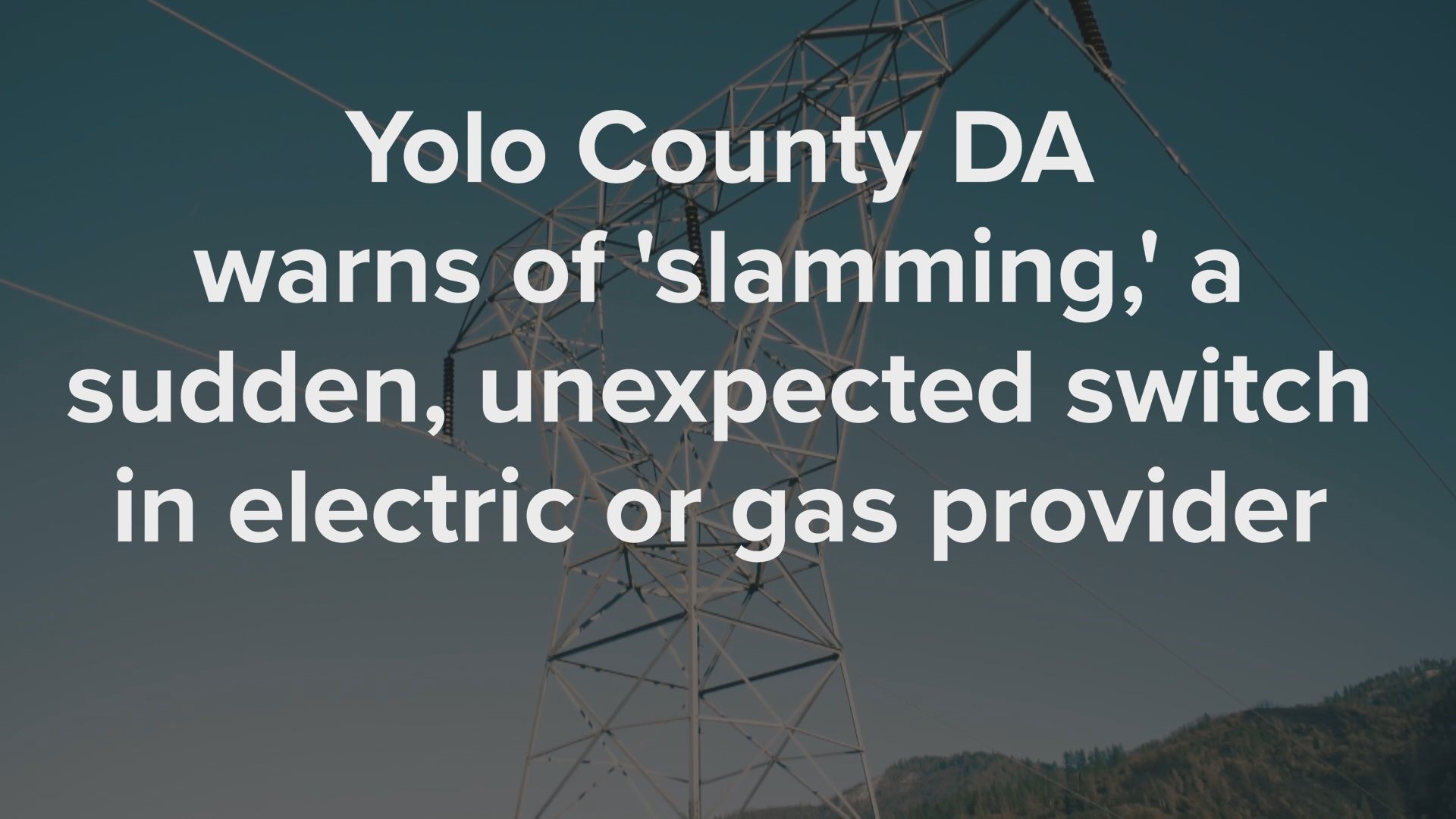 WOODLAND, Calif. — An alarming trend is prompting one local district attorney's office to warn people to be on alert.

It's called ‘slamming.’ That's when a utility company switches a customer’s service provider without telling them.

The Yolo County District Attorney is receiving reports from people in the Woodland area, saying one month the customer receives their PG&E utility bill, as usual, and the next month they suddenly have a bill from a whole new, different utility company – a switch they didn't know about or agree to make.

Kevin Clark, an analyst for the Yolo County DA’s office, told ABC10 about the complaints his office is receiving.

In all of the cases, Clark said, when people called PG&E to ask about the switch, PG&E told them to call their new provider to figure things out.

"When they get their bills in the mail, [the bills] say, 'You have this new energy company,'" Clark explained. "When [the customers] call PG&E, PG&E says, 'We have nothing to do with this...We can't help you with that, you need to call the other company that did it.' That’s consistent across-the-board" from the complaints his office has received.

In a couple of instances, he said, the new provider claimed an adult son or daughter at the customer’s home authorized the change – but those complaints are coming from customers who don’t have adult children.

It appears these changes are being made without the customer's permission or knowledge, Clark said, and some people are telling his office that their monthly bills are now much higher under the new providers.

Worst of all, Clark said, the new providers are telling some people they have to pay to get out of their contract – a contract the customer never agreed to, signed or even knew about.

“It’s odd that it’s happening," Clark said. "I don’t know how they're able to justify a contract with someone when they’ve never spoken with them or signed any paperwork.”

California has a law preventing this so-called "slamming" from happening with telecommunications companies, but ABC10’s initial investigation into this matter shows it appears the state lacks a law barring the practice for gas or electric companies.

However, ABC10’s reporting found other states, like Texas, do have laws preventing this for electric and gas utilities.

The Yolo County DA’s office isn’t publicly revealing the names of the companies doing this because they’re still trying to figure out whether this practice is legal in California. They're determining whether this constitutes an unfair business practice.

“It looks unfair, but what are the legalities of such a new thing?” Clark said. "We want to bring our findings to the [California Public Utilities Commission] and let them know what’s going on, too."

He said there are several companies that people are complaining about, and it's happening to electric and gas customers.

If this is happening to you, the Yolo County District Attorney's office wants to know. They ask people experiencing “slamming” to call their fraud hotline at 855-4-YOLO-DA or 530-666-8180 or email the office at fraud@yoloda.org.

“What we’re really wanting people to do is give us a call," Clark said, "let us know if they’ve lost any money."

Clark said a lot of the callers are older people on a fixed income, and he worries this may be a predatory practice.