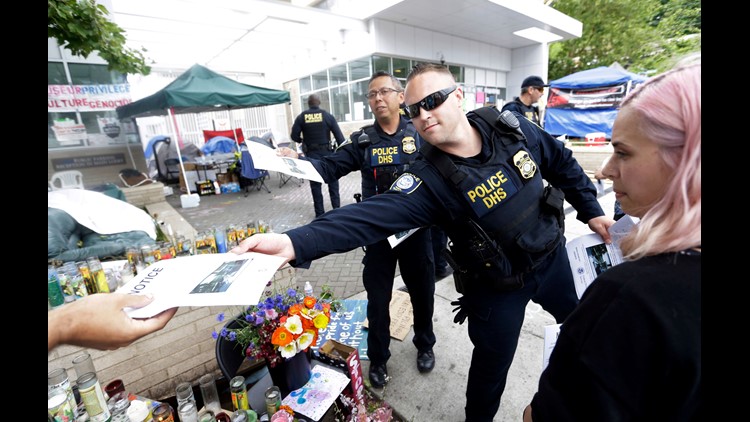 Photo by: Don Ryan, AP
Law enforcement officers hand out notices to demonstrators at a protest camp on property outside the U.S. Immigration and Customs Enforcement office in Portland, Ore., on June 25, 2018.

Federal police in riot gear arrested at least eight demonstrators Thursday and dismantled a makeshift camp on the grounds of an Immigration and Customs Enforcement facility in Portland.

Demonstrators from Occupy ICE PDX took over part of the grounds eight days ago to protest the separation of families on the U.S.-Mexican border under the Trump administration's "zero tolerance" policy.

On Thursday, Department of Homeland Security police stood shoulder-to-shoulder across the entryway to the grounds while other officers dismantled and removed the makeshift camp, protest signs and barriers of wooden crates.

A few dozen protesters walked along in front of the line of police shouting slogans at the officers. "No justice, no peace, no racist police," one group chanted. Others screamed profanities at the officers.

At least eight people were arrested, according to KOIN-TV.

Police began putting pressure on the protesters Monday by distributing fliers warning the occupation of the ICE property was illegal and violators could be arrested. The takeover forced ICE to shut down operations at the building.

Homeland Security police have taken another protester into custody at the #OccupyICEPDX site, the ninth today. pic.twitter.com/BE7NrGxqUJ

Although the office was closed, people still showed up for their scheduled appointments, KOIN-TV reports. Some of them told KOIN reporters they were never notified the facility temporarily shut down.

A spokesman for Federal Protective Services said the goal of Thursday's action was to provide access to the ICE building, according to OregonLive. Once that was finished, he said, there were no plans to completely clear the encampment from the surrounding area.

Meanwhile, a group of activists gathered at City Hall to demand that city council not cooperate with ICE and not use police against the protesters.

"It's not reasonable, compassionate or enforceable," she said, according to KGW. "So, that's the underlying problem. And Congress needs to change the immigration laws, so that people can be with their families."

A second commissioner, Chloe Eudaly, has called for the abolition of ICE or at least revoking its use of a building in Portland.