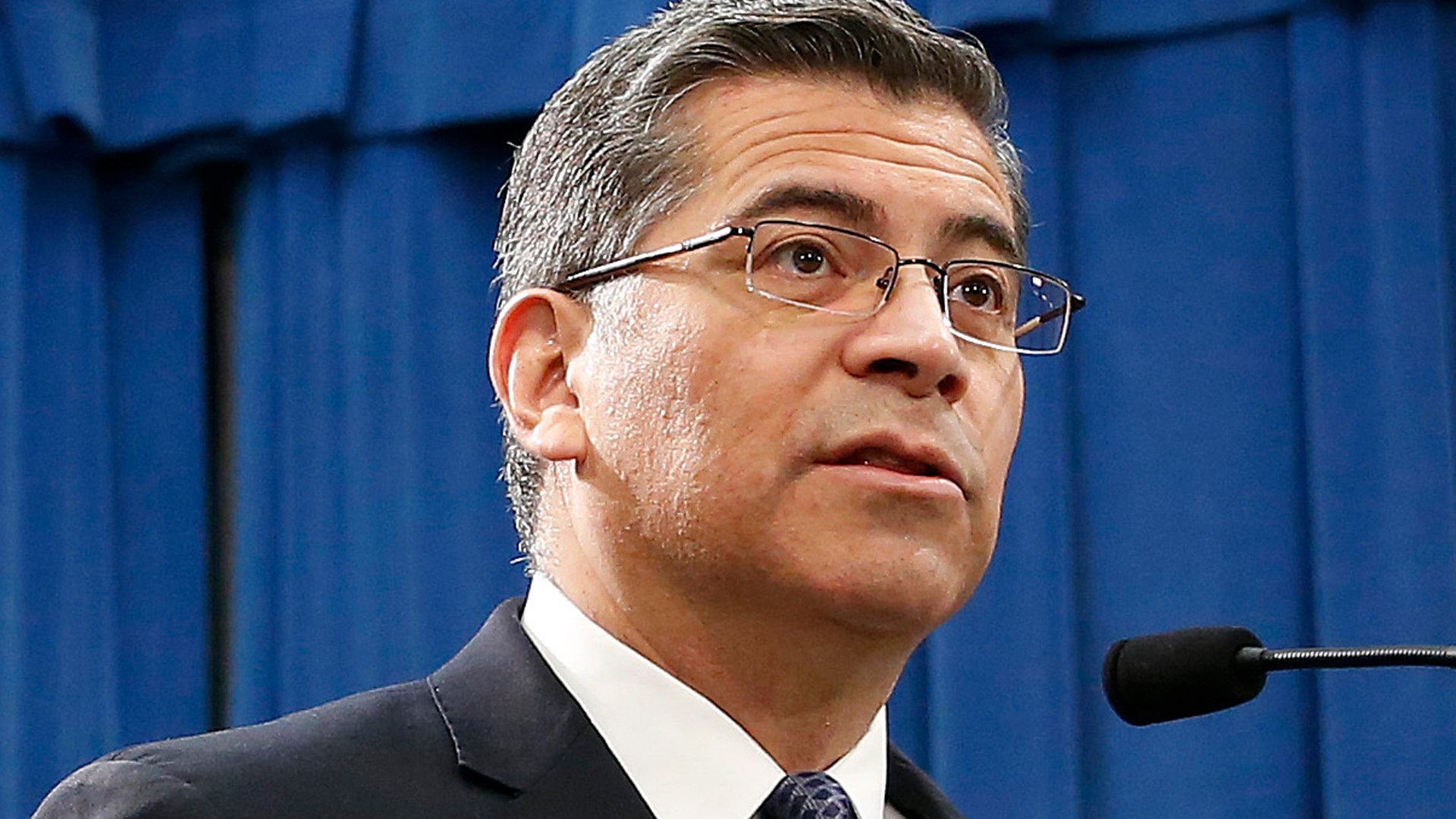 WASHINGTON — President-elect Joe Biden has picked California Attorney General Xavier Becerra to be his health secretary, putting a defender of the Affordable Care Act in a leading role to oversee his administration's coronavirus response.

If confirmed by the Senate, Becerra, will be the first Latino to head the Department of Health and Human Services, a $1 trillion-plus agency with 80,000 employees and a portfolio that includes drugs and vaccines, leading-edge medical research and health insurance programs covering more than 130 million Americans.

Credit: AP
FILE - In this June 3, 2019, file photo, California Attorney General Xavier Becerra speaks during a news conference in Sacramento, Calif. Becerra announced Friday, Nov. 20, 2020, that he dropped a lawsuit against the state Republican Party that was seeking the names and contact information of every person who used one of the state Republican party's unofficial ballot drop boxes. (AP Photo/Rich Pedroncelli, File)

Biden's selection of Becerra and Walensky was announced early Monday in a press release from the transition office. People familiar with the decision had confirmed the picks to The Associated Press on Sunday night. Biden also announced other top members of his health care team, though some posts remain unfilled.

Becerra, as the state of California's top lawyer, has led the coalition of Democratic states defending “Obamacare” from the Trump administration's latest effort to overturn it, a legal case awaiting a Supreme Court decision next year.

A former senior House Democrat, Becerra was involved in steering the Obama health law through Congress in 2009 and 2010. At the time he would tell reporters that one of his primary motivations was having tens of thousands of uninsured people in his Southern California district.

Becerra has a lawyer's precise approach to analyzing problems and a calm demeanor.

But overseeing the coronavirus response will be the most complicated task he has ever contemplated. By next year, the U.S. will be engaged in a mass vaccination campaign, the groundwork for which has been laid under the Trump administration. Although the vaccines appear very promising, and no effort has been spared to plan for their distribution, it’s impossible to tell yet how well things will go when it’s time to get shots in the arms of millions of Americans.

Becerra won't be going it alone. Biden is expected to stress a coordinated response to the virus when he publicly introduces his team this week.

Businessman Jeff Zients was named as Biden's White House coronavirus coordinator. An economic adviser to former President Barack Obama, Zients also led the rescue of the HealthCare.gov website after its disastrous launch in 2013. Former Surgeon General Vivek Murthy, a co-chair of Biden’s coronavirus task force, is returning to his post as the nation's doctor, with broader responsibilities.

Biden announced Fauci will be the president’s chief medical adviser, while continuing as director of the National Institute of Allergy and Infectious Diseases.

Adding to the group are national security expert Natalie Quillian as co-director of the coronavirus response and Yale public health specialist Dr. Marcella Nunez-Smith, who will head a new working group to reduce health disparities in COVID-19, a disease that has taken a deeper toll among minorities.

The core components of HHS are the boots on the ground of the government’s coronavirus response. The Food and Drug Administration oversees vaccines and treatments, while much of the underlying scientific and medical research comes from NIH. The Centers for Disease Control and Prevention takes the lead in detecting and containing the spread of diseases. The Centers for Medicare and Medicaid Services, or CMS, provides insurance coverage for more than 1 in 3 Americans, including vulnerable seniors, as well as many children and low-income people.

Biden still has not picked the heads of FDA and CMS.

Under President Donald Trump, CDC was relegated to a lesser role after agency scientists issued a stark early warning that contradicted Trump’s assurances the virus was under control, rattling financial markets. The FDA was the target of repeated attacks from a president who suspected its scientists were politically motivated and who also wanted them to rubber-stamp unproven treatments.

As CDC director, Walensky would replace Dr. Robert Redfield, who accurately told the public coronavirus vaccines would not be available for most people until next year, only to be disparaged by Trump as “confused.” Walensky is a leading infectious disease specialist at Massachusetts General Hospital, and has devoted her career to combatting HIV/AIDS.

Becerra’s experience running the bureaucratic apparatus of the California attorney general's office, as well as his success working with Republicans, helped seal the pick for Biden, said a person familiar with the process but not authorized to comment publicly. Becerra had worked with Louisiana’s Republican attorney general to increase the availability of the COVID-19 drug treatment Remdesivir in their states. He’s also worked closely with other Republican attorneys general on legal challenges against opioid manufacturers.

Early in California’s coronavirus response, Becerra defended broad shutdowns Gov. Gavin Newsom had put in place to curtail the pandemic, including limits on religious gatherings. Three churches in Southern California had sued Newsom, Becerra and other state officials because in-person church services had been halted.

Biden's offer was extended to Becerra on Friday. The president-elect has been under pressure from the Congressional Hispanic Caucus to appoint Latinos to the Cabinet.

Previously Becerra had served for more than a decade in Congress, representing parts of Los Angeles County. He had also served in the California state assembly after attending law school at Stanford.

His mother was born in Jalisco, Mexico, and emigrated to the U.S. after marrying his father, a native of Sacramento, California, who had grown up in Mexico.

Becerra often cites his parents as his inspiration, saying they instilled in him a strong work ethic and a desire for advancement. His father worked road construction jobs, while his mother was a clerical employee. Becerra is married to Dr. Carolina Reyes, a physician who specializes in maternal and fetal health.

In an AP profile published last year, a lifelong friend of Becerra's said he learned to stay calm and self-controlled in high school as a varsity golfer and an exceptional poker player. Becerra studied the advice of famous golfers while practicing with a set of used clubs costing less than $100.