More than 300 canines, ranging from a Chihuahua to a Rottweiler to mixed-breed dogs, were running timed obstacle courses to vie for the agility championship. 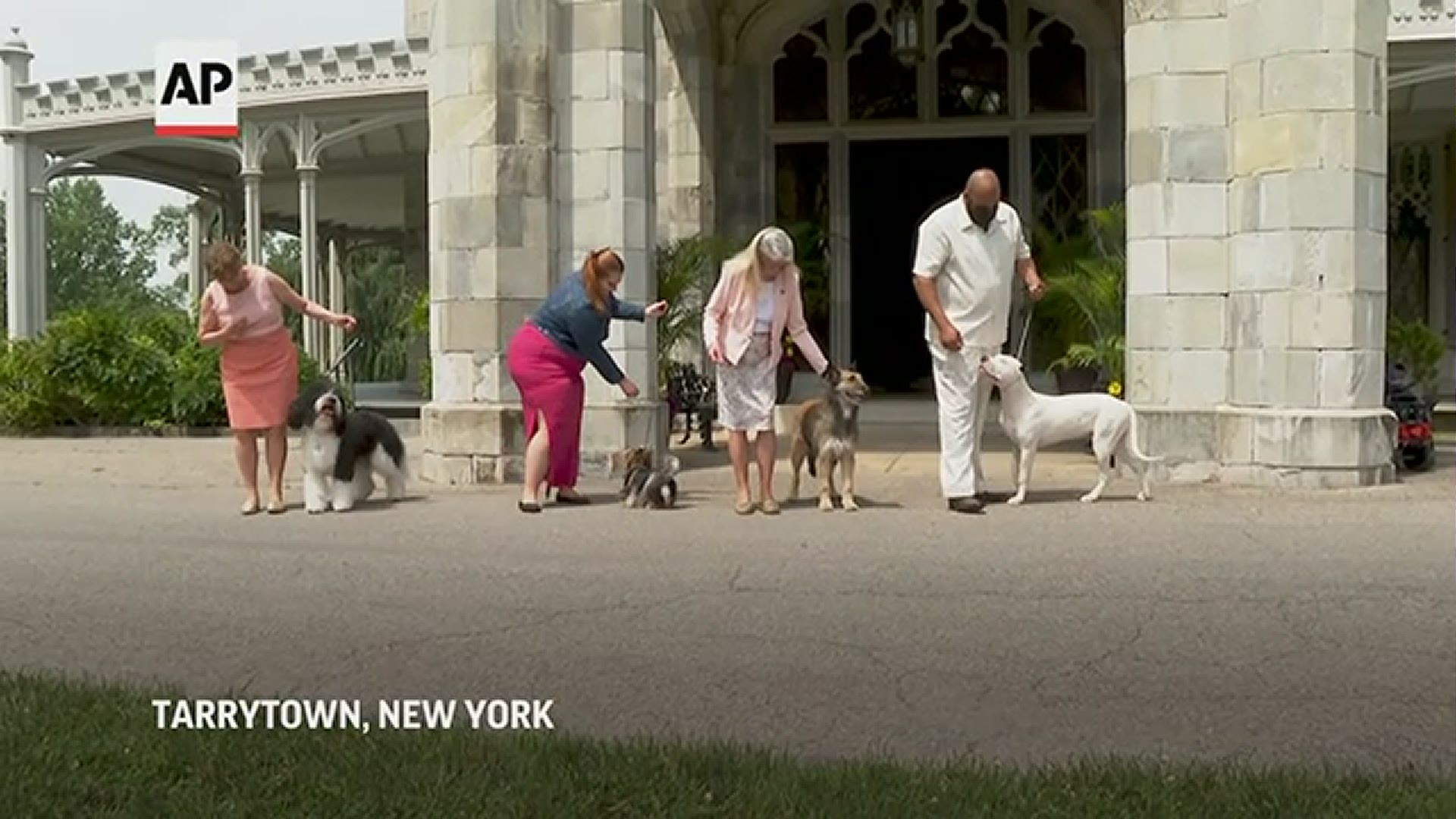 TARRYTOWN, N.Y. — The competitors could run, jump and weave — and, for the first time, relax by rolling in the grass.

The 145-year-old Manhattan event, usually held indoors in February, instead is happening outdoors at a suburban estate because of pandemic precautions that also closed the show to the public.

A border collie named Verb zoomed — and not the virtual way — to a second-time win with handler Perry DeWitt, three days before the dog's eighth birthday. The two also won the agility championship in 2019.

“He loves it. He puts it all out there,” said DeWitt, of Wyncote, Pennsylvania. “It's his favorite thing to do. He just goes for it.”

In another repeat win, an Australian cattle dog mix called Plop took a special award for the top mixed-breed dog. Plop and handler Lisa Topol also won that prize in 2019.

Events will be airing Saturday and Sunday on FOX, FS1, FS2, streaming on the Fox Now App and Fox Sports App and at westminsterkennelclub.org. Click here for times of each event.

While the show's move means forgoing the glitter of Madison Square Garden, it's a breath of fresh air for some contestants and their human partners.

Ripple the Boston terrier basked in a 70-degree (21 degrees Celsius) afternoon on her way to the final round, stretching out on softer grass than she generally finds at home in Anderson, South Carolina.

“I didn't really want to have to subject her to New York winter in the city,” handler Dan Haddy said. “June, out here, on a day like this — yeah, this is beautiful."

More than 300 canines, ranging from a Chihuahua to a Rottweiler to mixed-breed dogs, were running timed obstacle courses to vie for the agility championship.

With no crowds of spectators and plenty of elbow room on the grounds of the Lyndhurst estate in Tarrytown, New York, the nation’s most prestigious dog show opened with a more relaxed feel than usual. Either way, competing there for the first time was a childhood dream come true for Dr. Whitney Heiken, a veterinarian with a Swedish vallhund named Valkyrie.

“I would go to Westminster, wherever it was,” said Heiken, of Norristown, Pennsylvania, “but this dog loves to be outside. ... It's a huge plus for us.”

Until now, the Westminster show had been in Manhattan since its 1877 founding and was held in an open-air venue only in its first few years. This year, it's in tents at the historic Lyndhurst estate in Tarrytown, New York. Judging begins Saturday toward the coveted best in show prize, to be awarded Sunday night.

There's relatively little crossover between the fast-paced agility ring and the traditional competition where dogs trot before a judge, but a cocker spaniel named Elvis was going for both. “He's just a really remarkable dog,” says owner Sheryl Gadol of East Greenwich, Rhode Island.

Westminster added the agility contest in 2014, reflecting the growing popularity of a dynamic sport open to both purebred and mixed-breed dogs.

Plop barked and yapped through his speedy run, which came 15 months after the now 8-year-old dog had major surgery.

“For real, I did not know if he would run again,” said Topol, of New York City, who was thrilled to see Plop's confidence as he ran. “This is big-time icing on the cake.”

Some are mixes made especially for sports prowess, such as Crime, a 10-year-old border collie-Staffordshire bull terrier mix.

“He is a ‘go big or go home’ type of dog,” says owner Debbie Lazaro of Howell, New Jersey (an attorney, she names all her dogs after legal terms).

Certain breeds tend to excel in agility, hence the 59 border collies that entered Friday's contest. But it also drew some lesser-seen breeds like the mudi, a Hungarian herding dog. Kim Seiter, an agility trainer from Oak Ridge, New Jersey, was at Westminster for the first time with her dog Komoly, hoping to showcase the "super-cool, really fun, smart, hard-working” breed.

Another contestant, Stella, is part of a breed better known for snoring than athleticism — she's a bulldog. But owner Lucy Hayes realized early on that she had a “wild puppy” that loved to play, and now the 3-year-old competes in agility and dock diving.

“I thought I was doing something to keep my dog busy, but to me, now, the message that bulldogs can be active and healthy and is a big one,” said Hayes, of Dayton, Ohio. She does extra conditioning with Stella, consulted with vets to make sure she was physically OK for the sport and is careful to keep her from overheating.

Veterinarian Dr. Maria Badamo says all dogs can do agility, if they don't have developmental problems that prevent it and are kept in peak condition.

“I think it helps to keep dogs mentally, physically, one step above just hanging out on the couch," Badamo, of Midlothian, Texas, who competed Friday with her border collie, Kenobi. “You develop that bond, that connection, so much more, doing these things with them, whether it be agility or any other dog sport.”