Inauguration Day 2021: What we know about the plans so far

As Joe Biden and Kamala Harris prepare to be sworn in as president and vice president, here are the details so far about next week's key events and ceremonies. 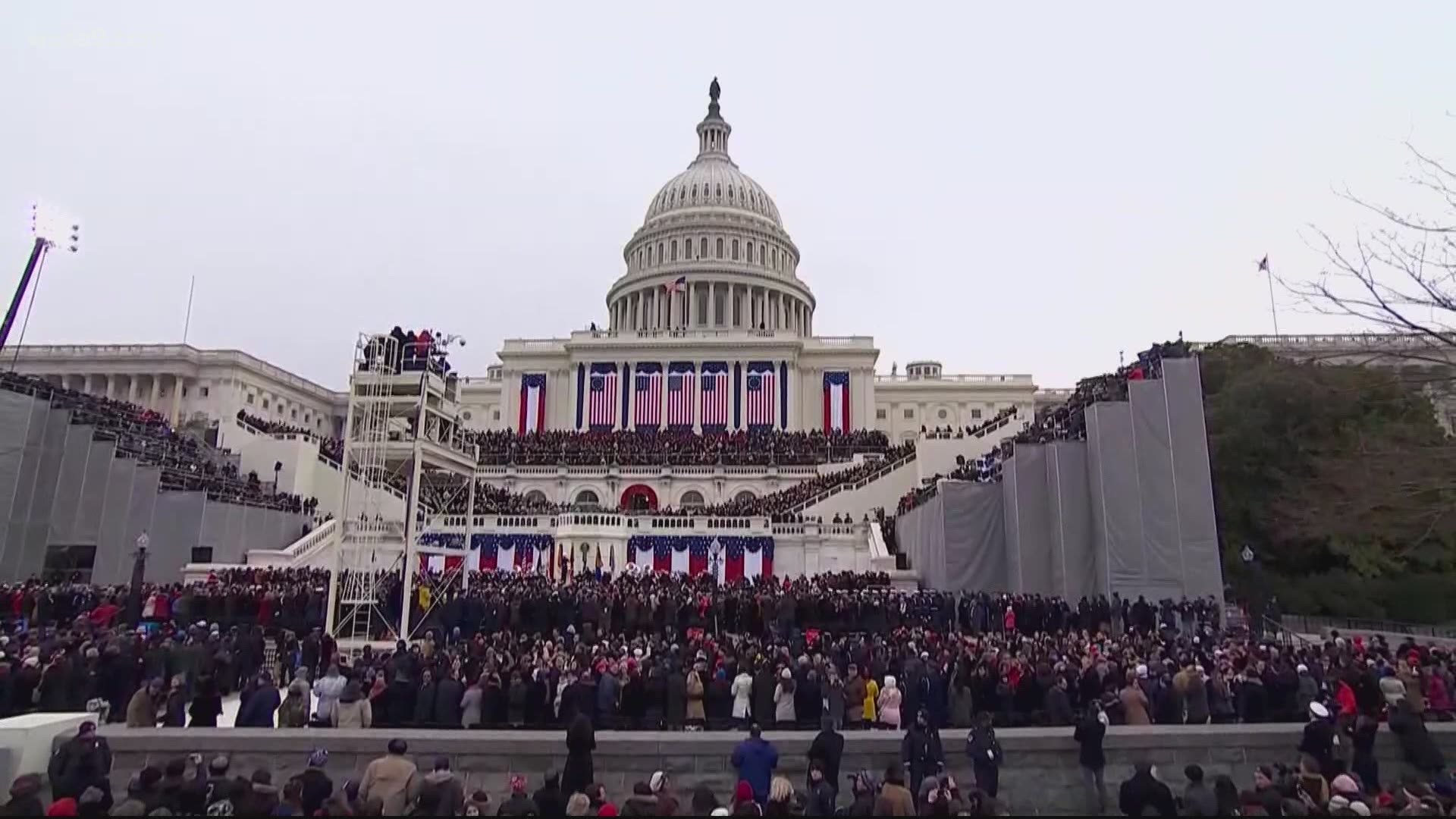 WASHINGTON — After months of heavy campaigning and some heated exchanges on the presidential debate stage amid the pandemic, President-elect Joe Biden and Vice President-elect Kamala Harris are set to be sworn in on Inauguration Day, Jan. 20.

As Biden and Harris prepare for the big moment, just days away, this year's inauguration will look different than the past due to the unprecedented nature of the COVID-19 pandemic.

Here is what to expect and how to watch:

When is inauguration day 2021?

President-elect Joe Biden and Vice President-elect Kamala Harris will be sworn in on Wednesday, Jan. 20 in Washington, D.C., with Biden's swearing in expected to happen around 12 p.m. Eastern.

Where is the inauguration being held?

The ceremony is expected to be held at the Western front of the Capitol building in Washington, D.C., which is the side that faces the National Mall and the Washington Monument.

As of one week out, D.C. is expecting sunny weather and temperatures in the 40s that day.

Biden's swearing in will happen in person, but expect the audience to be limited and Biden's inaugural committee is urging Americans not to attend in person.

Who is performing at the inauguration?

Lady Gaga will sing the national anthem at Joe Biden's inauguration and Jennifer Lopez will give a musical performance on the West Front of the U.S. Capitol when Biden is sworn in as the nation's 46th president.

At the swearing-in ceremony, the Rev. Leo O’Donovan, a former Georgetown University president, will give the invocation and the Pledge of Allegiance will be led by Andrea Hall, a firefighter from Georgia. There will be a poetry reading from Amanda Gorman, the first national youth poet laureate, and the benediction will be given by Rev. Silvester Beaman of Bethel African Methodist Episcopal Church in Wilmington, Delaware.

The committee has announced several celebrities including Justin Timberlake, Demi Lovato, Jon Bon Jovi and Tom Hanks are lined up to participate in "Celebrating America," a 90-minute special on the evening of Jan. 20.

How to watch “Celebrating America” special

The special will feature Biden and Harris, along with remarks and performances by Demi Lovato, Jon Bon Jovi, Justin Timberlake, Ant Clemons and more. The show will air live on ABC, CBS, CNN, NBC and MSNBC starting at 8:30 p.m. Eastern on Jan. 20.

On Friday, the Presidential Inaugural Committee announced Eva Longoria and Kerry Washington will introduce segments throughout the night. Including highlighting stories of young people making a difference in their communities and musical performances. Foo Fighters, John Legend, and Bruce Springsteen are also expected to perform from iconic locations across the country.

Program organizers say the display is meant to "highlight the strength of our democracy, the perseverance of our people, and our ability to come together during trying times and emerge stronger than ever before."

Can you get tickets to attend the inauguration?

The Joint Congressional Committee on Inaugural Ceremonies typically allocates 200,000 tickets for the event to congressional offices so that they can hand them out to constituents. But, lawmakers this year are only expected to receive two tickets each, on for themselves and one for a guest, the Washington Post and other outlets have reported. That is the process for obtaining a ticket to the inauguration.

The committee announced back in December that attendance at the inauguration would likely resemble that of the State of the Union.

Biden's inaugural committee has reduced the number of tickets to try and control crowds as a social distancing precaution amid the pandemic. Dr. David Kessler was hired by the committee as a chief medical adviser to ensure that strict health and safety guidelines are adhered to during the event, the Wall Street Journal reported.

What is the theme of the inauguration?

"America United" is the official theme for Inauguration Day events as Kamala Harris and Joe Biden prepare to take the oath of office, and various events and shows take place throughout the day.

Presidential Inaugural Committee Chief Executive Officer Tony Allen said in a statement,  “This inauguration marks a new chapter for the American people — one of healing, of unifying, of coming together, of an America united.”

Will Donald Trump go to the inauguration?

While it was widely speculated for weeks that Trump wouldn't go to Biden's inauguration, the president confirmed as much on Jan. 8.

He will be the first incumbent president since Andrew Johnson to skip his successor's inauguration.

Trump has offered no clues for how he would spend his final hours in office. Biden will become president at noon on Jan. 20 regardless of Trump’s plans.

In December, Biden told reporters his inauguration would look closer to what they did for the virtual DNC convention than a typical inauguration."

The inaugural committee is planning a virtual parade, instead of a traditional in-person spectacle, which, is expected to feature Americans from across the country.

“There are many grand traditions to the inaugural and we plan to honor them by highlighting more of our nation’s people than ever before while keeping everyone safe,” Tony Allen, chief executive of the inaugural committee said.

The virtual programming is also expected to feature poets, local bands and a tribute to frontline workers.

Biden, Harris to lay wreath at Tomb of the Unknown Soldier

One of the first things Biden and Harris will do after taking the oath of office is go to Arlington National Cemetery and visit the Tomb of the Unknown Soldier.

Taking the oath of office

Vice president-elect Kamala Harris will step forward on the inaugural podium and recite the oath of office just before President-elect Joe Biden does so on Inauguration Day.

Traditionally a Chief Justice of the Supreme Court typically administers the oath of office. That oath, which has been in use since 1884 reads:

"I do solemnly swear (or affirm) that I will support and defend the Constitution of the United States against all enemies, foreign and domestic; that I will bear true faith and allegiance to the same; that I take this obligation freely, without any mental reservation or purpose of evasion; and that I will well and faithfully discharge the duties of the office on which I am about to enter: So help me God."

How can I watch the inauguration?

All of the major broadcast and cable networks will be airing the inauguration ceremony live.

The Joint Congressional Committee on Inaugural Ceremonies is said to be working on "enhanced opportunities to watch the ceremonies online," according to Sen. Roy Blunt of Missouri who chairs that committee.

Is Inauguration Day a federal holiday?

Depends on where you work!

Inauguration Day is established by statute as a holiday only for federal employees who work in the "Inauguration Day area" in the nation's Capital or nearby. That's defined as the District of Columbia, Montgomery and Prince George’s Counties in Maryland, Arlington and Fairfax Counties in Virginia, and the cities of Alexandria and Falls Church in Virginia, according to the Chief Human Capitol Officers Council.

RELATED: Airbnb says it will block, cancel reservations in DC for inauguration week 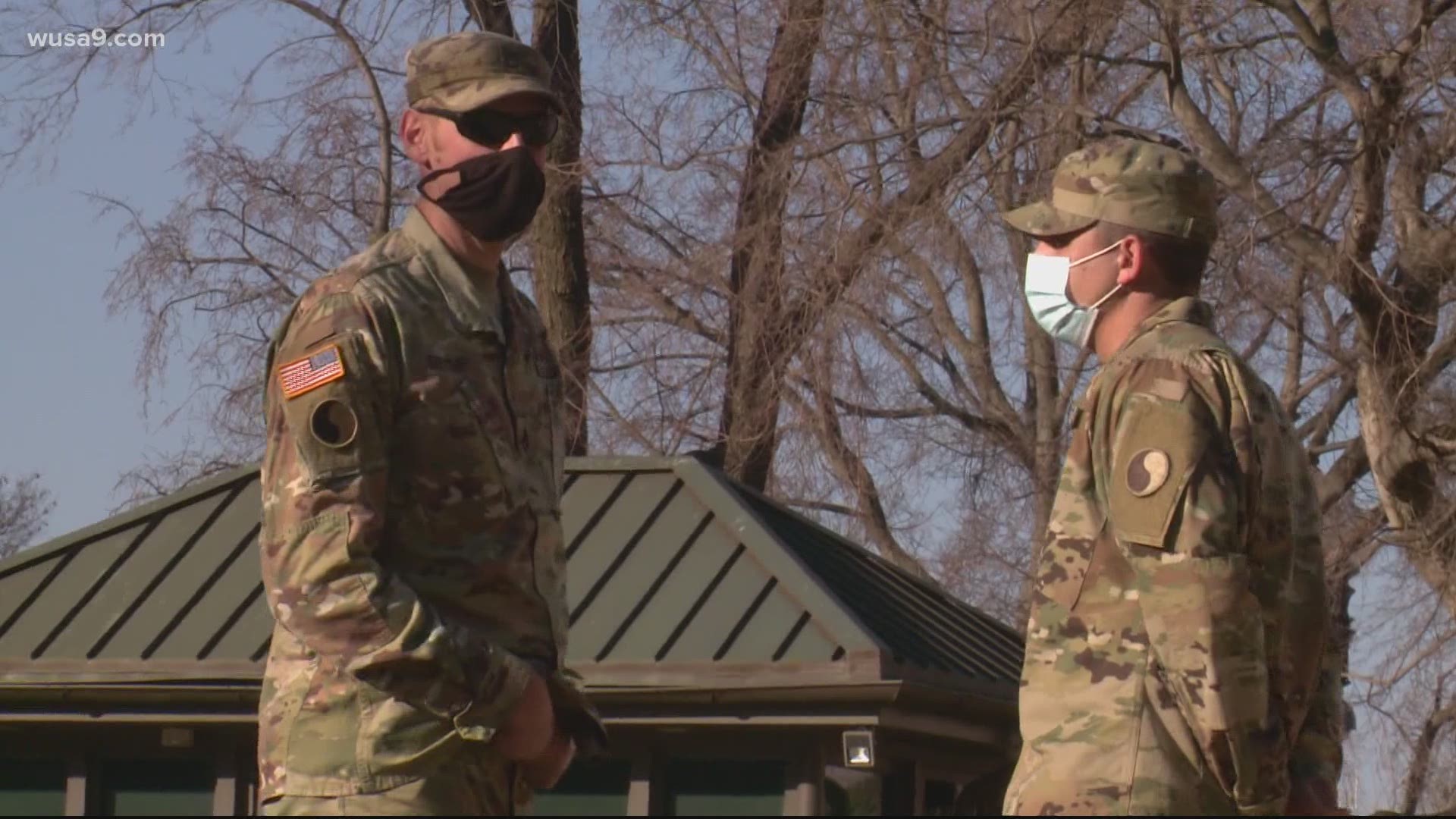