On Sunday, McCain will be buried in the cemetery at the U.S. Naval Academy in Annapolis, Maryland. 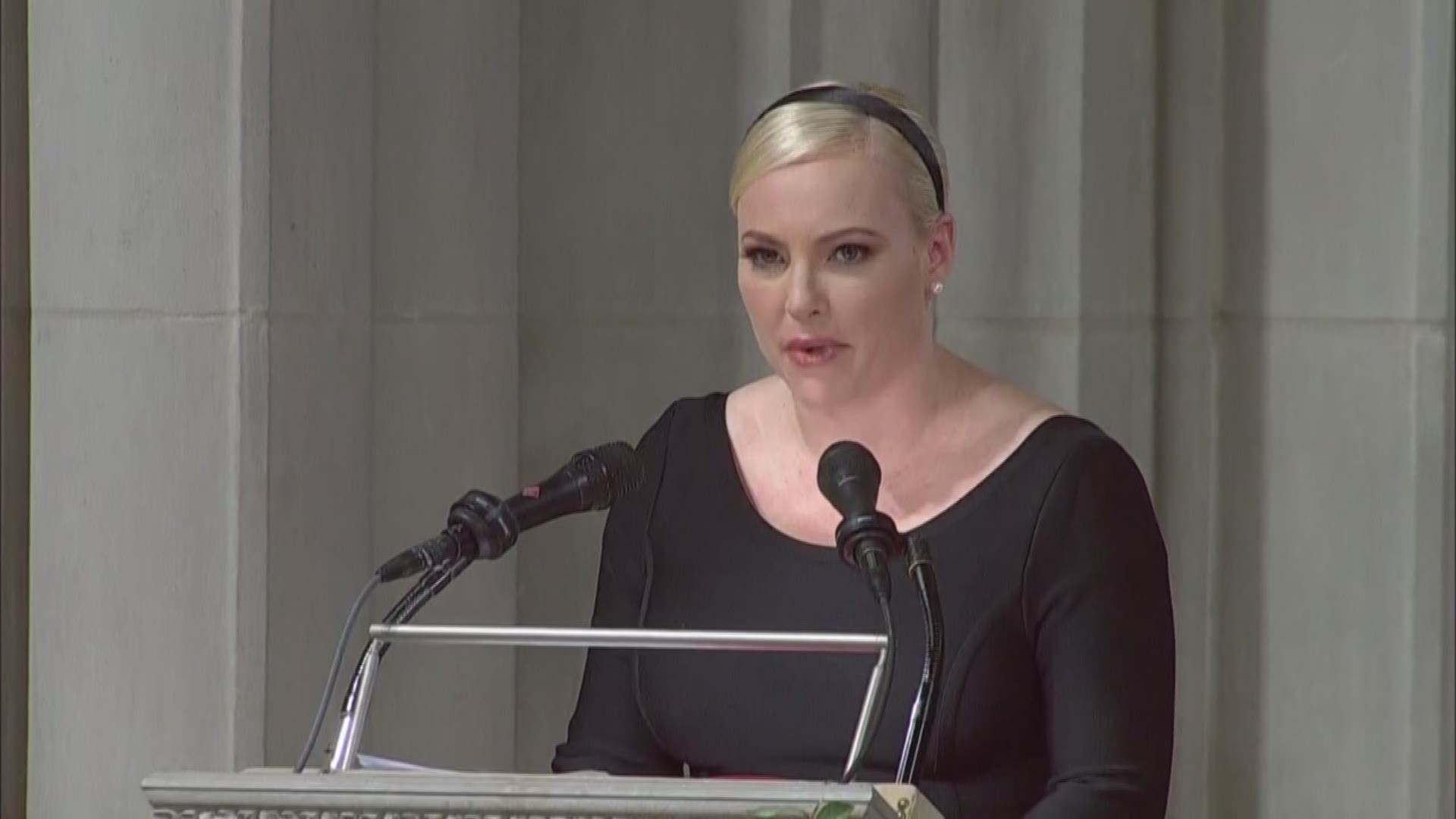 WASHINGTON — Sen. John McCain’s funeral Saturday had the feel and gravity of the memorial for a head of state as three former presidents and a who’s who of Washington and the world gathered at the National Cathedral for his service.

McCain's hearse arrived at the cathedral shortly before 9:30 as bells tolled for the centerpiece of the three-day event where speakers honored his life as war hero, prisoner, lion of the Senate and exemplar of values of duty to his country.

Family and friends, political rivals and allies, recalled McCain's remarkable life and commitment to public service. They also noted the coarse nature of today's political debate and contrasted that to how McCain relished a good fight but stood for more.

Yet it was his daughter Megan who addressed the elephant not in the church, President Donald Trump, who had not been invited. She took a direct jab at Trump and his campaign motto without repeating it.

“The America of John McCain has no need to be made great again, because America was always great,” she said. 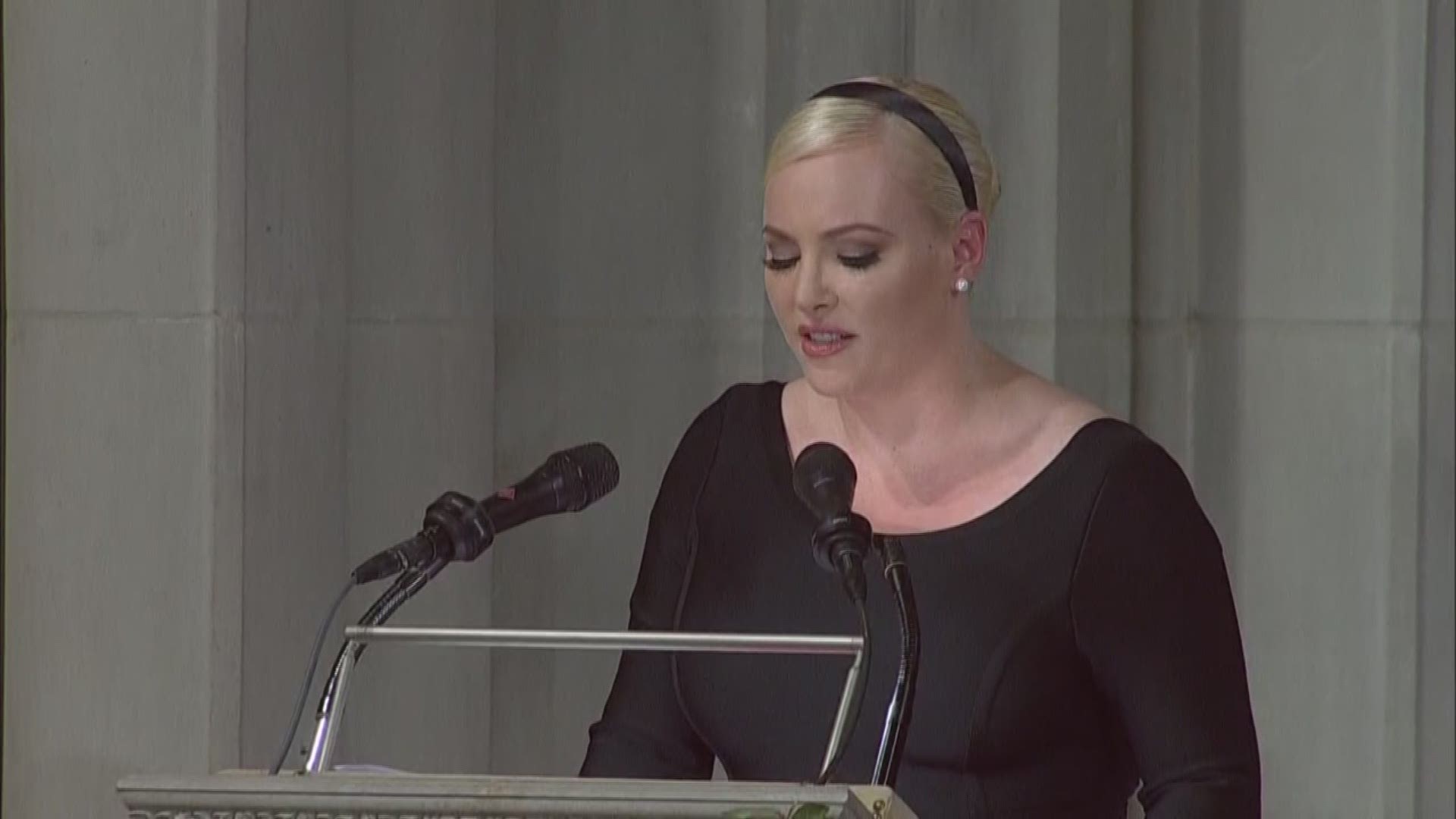 In her eulogy, she also noted his breeding as son and grandson of admirals, accomplishments across the world and tenderness as a father despite his tribulations.

She also fiercely spoke on behalf of his legacy.

“We gather here to mourn the passing of American greatness, the real thing, not cheap rhetoric from men who will never come near the sacrifice he gave so willingly, nor the opportunistic appropriation of those who lived lives of comfort and privilege while he suffered and served," she said. "He was a great fire who burned bright. In the past few days my family and I have heard from so many of those Americans who stood in the warmth and light of his fire."

Former President Barack Obama, who defeated McCain for the presidency in 2008, called the opportunity to remember him a "precious and singular honor."

“We come to celebrate an extraordinary man, a warrior, a statesman, a patriot, who embodied so much that is best in America,” Obama said.

Obama referred to the nature of today's political debate and suggested that it was unworthy of McCain. 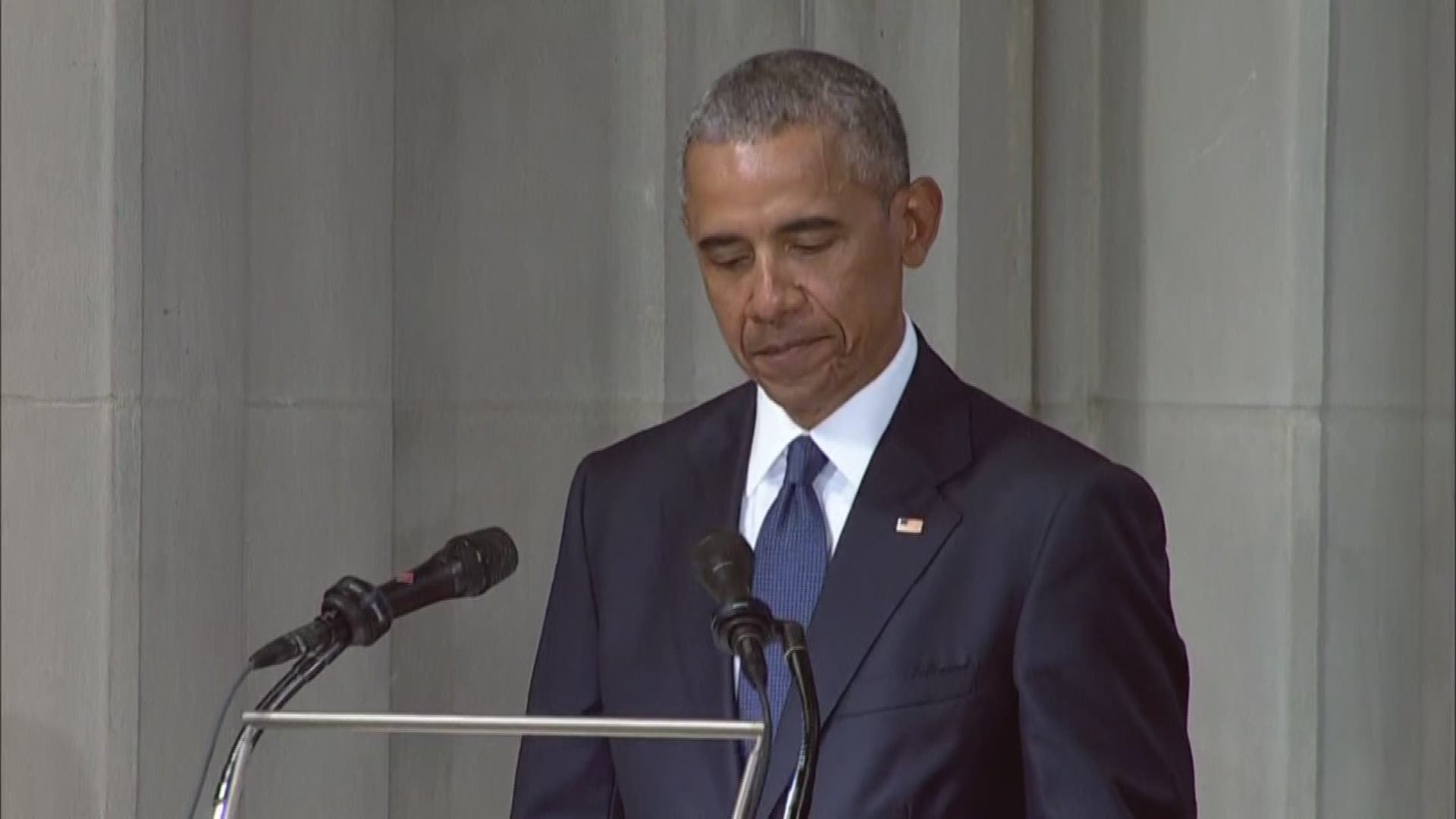 Former President George W. Bush, who also prevailed against McCain in a campaign for the presidential nomination, noted the effect of McCain's mere presence.

“Wherever John passed throughout the world people immediately knew there was a leader in their midst,” he said.

Former Sen. Joe Lieberman, I-Conn. and 2000 vice presidential candidate, and close friend, recalled McCain's love of laughter and acceptance of religious and cultural differences. Henry Kissinger, the secretary of State in the Nixon and Ford administrations, said McCain believed in American military strength but also its compassion and engagement in the world.

Bush was McCain's rival in the 2000 presidential race. The senator withdrew after losing a series of primaries to Bush on Super Tuesday. McCain later supported his former adversary. As the GOP nominee in 2008, McCain lost to Obama. In McCain's concession speech at the Arizona Biltmore, he graciously spoke of the significance of Obama's win, as the first African-American to hold the presidency.

McCain had been an outspoken advocate of Ukraine and regularly assailed Russia for its annexation of Crimea and fomenting dissent there. As well, McCain was a champion of NATO, in contrast with Trump who has regularly bashed it.

Trump's lawyer Rudy Giuliani attended and said he found the service fitting in all ways, even the barbed remarks about Trump.

“I thought it was quite beautiful for a great man," Giuliani said. "It was a great service. We are all going to miss him very, very much.”

On some of the jabs taken during the ceremony, he said: “Everyone has emotions. This is a day that they get expressed. I thought, overall, it was very appropriate.”

Before the service, McCain's family gathered in front of the U.S. Capitol as military service members carried McCain's casket down the steps to a waiting hearse. The motorcade carrying the senator's body from the U.S. Capitol departed the Capitol shortly after 8:40 a.m.

The vehicles passed in front of the White House. President Donald Trump, who pointedly was not invited to any of the events in the three days honoring McCain, had feuded frequently with the senator.

At the White House, during McCain's service, the president spent the day like any other Saturday with a series of critical tweets. Then, during McCain’s service, shortly after 10:30 a.m., Trump's motorcade left the White House and arrived at Trump National Golf Club in Loundon County, Va. He was wearing a white short-sleeved shirt and white Make America Great Again hat.

Earlier en route to the cathedral, McCain's hearse paused at the war memorial, where Cindy McCain, joined by Defense Secretary Jim Mattis and White House Chief of Staff John Kelly, laid a ceremonial wreath honoring those who died during the Vietnam War. 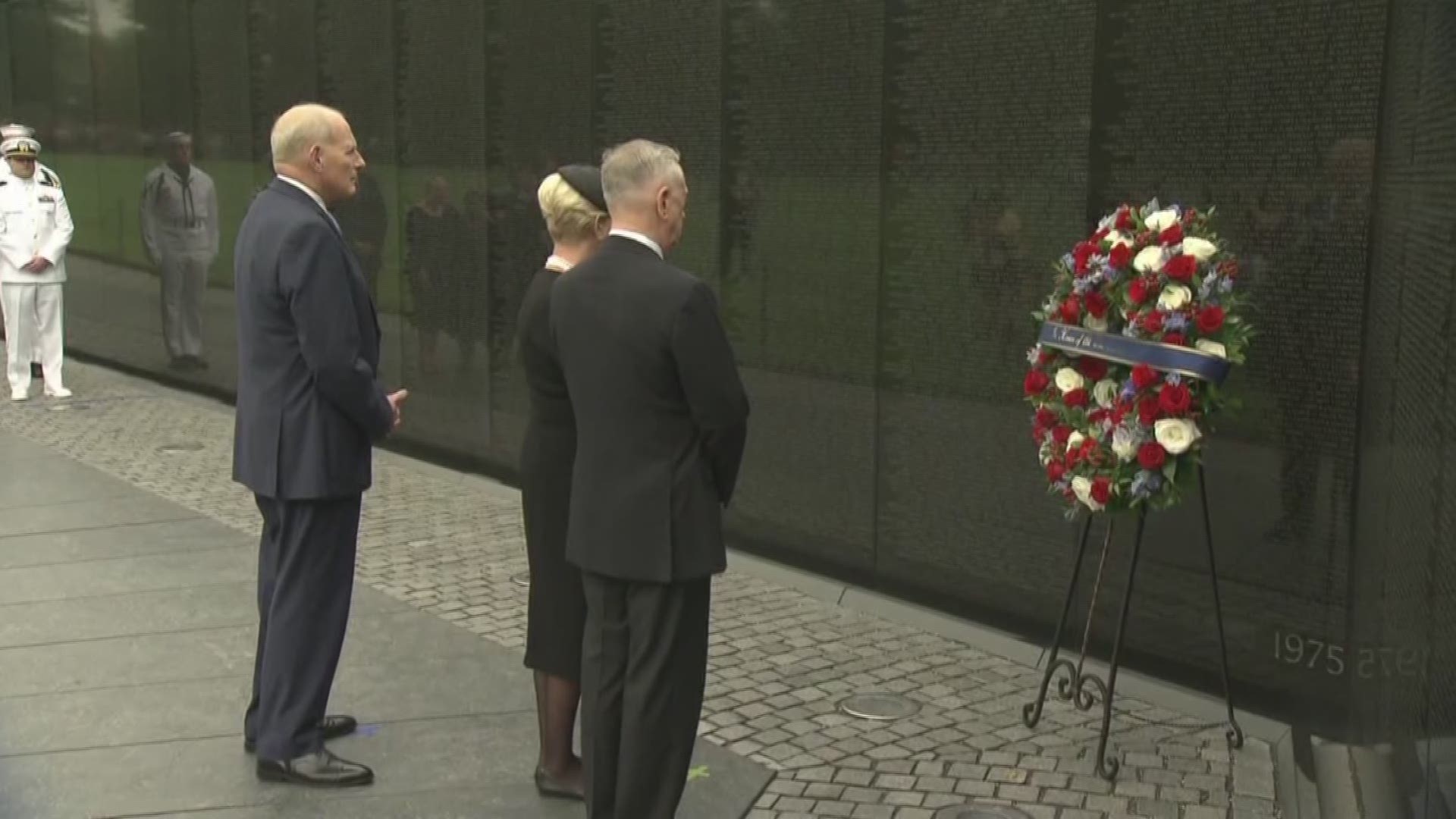 Meghan McCain sobbed and leaned on her sister Bridget. A ribbon wrapped the wreath bearing the words, In Memory of All Who Served.

Veterans, families and signs of support filled the area around the iconic black wall at the memorial site. Some embraced and held back tears while others just passed through on a Saturday morning run. McCain, a Navy pilot, was held prisoner in North Vietnam for more than five years.

Shirley Whiteaker of Knoxville said she came to Washington after she heard news of McCain's death to show support for his wife Cindy McCain and her family.

"They have done so much for this country," she said of the entire McCain family.

McCain died Aug. 25 of brain cancer. He was 81. On Sunday, he will be buried in the cemetery at the U.S. Naval Academy in Annapolis, Maryland. Services will be private.