Concerns are mounting that USPS service changes will endanger ballots in the 2020 election and are slowing down regular mail that Americans rely on. 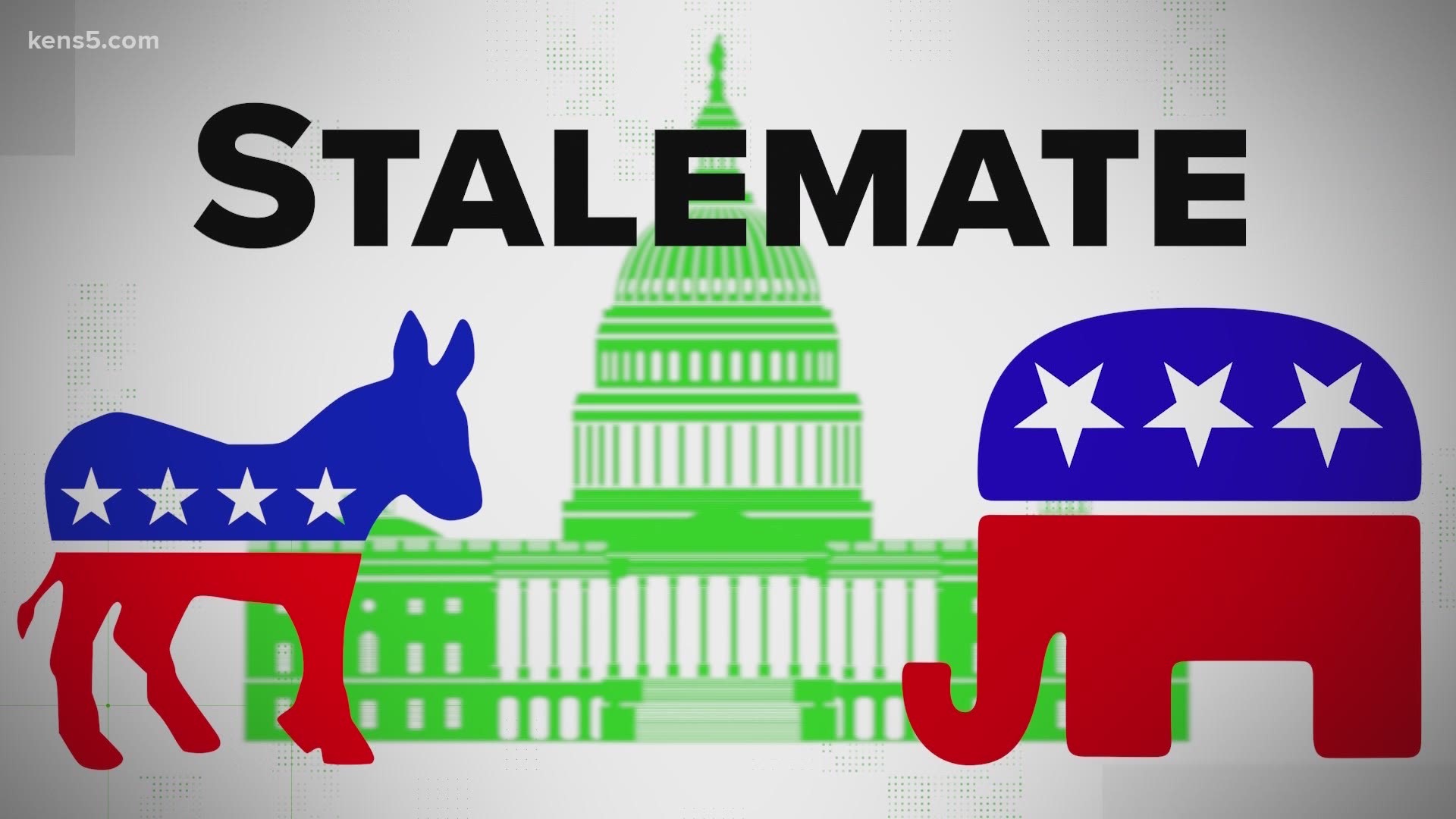 WASHINGTON — Facing a public backlash over mail disruptions, the Trump administration scrambled to respond Monday as the House prepared an emergency vote to halt delivery delays and service changes that Democrats warned could imperil the November election.

The Postal Service said it has stopped removing mailboxes and mail-sorting machines amid an outcry from lawmakers. President Donald Trump flatly denied he was asking for the mail to be delayed even as he leveled fresh criticism on universal ballots and mail-in voting.

“Wouldn’t do that,” Trump told reporters Monday at the White House. “I have encouraged everybody: Speed up the mail, not slow the mail.”

Embattled Postmaster General Louis DeJoy will testify next Monday before Congress, along with the chairman of the Postal Service board of governors.

Credit: AP
Postmaster General Louis DeJoy, left, is escorted to House Speaker Nancy Pelosi's office on Capitol Hill in Washington, Wednesday, Aug. 5, 2020. Some clarity is beginning to emerge from the bipartisan Washington talks on a huge COVID-19 response bill. An exchange of offers and meeting devoted to the Postal Service on Wednesday indicates the White House is moving slightly in House Speaker Nancy Pelosi's direction on issues like aid to states and local governments and unemployment insurance benefits. But the negotiations have a long ways to go. (AP Photo/Carolyn Kaster)

Democrats and some Republicans say actions by the new postmaster general, a Trump ally and a major Republican donor, have endangered millions of Americans who rely on the post office to obtain prescription drugs and other needs, including an expected surge in mail-in voting this fall.

RELATED: What's happening at the US Postal Service, and why?

Speaker Nancy Pelosi is calling the House back into session over the crisis at the Postal Service, setting up a political showdown amid growing concerns that the Trump White House is trying to undermine the agency ahead of the election.

Pelosi cut short lawmakers' summer recess with a vote expected Saturday on legislation that would prohibit changes at the agency. The package will also include $25 billion to shore up the Postal Service, which faces continued financial losses.

The Postal Service is among the nation's oldest and more popular institutions, strained in recent years by declines first-class and business mail, but now hit with new challenges during the coronavirus pandemic. Trump routinely criticizes its business model, but the financial outlook is far more complex, and includes an unusual requirement to pre-fund retiree health benefits that advocates in Congress want to undo.

RELATED: USPS warns states across US mail ballots may not arrive on time

Ahead of the election, DeJoy, a former supply-chain CEO who took over the Postal Service in June, has sparked nationwide outcry over delays, new prices and cutbacks just as millions of Americans will be trying to vote by mail and polling places during the COVID-19 crisis.

Trump on Monday defended DeJoy, but also criticized postal operations and claimed that universal mail-in ballots would be “a disaster.”

Later at the White House, Trump told reporters he wants "to have a post office that runs without losing billions and billions of dollars a year.''

The decision to recall the House carries a political punch. Voting in the House will highlight the issue after the weeklong Democratic National Convention nominating Joe Biden as the party's presidential pick and pressure the Republican-held Senate to respond. Senate Majority Leader Mitch McConnell sent senators home for a summer recess.

“In a time of a pandemic, the Postal Service is Election Central,” Pelosi wrote Sunday in a letter to colleagues, who had been expected to be out of session until September. “Lives, livelihoods and the life of our American Democracy are under threat from the president."

At an event in his home-state Monday, McConnell distanced himself from Trump's complaints about mail operations. But the Republican leader also declined to recall senators to Washington, vowing the Postal Service “is going to be just fine.”

"We’re going to make sure that the ability to function going into the election is not adversely affected,” McConnell said in Horse Cave, Ky. “And I don’t share the president’s concerns.”

Two Democratic lawmakers called on the FBI to investigate actions by DeJoy and the board of governors to slow the mail. "It is not unreasonable to conclude that Postmaster General DeJoy and the Board of Governors may be executing Donald Trump’s desire to affect mail-in balloting," Reps. Ted Lieu of California and Hakeem Jeffries of New York wrote in a letter to FBI Director Christopher Wray.

Senate Democratic leader Chuck Schumer and other Democrats, meanwhile, urged the postal board to use authority under a 1970 law to reverse operational changes put in place last month by DeJoy. If he declines to cooperate, "you have the authority, under the Postal Reorganization Act, to remove the postmaster general,'' the senators said in a letter to board members.

Outside a post office in Baltimore, Rep. Kweisi Mfume, D-Md., called on DeJoy to resign.

"Don’t tell me or others that you’re just trying to make the post office make money. The U.S. post office is not a business. It is a service. And it is a service to Americans that we must always protect,'' Mfume said Monday.

Congress is at a standoff over postal operations. House Democrats approved $25 billion in a COVID-19 relief package but Trump and Senate Republicans have balked at additional funds for election security. McConnell held a conference call Monday with Treasury Secretary Steven Mnuchin and GOP senators on the broader virus aid package.

The Postal Service said Sunday it would stop removing its distinctive blue mailboxes through mid-November following complaints from customers and members of Congress that the collection boxes were being taken away. And White House chief of staff Mark Meadows pledged that that "no sorting machines are going offline between now and the election.''

The legislation set for Saturday's vote, the “Delivering for America Act,” would prohibit the Postal Service from implementing any changes to operations or level of service it had in place on Jan. 1. The package would include the $25 billion in earlier funds that are stalled in the Senate.

DeJoy, the first postmaster general in nearly two decades who was not a career postal employee, has pledged to modernize the money-losing agency to make it more efficient. He eliminated most overtime for postal workers, imposed restrictions on transportation and reduced of the quantity and use of mail-processing equipment.

Trump said last week that he was blocking emergency aid to the Postal Service, as well as a Democratic proposal to provide $3.6 billion in additional election money to the states to help process an expected surge of mail-in ballots. Both funding requests have been tied up in congressional negotiations over a new coronavirus relief package.

Associated Press writers Darlene Superville and Jill Colvin in Washington and Bruce Schreiner in Frankfort, Ky., contributed to this report.