It will be Trump's first Oval Office address to the nation. 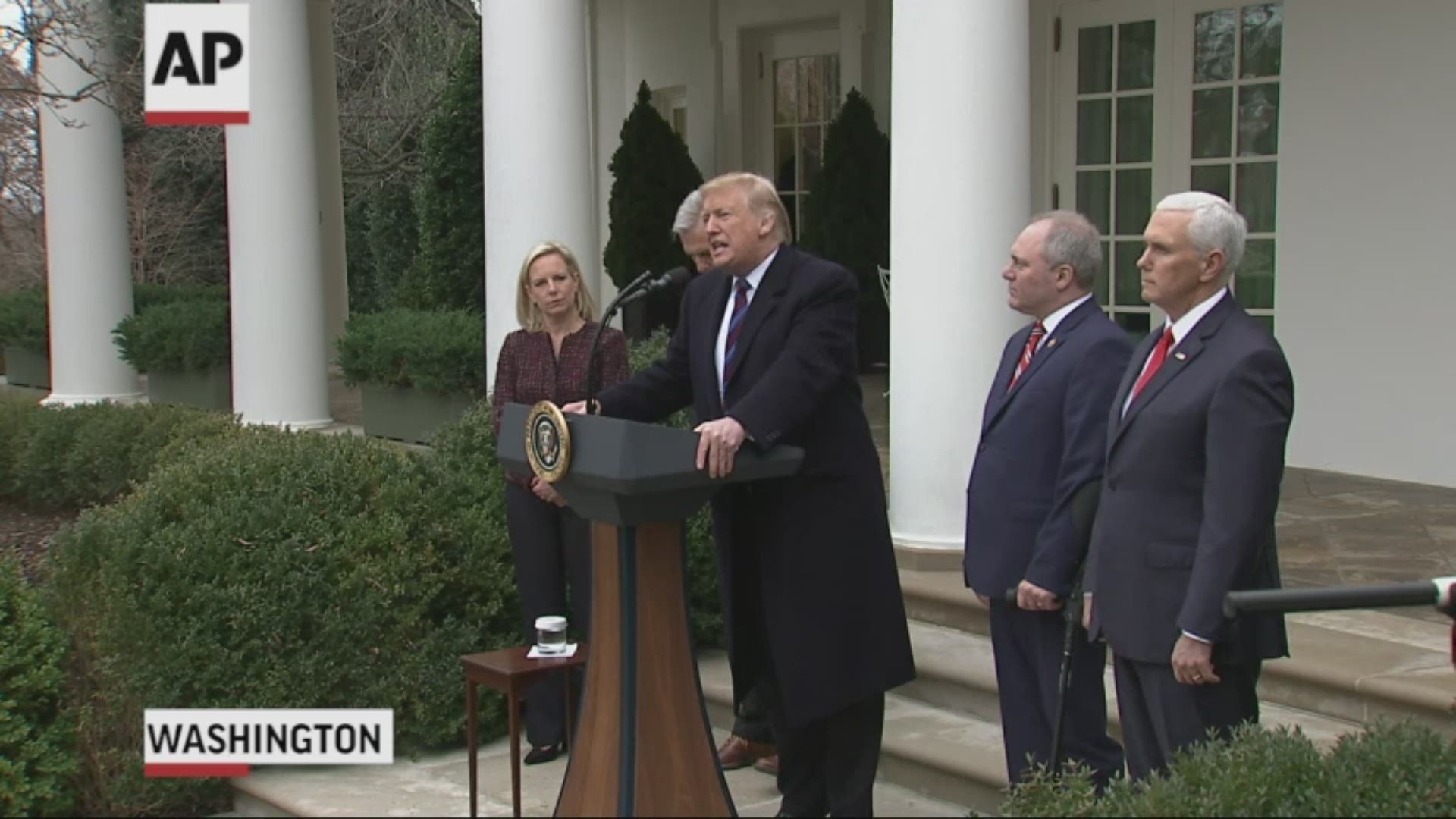 WASHINGTON — Ready to make his case on prime-time TV, President Donald Trump is stressing humanitarian as well as security concerns at the U.S.-Mexico border as he tries to convince America he must get funding for his long-promised border wall before ending a partial government shutdown that has hundreds of thousands of federal workers facing missed paychecks.

Trump is delivering his first Oval Office address Tuesday night, and then visiting the southern border on Thursday, as he tries to put pressure on resistant Democrats. Trump's evening remarks will be followed by a televised rebuttal from House Speaker Nancy Pelosi and Senate Minority Leader Chuck Schumer, who strongly oppose the wall and have repeatedly called on Trump to reopen the rest of government while border negotiations continue.

Trump and other administration officials have said the situation at the border has reached a crisis point, both on national security and humanitarian grounds. Two children have died in border custody, and an influx of families is straining health care and immigration services for asylum-seekers.

But critics say the security risks are overblown and the administration is at least partly to blame for the humanitarian situation. While the number of illegal border crossings is down from 1.6 million in 2000 to less than 400,000 last year, the number of families coming over the border has risen sharply. Some say Trump's hardline policies are slowing the process for those people, creating an overwhelming bottleneck at the border.

Trump has only recently zeroed in on the humanitarian issues as part of his pitch for a border wall, though Democrats and others argue that a wall will not fix those problems. And he's not abandoning his security argument.

In a fundraising email Tuesday addressed to his supporters, Trump declared: "I want to make one thing clear to Chuck Schumer and Nancy Pelosi: Your safety is not a political game or a negotiation tactic!"

The White House, which requested eight minutes to make the case on TV Tuesday night, invited representatives from cable news outlets to lunch ahead of the address in a gesture that is usually reserved for the lead-up to State of the Union speeches.

Trump's administration has been discussing the idea of declaring a national emergency to allow him to move forward with the wall without Congress approving the more than $5 billion he wants. Trump was not expected to make that declaration Tuesday night, said two people familiar with the White House plans, but he could change course.

Trump has also been making calls to members of Congress, and several Republicans were expected to visit the White House, according to a person familiar with the outreach but not authorized to publicly discuss private sessions.

The partial government closure, now in its 18th day, is the second-longest in history. With no end in sight, Trump's self-proclaimed deal-making skills are coming under scrutiny. Trying to increase the heat on opponents, the administration has emphasized the humanitarian issues in recent days, with Vice President Mike Pence and top aides making the case on television.

"The passion you hear from President Trump, his determination to take this case to the American people, as he will tonight in his national broadcast from the Oval Office, comes from this president's deep desire to do his job to protect the American people," Pence said Tuesday on ABC's "Good Morning America." He also appeared on CBS and NBC.

Pence, who led staff-level negations over the weekend, also said the idea of an emergency declaration remains a possibility. Such a move would certainly draw legal challenges, and Trump — who told lawmakers he would be willing to keep the government closed for months or even years — has said he would like to continue negotiations for now.

No. 2 House Democratic leader Steny Hoyer of Maryland said Tuesday that he believes Trump does not have legal authority to declare a national emergency and unilaterally build a Southwest border wall. Doing so "certainly could" be an abuse of power, he said.

Leaders of the nonpartisan National Governors Association made public a letter Tuesday sent to Trump and congressional leaders a day earlier, calling on them to reopen the government, saying "shutdown should not be a negotiating tactic as disagreements are resolved."

Leaning on Senate Republicans, some of whom are growing anxious about the impact of the shutdown, Pelosi said the House would begin passing individual bills this week to reopen federal agencies, starting with the Treasury Department to ensure Americans receive their tax refunds.

In a pre-emptive move, the White House said Monday that tax refunds would be paid despite the shutdown. That shutdown exemption would break from past practice and could be challenged.

There were other signs the administration is working to contain the fallout from the shutdown, which has furloughed 380,000 federal workers and forced an additional 420,000 to work without pay. The National Park Service said it was dipping into entrance fees to pay for staffing at some highly visited parks to maintain restrooms, remove up trash and patrol the grounds, after reports of human waste and garbage overflowing in some spots.

Over the weekend, the federal agency tasked with guaranteeing U.S. airport security acknowledged an increase in the number of employees missing work or calling in sick.

But Trump and the Transportation Security Administration pushed back on any suggestion that the call-outs represented a "sickout" that was having a significant effect on U.S. air travel. Over the weekend, travelers reported longer checkpoint lines at some airports, including LaGuardia in New York.

TSA said the effect was "minimal" and that it screened more than 2.2 million passengers Sunday, a historically busy day due to holiday travel. Ninety percent waited less than 15 minutes, the agency said.

Federal workers still on the job apparently will miss this week's paychecks. Acting White House chief of staff Mick Mulvaney said over the weekend that if the shutdown continued into Tuesday "then payroll will not go out as originally planned on Friday night."

Trump asserted he can relate to the plight of the federal workers who aren't getting paid, though he acknowledged they will have to "make adjustments."

Talks over ending the shutdown have been at an impasse over Trump's demand for the wall. He has offered to build it using steel rather than concrete, billing that as a concession to Democrats' objections. They "don't like concrete, so we'll give them steel," he said.

But Democrats have made clear that they object to the wall itself, not what it's made of. They see it as immoral and ineffective and prefer other types of border security funded at already agreed-upon levels.

"Maybe he thinks he can bully us. But I'm from Brooklyn. You let a bully succeed, you'll be bullied again worse," Schumer said at a breakfast with the Association for a Better New York.

Asked whether cracks were forming between the White House and Republicans eager for the shutdown to end, Pence told reporters at a briefing Monday that, "We've been in touch with those members and others."

He said he and Homeland Security Secretary Kirstjen Nielsen would brief lawmakers at the Capitol on Tuesday and Wednesday.

Among Republicans expressing concern was Sen. Susan Collins, R-Maine, who has said Senate Majority Leader Mitch McConnell, R-Ky., should take up funding bills from the Democrat-led House. But McConnell has said he won't ask members to vote on bills that Trump won't sign.