On the third day since Friday's quake hit Turkey and Greece, rescue teams appeared to be finding more bodies than survivors in Izmir, Turkey’s third-largest city. 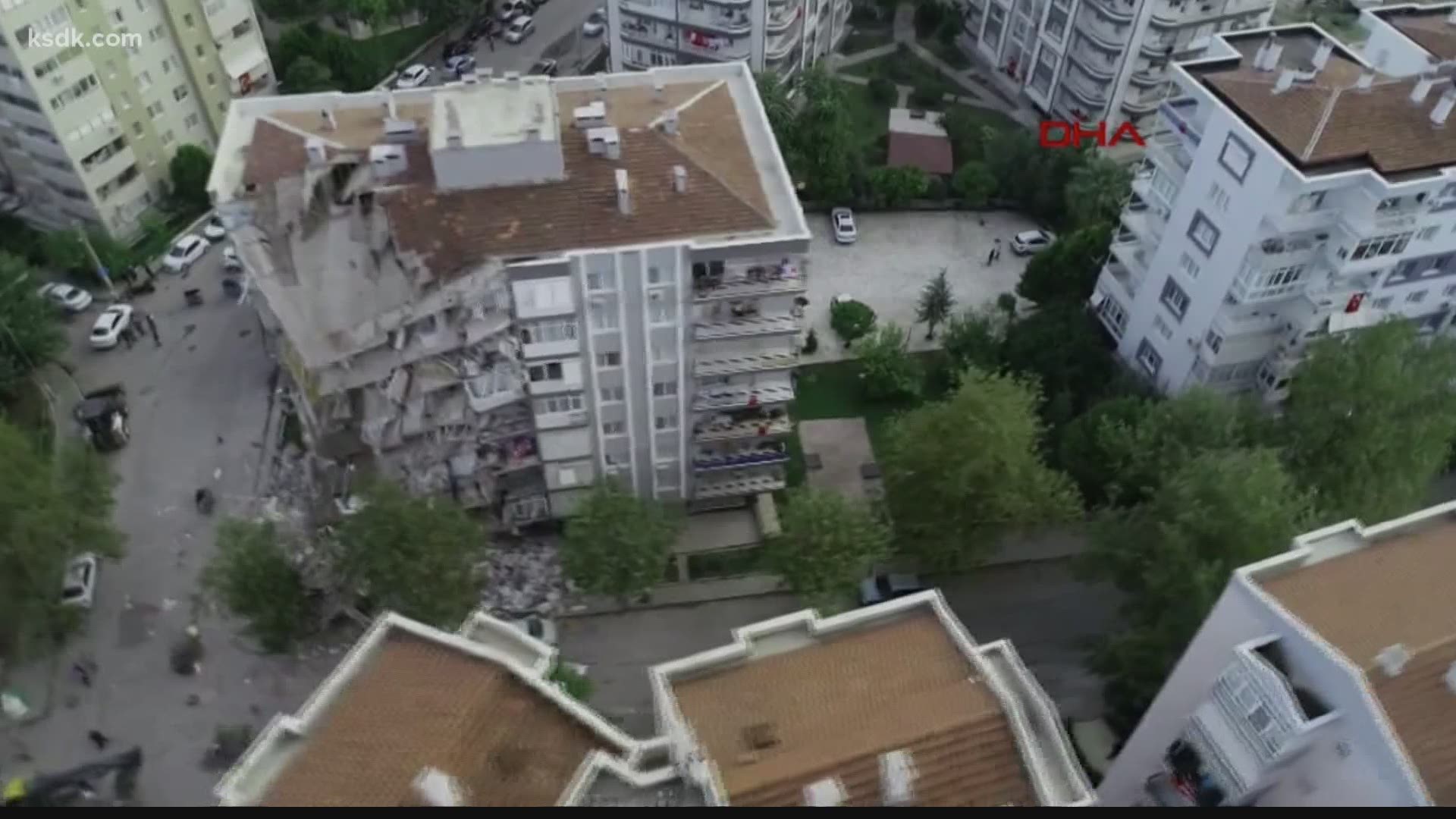 İZMIR, Turkey — Rescue workers in western Turkey extricated a 70-year-old man from a collapsed building Sunday, some 34 hours after a strong earthquake in the Aegean Sea struck Turkey and Greece, killing at least 71 people and injuring more than 900.

The man was pulled out of the rubble overnight and doing well at a hospital, according to the Turkish health minister. The minister tweeted that the survivor, Ahmet Citim, told him, “I never lost hope.” The operation that saved Citim was the latest in a series of remarkable rescues after the Friday afternoon earthquake.

But on the third day since the disaster, search-and-rescue teams appeared to be finding more bodies than survivors in Izmir, Turkey's third-largest city. They continued searching in eight toppled buildings, but work was paused at one when authorities determined the damaged structure next door was also at risk of falling, forcing rescuers and people waiting outside to retreat.

The earthquake was centered in the Aegean northeast of the Greek island of Samos. Turkey’s Disaster and Emergency Management Presidency (AFAD) raised the death toll Sunday in Izmir province to 69. The agency said 949 people were injured in Turkey, with more than 220 still receiving treatment Sunday.

The earthquake also killed two teenagers on Samos and injured at least 19 other people on the island.

There was some debate over the magnitude of the earthquake. The U.S. Geological Survey rated it 7.0, while the Istanbul's Kandilli Institute put it at 6.9 and AFAD said it measured 6.6.

The quake triggered a small tsunami that hit Samos and the Seferihisar district of Izmir, drowning one elderly woman. The tremors were felt across western Turkey, including in Istanbul as well as in the Greek capital of Athens. Hundreds of aftershocks followed.

Credit: AP
A local resident, staying outdoors for fear of aftershocks, watches as members of rescue services search for survivors in the debris of a collapsed building in Izmir, Turkey, Saturday, Oct. 31, 2020. (AP Photo/Darko Bandic)

“It’s not the earthquake that kills but buildings,” he added, repeating a common slogan.

Turkey has a mix of older buildings and cheap or illegal construction, which can lead to serious damage and deaths when earthquakes hit. Regulations have been tightened in light of earthquakes to strengthen or demolish buildings and urban renewal is underway in Turkish cities but it is not happening fast enough.

Two destroyed apartment buildings in Izmir where much of the rescues are taking place had received reports of “decay” in 2012 and 2018, according to the municipal agency in charge of such certificates. Turkish media including the Hurriyet newspaper said one of the apartments, which was built in 1993, was at risk of earthquake damage because of its low quality concrete and the lack of reinforcements. However, the building continued to be occupied.

Credit: AP
Rescue workers and local people carry a wounded person found in the debris of a collapsed building, in Izmir, Turkey, Friday, Oct. 30, 2020, after a strong earthquake in the Aegean Sea has shaken Turkey and Greece. Turkey's Disaster and Emergency Management Presidency said Friday's earthquake was centered in the Aegean at a depth of 16,5 kilometers (10.3 miles) and registered at a 6.6 magnitude. (AP Photo/Ismail Gokmen)

A 73-year-old survivor from one of those buildings said she was on her third-floor balcony when the quake struck and believes there were at least 50 people in the building, which also had a café on the bottom floor.

“In the first tremor nothing happened. During the second tremor, the seventh floor, sixth and fourth floors fell on top of another like a sandwich,” Suzan Dere said. “The building collapsed in a cloud of dust onto the street with a very loud noise. It all happened within one minute.”

Credit: AP
People stand outside their homes in Izmir, Turkey, Friday, Oct. 30, 2020, after a strong earthquake in the Aegean Sea has shaken Turkey and Greece. Turkey's Disaster and Emergency Management Presidency said Friday's earthquake was centered in the Aegean at a depth of 16.5 kilometers (10.3 miles) and registered at a 6.6 magnitude.(AP Photo/Ismail Gokmen)

AFAD said nearly 6,400 personnel had been activated for rescue work and hundreds of others for food distribution, emergency help and building damage control.

Turkey is crisscrossed by fault lines and is prone to earthquakes. In 1999, two powerful quakes killed some 18,000 people in northwestern Turkey. Earthquakes are frequent in Greece as well.

In a rare show of unity amid months of tense relations over energy resources in the eastern Mediterranean, Greek and Turkish government officials issued mutual messages of solidarity over the quake toll.

Pope Francis on Sunday asked the faithful to pray for the people of the Aegean Sea.

The quake occurred as Turkey was already struggling with an economic downturn and the coronavirus pandemic. So far, Turkey has more than 10,000 confirmed virus deaths but some experts have accused the government of concealing the true impact of the virus with the way it counts new cases.