“I’m not trying to be political but there’s just so much division and sadness that going and doing something beautiful, the way people respond to flowers is just incredible." 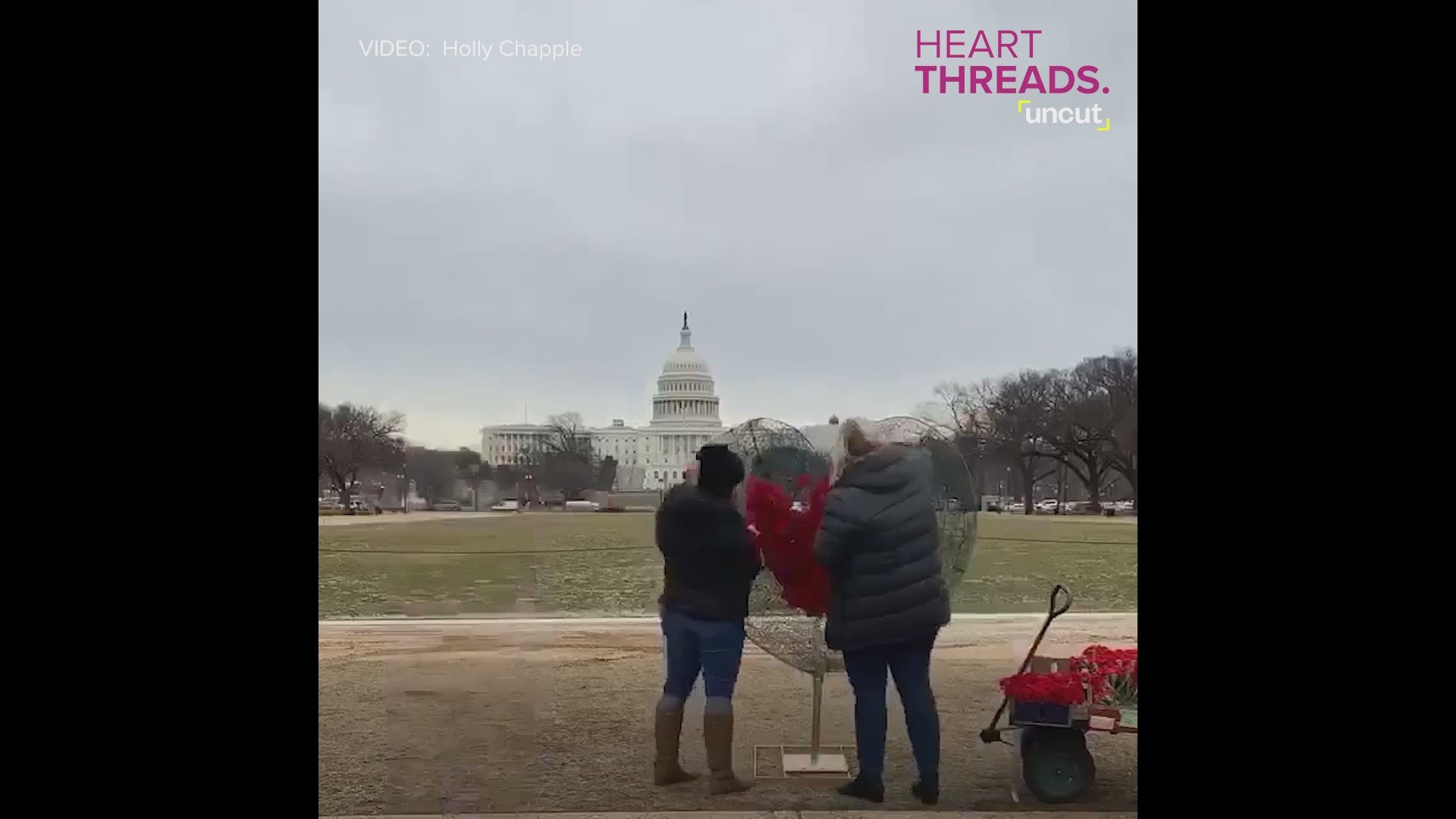 WASHINGTON — It was a gray morning over Washington D.C. on Valentine’s Day when a van pulled up to the National Mall. A blonde woman hopped out of the vehicle, and with the help of her assistants, dragged a six-foot-tall metal heart out of the car.

They set up in front of the U.S. Capitol Building on the National Mall and began their work.

Holly Chapple, the blonde, and her team began the process of adding more than 2,000 flowers to the wire frame her husband Evan had created. Quickly, the design began to take shape, she said, and people began to stop to take photos.

The process had begun last week, while she was standing in the flower shop with her son. They were brainstorming what to do for the holiday. As a wedding and event designer, she doesn’t have her own shop but still wanted to do something big: A giant heart.

“I envisioned this and my son, who actually works for the government, happened to be here,” Chapple explained on Friday. “Then he said, ‘you know, D.C. needs some love. The people in D.C. would probably really appreciate it.’”

Chapple agreed and they set about making it happen. Their flower wholesaler, DVFlora donated the fresh carnations, and she harvested dry hydrangeas and painted them for the trim. They purchased tulle and made sure they were even allowed to set up on the National Mall.

“I’m not trying to be political but there’s just so much division and sadness that going and doing something beautiful, the way people respond to flowers is just incredible,” she said. “It was the best Valentine’s Day I’ve ever had.”

She said loads of people approached, tourists and downtown workers, all excited to see the giant floral heart and snap a photo.

“I met one woman who was coming up the street … and she was just glowing!” Chapple said. The woman, it turns out, worked for the Park Service. “She was alive with complete joy. You could tell she just respected her job and her city so much.”

They had couples of all ages taking photos and decided to take the act on the road. Chapple and her team rolled into Chinatown and set up shop, spreading the love and meeting folks as they stopped to take pictures.

“We could barely fit it in the van, and I was afraid we were going to lose it on the frame,” she said.

They went to the Kennedy Center too, and the Washington Monument.

“It was just incredible, and it shows me the power of flowers that they can be used in an artistic way and make a difference in people’s lives,” Chapple said.

At the end of the day, she took the heart back out to Loudoun County, Va. – where she lives – and delivered it to Tuscarora Mill Restaurant, where she has been doing the flowers for years.

“It was a good way to spend Valentine’s, it was just the most loving day!” she exclaimed.

Her son posted their timelapse video of the project to the Washington D.C. subreddit, and it immediately took off.

Holly Chapple is well-known in the wedding circuit, having been featured in several magazines and creating a network of florists and event designers called Chapel Designers that meets each year to collaborate.

Together with her husband, she owns and operates Hope Flower Farm in Waterford.