PG&E warns it could cut power to cities for days

People and cities are getting a warning that PG&E, as a wildfire prevention method, could cut power for as many as five days if fire conditions are bad. 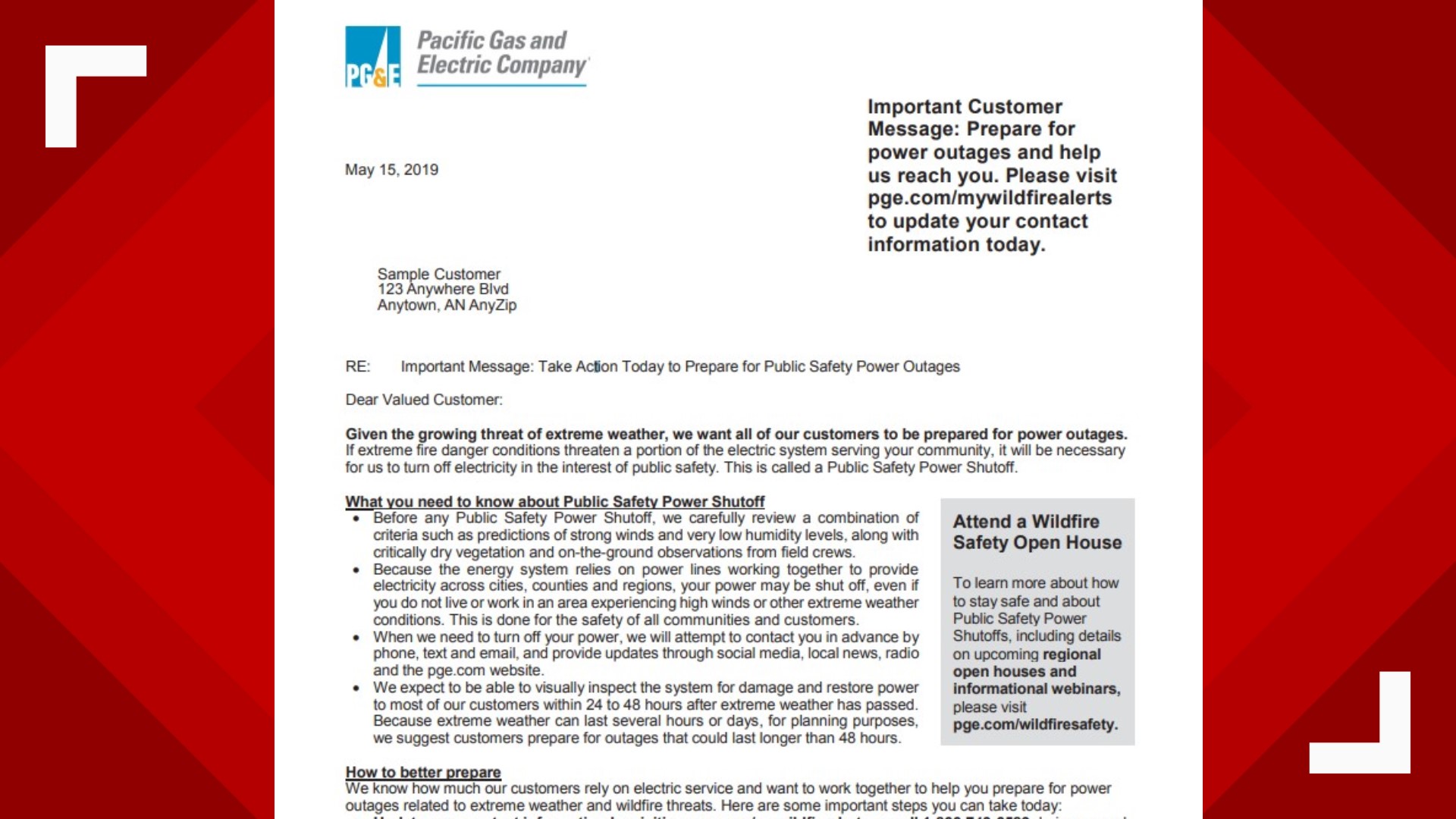 MANTECA, Calif. — PG&E is alerting its electricity customers throughout Northern California this week that it could cut power for days on end in order to prevent wildfires.

That's because PG&E's infrastructure has been found to be the cause of several recent California wildfires, including last year's destructive and deadly Camp Fire.

An article from the Manteca/Ripon Bulletin spread, well, like wildfire online Wednesday. Its headline reads, "PG&E to Manteca: Prepare for power to be cut to all of city for up to 5 days."

As ABC10 is learning, this plan stretches far beyond Manteca. People from the Central Valley, Bay Area, Sacramento Area, Foothills, Northern counties and beyond are receiving a letter from PG&E this week. It says "if extreme fire danger conditions threaten a portion of the electric system serving your community, it will be necessary for us to turn off electricity in the interest of public safety."

When conditions are favorable for fires in an area, PG&E may cut power to avoid that. It's part of the utility's Public Safety Power Shutoff Policies and Procedures, published this month.

Manteca's Fire Chief Kyle Shipherd told city council this week that PG&E says it could cut power to the city even if fire danger is low there.

"There could be a fire weather hazard in the foothills that would necessitate them shutting down all the power to the city of Manteca, possibly for up to five days," he said.

How could that be? PG&E says that because the power grid is so interconnected, "your power may be shut off, even if you do not live or work in an area experiencing high winds or other extreme weather conditions."

PG&E told Manteca that if its new plan had been in effect during the last three years, the city would have lost power a total of three times.

ABC10 asked people on Facebook: Have you received this letter? What do you think?

Jan in Calaveras County said, "I'm fine with it."

Deb in West Sacramento got a letter and said, "although going without electricity will be inconvenient for me personally, it could be detrimental to those with medical equipment needs."

Raelyn said, "Nice to see they are trying to avoid another catastrophe. Sounds like residents may want to invest in generators."

Brenda, however, said, "not everyone can afford a generator."

So, what about people who depend on power for their medical needs? PG&E recommends a generator or "consider if there is a friend or family member they can stay with during an outage."

The goal, PG&E says, is to warn people 48 hours, 24 hours and then immediately before the outage.

Many people on Facebook said that's still not reassuring for people who are medically homebound and reliant on electricity, without somewhere to go and stay.

Meanwhile, the cities getting these notices are scrambling to come up with a plan to keep people safe in case power does get cut for days at a time.

Manteca, for example, plans to offer emergency charging stations throughout the city, but only for medical devices. People looking to charge their mobile phones will have to find another source.

PG&E's plan is HERE. The letter it's sending customers is HERE.