PG&E pleaded guilty to the felony killing of 84 people and negotiated down the amount it paid to victims, but kept on donating to California political campaigns. 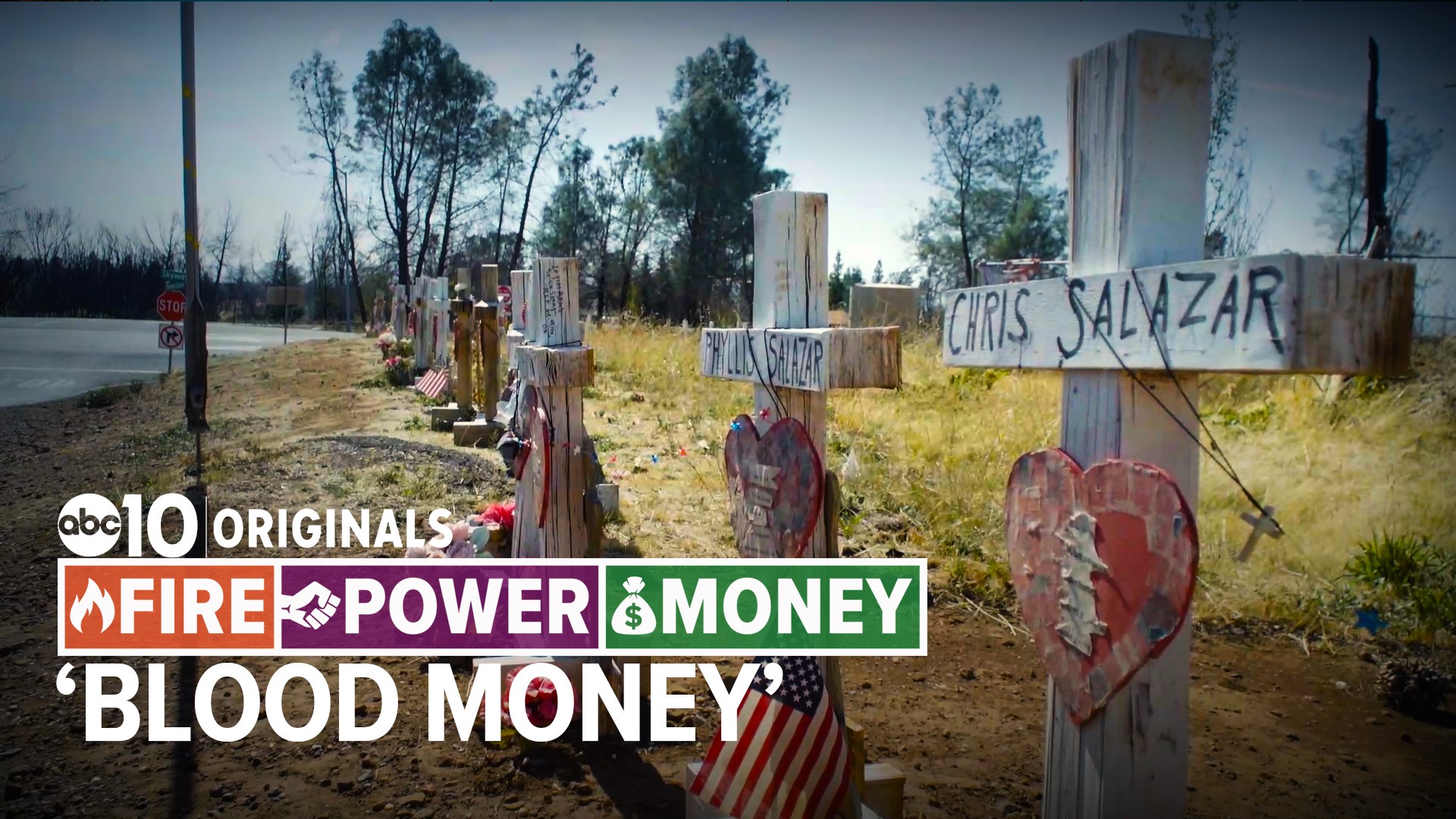 SACRAMENTO, Calif. — PG&E declared bankruptcy in 2019 because it said it didn’t have enough money to pay damages to tens of thousands of Californians for killing their loved ones, burning down their homes, and destroying their livelihoods.

Those 83,000 people had to settle for being paid partly in shares of PG&E stock because the company said it didn't have enough cash to pay them.

Despite this, PG&E found millions last year to spend on what was apparently a higher priority: influencing California politics.

Politicians and campaigns took a total of $2.1 million from PG&E, according to ABC10’s analysis of state campaign finance data, both during the company’s bankruptcy and after it pleaded guilty to 85 more felonies. The company’s 2020 political donations went to current California officeholders, political party organizations, and campaigns for ballot propositions.

“The money they’re taking is blood money,” said Phillip Binstock, whose father Julian was killed by PG&E in the Camp Fire. “They’re just as guilty as PG&E is.”

PG&E committed 84 felony counts of manslaughter and another felony for sparking the 2018 fire that destroyed the town of Paradise, pleading guilty last June.

A few months after those convictions, 17 current members of the California legislature benefited from PG&E donations to their races. Only two responded to ABC10’s requests for comment on this story.

The company’s 2020 donations break down into two categories, both of which raise tough questions for PG&E and the campaigns that accepted the funds.

In the first half of the year, when PG&E donated about a third of the money, the company was still under chapter 11 bankruptcy protection.

The rest of the donations were accepted in the months after PG&E admitted its guilt in the deadliest homicide crime ever committed by a company on U.S. soil.

‘DON’T TELL ME YOUR VALUES, SHOW ME YOUR BUDGET’

The PG&E donations covered in this story all came from the corporation’s own funds and could have been spent on other priorities if the company had desired.

Like the money that PG&E donated as a convicted felon to Gov. Gavin Newsom and a supermajority of the legislature in 2018, the company’s 2020 donations were not illegal.

They do raise ethical questions because PG&E holds a state-granted monopoly over 16 million Californians, a population greater than the cities of New York, Los Angeles, and Chicago combined.

“There’s an old adage, which is, ‘don’t tell me your values, show me your budget,’” said 2017 wildfire survivor Will Abrams, who has tried to get PG&E to be more open about its wildfire problems.

PG&E responded to a list of specific questions about its political donations with a statement it has sent multiple times over the past two years.

"Like many individuals and businesses, PG&E participates in the political process," PG&E wrote, while pointing to money it is spending on upgrades to its power grid.

In 2019, PG&E told U.S. District Judge William Alsup, who oversees the company’s punishment for felonies in the deadly San Bruno gas explosion, that “PG&E does not believe the contributions [to campaigns in the 2018 election] were more important than utility operations, including equipment maintenance or vegetation management.”

PG&E declined to tell ABC10 what’s changed since they gave that response to Alsup, who had demanded answers on the issue but stopped short of prohibiting PG&E from making campaign donations.

RELATED: 'PG&E has been a terror...to the people of California' judge says during probation hearing

The company’s spending on wildfire safety is under scrutiny as prosecutors in Sonoma and Shasta counties continue to investigate PG&E for possible criminal charges for the 2019 Kincade and 2020 Zogg fires.

More homicide charges against PG&E are possible in Shasta County, prosecutors there say, because the Zogg Fire killed four people who tried to run from the flames.

The $2.1 million PG&E spent on politics could have paid to cut and trim more trees, like the one that a federal judge said PG&E failed to cut before it fell on a PG&E power line, sparking the Zogg Fire.

The amount PG&E spent on politics was enough to purchase 1,750 more heavy-duty wind monitors to help improve PG&E’s so-called “public safety” shutoffs, which failed to de-energize the line suspected of sparking the fire that day.

Of the 17 state lawmakers who benefited from PG&E’s donations, six represent districts in PG&E territory.

Sen. Dave Cortese, whose candidacy received the biggest boost from PG&E donations, said he “had no knowledge” of the $75,000 PG&E spent to help him win and that he was “shocked” PG&E donated it.

The amount is greater than the legal limit for direct donations to official candidate campaigns. PG&E gave the funds instead to a political action group created in his name: “Valley Neighborhoods United for Dave Cortese for State Senate 2020.”

Campaigns are not allowed to direct the spending of independent expenditure groups, but candidates are free to denounce contributions that were made for their benefit.

“Obviously I cannot return that which I’ve never received,” Cortese wrote in a statement, referring to that Valley Neighborhoods United for Dave Cortese is not controlled by his campaign.

Cortese said that he once added his name to backers of a letter seeking to convert PG&E to a customer-owned business model. Cortese's name doesn’t appear on the letter itself, but rather a spreadsheet list of officials who endorsed it.

PG&E did not answer when asked why it spent so much to specifically help Cortese in his race.

WHO’S KEEPING THE MONEY? WHO’S NOT?

The other 16 members of the legislature received PG&E money directly, as contributions from the company to their official campaigns.

We contacted all of them, but only one responded.

"In October, an unsolicited contribution from PG&E was received and it has since been returned," said Atkins spokesperson Steven Barkan in an email statement.

Atkins’ office did not respond when we asked for evidence of the refund, which was not yet posted to the state campaign finance database.

Sen. Glazer returned part of the PG&E donations sent to him in the 2018 campaign cycle. He did not reply to our questions asking why he took the company’s donation in 2020 after PG&E was convicted of 84 felony manslaughters.

California politicians have taken different approaches in the past when confronted about donations accepted from PG&E since the company became a convicted felon in 2016 after the San Bruno pipeline explosion.

Most politicians have declined to part ways with the money PG&E sent them.

In 2019, Gov. Gavin Newsom told ABC10 it was a “strange question” to ask whether it was right for him to accept more than $200,000 in support from PG&E as he negotiated policies to address the company’s crisis.

A handful of politicians, most notably U.S. House Speaker Nancy Pelosi, have decided to either donate to charity or return the funds.

Since the Camp Fire, the PAC’s money has been accepted by Rep. Doug LaMalfa, the Republican congressman who represents Paradise. He’s declined to be interviewed about the donation.

PG&E money made its way to many more politicians indirectly through donations the company made to political parties and spending groups.

The biggest of these donations was to a group called the “California Labor and Business Alliance,” which PG&E funded with $500,000 of company money. Half was given during PG&E’s bankruptcy and the other half was given after the Camp Fire convictions.

Only the oil giant Chevron was a bigger contributor, giving $600,000 to the group, which campaigned in seven state legislative races in both the primary and general 2020 elections.

PG&E also gave hundreds of thousands of dollars to ballot question campaigns, including $250,000 to the yes campaign for Prop 16, which would have legalized affirmative action. Voters rejected Prop 16 in November.

PG&E wouldn’t say why it spent so much money on the issue.

The company, while bankrupt, also donated $60,000 to the Yes on 13 campaign to support a statewide school bond spending measure. Voters rejected the question in the primary.

The California Democratic Party didn't receive any money directly in 2020.

ANOTHER TRY AT A BAN

Assemblymember Kevin Kiley (R - Rocklin) has reintroduced a bill that would ban investor-owned utilities from donating to political campaigns.

“[PG&E has] used their war chest to elected politicians who will do their bidding,” Kiley said. “When you look at a utility like PG&E, this is essentially an arm of the state in a lot of ways.”

This year’s AB 871 is eligible for a hearing starting in late March.

Despite securing bipartisan sponsorship in 2020, the proposal failed to get a hearing in the state legislature where eight out of every ten members had accepted donations from PG&E.