With the presidential election less than two months away, critics believe Newsom's ban on gas powered cars might be an obstacle for Joe Biden. 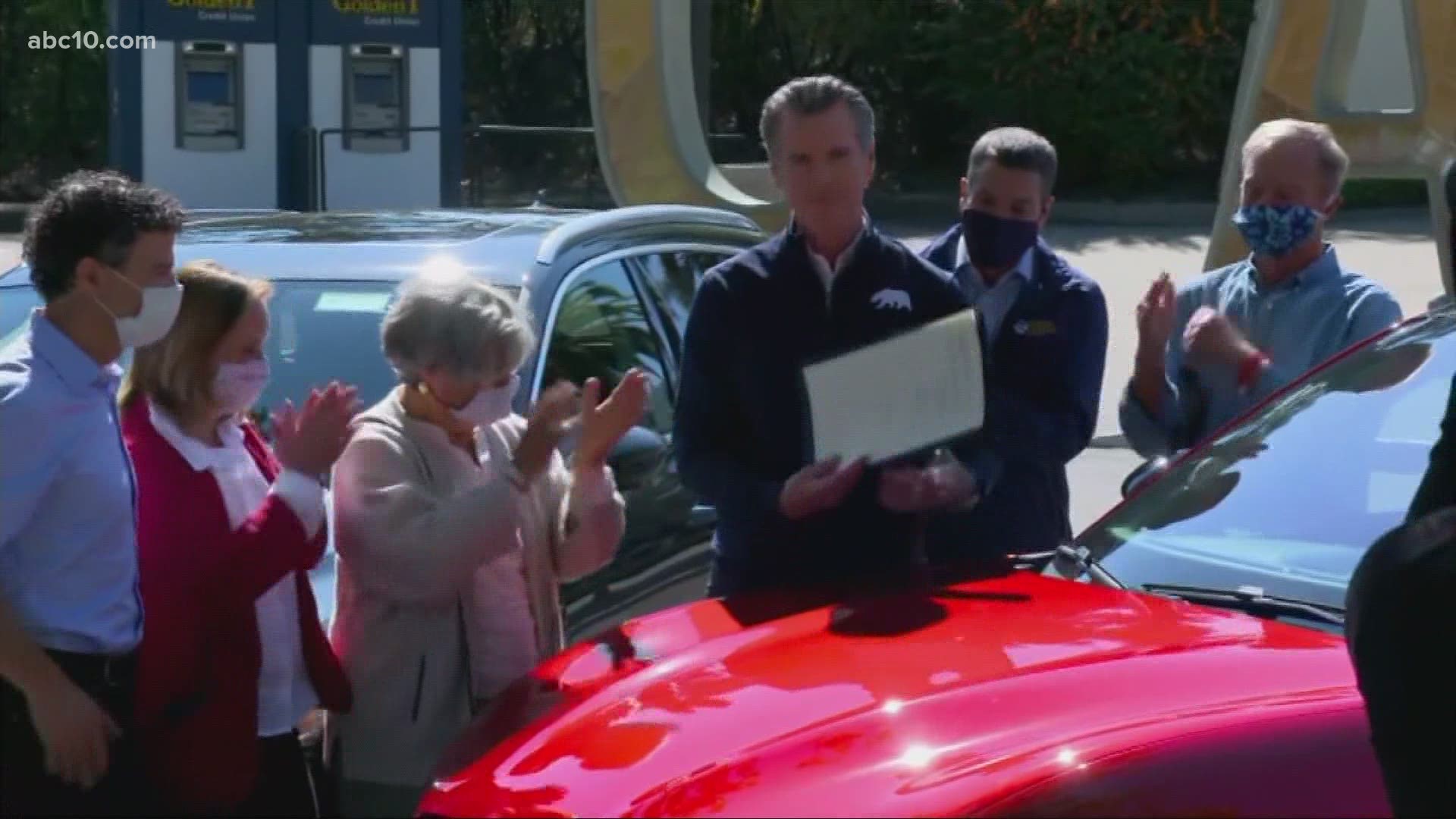 SACRAMENTO, Calif. — Yesterday Gov. Gavin Newsom leaned over the hood of an electric car and signed an executive order to phase out new gas-powered vehicles in California by 2035 and halt new fracking projects by 2024.

It was exactly the kind of “big, hairy, audacious” move that Newsom has made his calling card: one guaranteed to generate media buzz, stake out an ideological claim and force a national conversation.

Longtime political observers noted the déjà vu: In 2004, Newsom, then mayor of San Francisco, cast both caution and the law to the wind and ordered the county clerk to begin issuing marriage licenses to same-sex couples.

The majority of both American voters and the U.S. Supreme Court have since agreed that Newsom was on the right side of history. But at the time, many blamed him for mashing a hot button issue — to the possible detriment of Democratic presidential nominee John Kerry’s failed bid to oust President George W. Bush later that year.

Many Democratic strategists applauded Newsom’s latest big move yesterday. But the presidential election is now less than two months away, a prominent Californian is also on the ticket in vice presidential nominee Sen. Kamala Harris, President Donald Trump is repeatedly citing California as a cautionary tale of out-of-control nanny statism, and the first presidential debate is Tuesday in Ohio, a state whose economy is partially dependent on vehicle manufacturing. That has all left some questioning the political wisdom of Newsom’s timing.

Reading the news yesterday afternoon, Mike Madrid, a Republican political consultant and a co-founder of the viral-tweeting fiercely anti-Trump political action committee, the Lincoln Project, had a familiar, sinking feeling: Not this again.

“Gavin jumped out on gay marriage and killed (Democratic presidential nominee John Kerry) in the Midwestern states,” he said.

Looks like @GavinNewsom is trying to torpedo @JoeBiden @KamalaHarris. Why announce banning sales of gas-powered cars in California less than a week before the 1st presidential debate in one of the largest vehicle production state in the country - OHIO? pic.twitter.com/BZGepgEISQ

But Andrew Feldman, a frequent consultant for organized labor and progressive get-out-the-vote efforts, said most Americans already see California as out ahead of the rest of both the Democratic Party and the country on environmental issues and are not likely to conflate Newsom with Biden.

“This seems to be on par for the state in its push to be a leader on this effort,” he said.

“I don’t think most people in Pennsylvania know who Newsom is,” added Ed Mitchell, a longtime political consultant from the state. And although fracking is a key industry in the state’s Republican Northern Tier and southwest, it’s a big diverse place. “People are buying hybrid cars and electric cars out here too.”

“It’s kind of a bank shot to try to say ‘vote against Biden because Newsom did this in California,’” said Bob Shrum, a former Democratic political operative now at the University of Southern California.

Not that the president isn’t likely to try.

Alongside the false claim about Biden on fracking, the president and his surrogates have said, incorrectly, that the former vice president plans to defund the nation’s police departments and abolish the suburbs, and made the unfounded assertion that he is taking performance-enhancing drugs.

“They just lack credibility,” said Carrick. Will Trump accuse Biden of wanting to confiscate your car? “The truth is they would say that anyway.”

In the meantime, Newsom took the opportunity yesterday afternoon to send out an email trumpeting the decision — and to ask for contributions to his 2022 re-election campaign.

WATCH MORE: Election 2020: How to make sure your ballot is counted in California