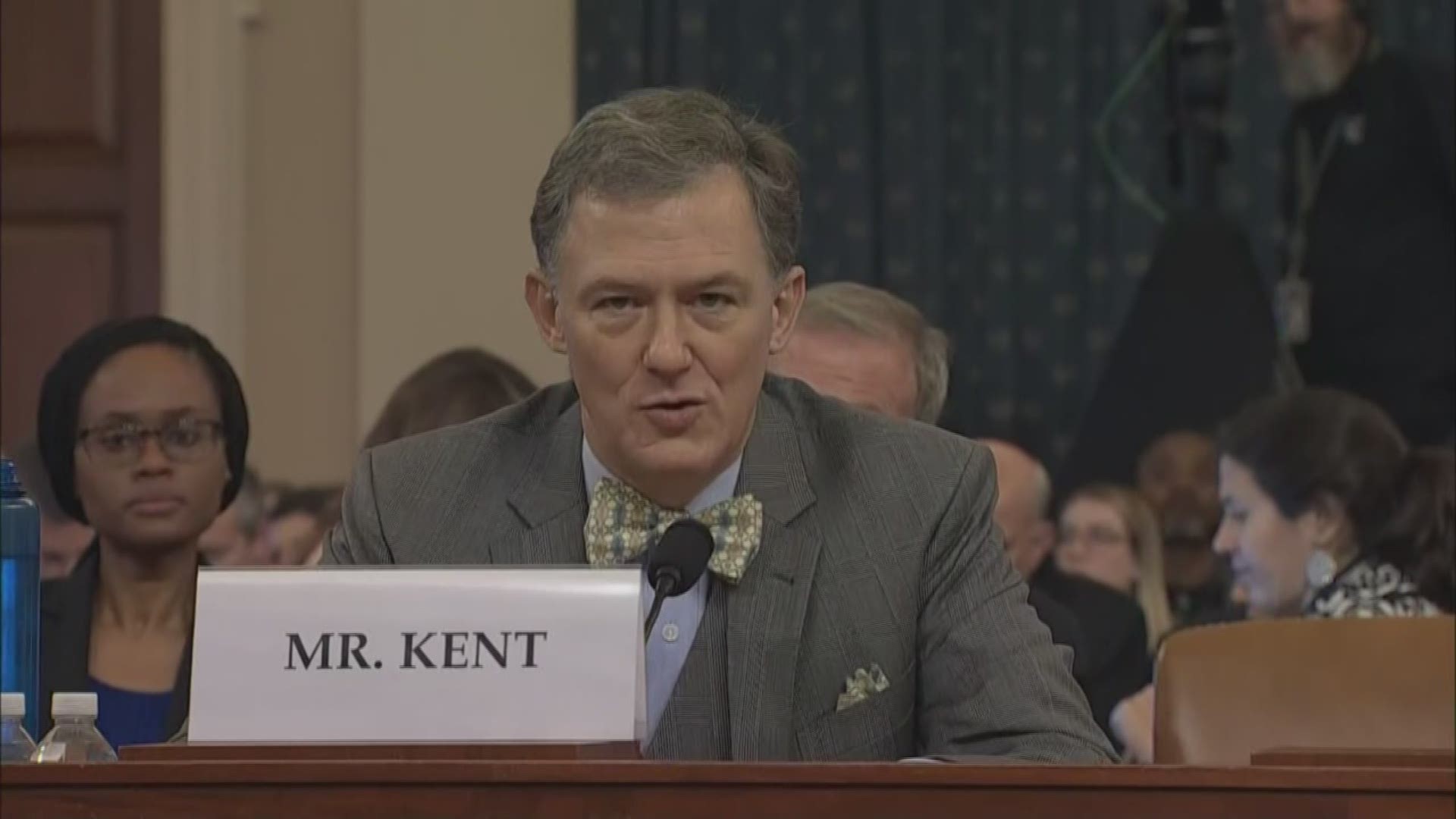 WASHINGTON — Democratic House Speaker Nancy Pelosi invited President Donald Trump to testify in front of investigators in the House impeachment inquiry ahead of a week that will see several key witnesses appear publicly.

Pushing back against accusations from the president that the process has been stacked against him, Pelosi said Trump is welcome to appear or answer questions in writing, if he chooses.

“If he has information that is exculpatory, that means ex, taking away, culpable, blame, then we look forward to seeing it,” she said in an interview that aired Sunday on CBS’s "Face the Nation.” Trump “could come right before the committee and talk, speak all the truth that he wants if he wants,” she said.

The comments come as the House Intelligence Committee prepares for a second week of public hearings as part of its inquiry, including with the man who is arguably the most important witness. Gordon Sondland, Trump’s ambassador to the European Union, is among the only people interviewed to date who had direct conversations with the president about the situation because the White House has blocked others from cooperating with what they dismiss as a sham investigation. And testimony suggests he was intimately involved in discussions that are at the heart of the investigation into whether Trump held up U.S. military aid to Ukraine to try to pressure the county’s president to announce an investigation into Democrats, including former Vice President Joe Biden, a leading 2020 candidate, and his son, Hunter.

Multiple witnesses overheard a phone call in which Trump and Sondland reportedly discussed efforts to push for the investigations. In private testimony to impeachment investigators made public Saturday, Tim Morrison, a former National Security Council aide and longtime Republican defense hawk, said Sondland told him he was discussing Ukraine matters directly with Trump.

Morrison said Sondland and Trump had spoken approximately five times between July 15 and Sept. 11 — the weeks that $391 million in U.S. assistance was withheld from Ukraine before it was released.

And he recounted that Sondland told a top Ukrainian official in a meeting that the vital U.S. military assistance might be freed up if the country’s top prosecutor “would go to the mike and announce that he was opening the Burisma investigation.” Burisma is the gas company that hired Hunter Biden.

Morrison’s testimony contradicted much of what Sondland told congressional investigators during his own closed-door deposition, which the ambassador later amended.

Trump has said he has no recollection of the overheard call and has suggested he barely knew Sondland, a wealthy donor to his 2016 campaign. But Democrats are hoping he sheds new light on the discussions.

“I’m not going to try to prejudge his testimony,” Rep. Jim Himes, D-Conn., said on “Fox News Sunday.” But he suggested, “it was not lost on Ambassador Sondland what happened to the president’s close associate Roger Stone for lying to Congress, to Michael Cohen for lying to Congress. My guess is that Ambassador Sondland is going to do his level best to tell the truth, because otherwise he may have a very unpleasant legal future in front of him.”

The committee will also be interviewing a long list of others. On Tuesday, they’ll hear from Morrison along with Jennifer Williams, an aide to Vice President Mike Pence, Alexander Vindman, the director for European affairs at the National Security Council, and Kurt Volker, the former U.S. special envoy to Ukraine.

On Wednesday the committee will hear from Sondland in addition to Laura Cooper, a deputy assistant secretary of defense, and David Hale, a State Department official. And on Thursday, Fiona Hill, a former top NSC staffer for Europe and Russia, will appear.

Trump, meanwhile, continued to tweet and retweet a steady stream of commentary from supporters as he bashed “The Crazed, Do Nothing Democrats” for “turning Impeachment into a routine partisan weapon.”

“That is very bad for our Country, and not what the Founders had in mind!!!!” he wrote.

He also tweeted a doctored video exchange between Rep. Adam Schiff, the Democratic chairman of the Intelligence Committee, and Republican Rep. Jim Jordan, in which Schiff said he did not know the identity of the whistleblower whose complaint triggered the inquiry. The clip has been altered to show Schiff wearing a referee’s uniform and loudly blowing a whistle.

In her CBS interview, Pelosi vowed to protect the whistleblower, whom Trump has said should be forced to come forward despite longstanding whistleblower protections.

“I will make sure he does not intimidate the whistleblower,” Pelosi said.

RELATED: What does it take to impeach the President of the United States?

Trump has been under fire for his treatment of one of the witnesses, the former ambassador to Ukraine, Marie Yovanovitch, whom Trump criticized by tweet as she was testifying last week.

That attack prompted accusations of witness intimidation from Democrats and even some criticism from Republicans, who have been largely united in their defense of Trump

“I think, along with most people, I find the president’s tweet generally unfortunate,” said Ohio Republican Rep. Mike Turner on CNN’s “State of the Union.”

Rep. Chris Stewart, R-Utah, said Trump “communicates in ways that sometimes I wouldn’t,” but dismissed the significance of the attacks.

“If your basis for impeachment is going to include a tweet, that shows how weak the evidence for that impeachment is,” he said on ABC’s “This Week.”

And the backlash didn’t stop Trump from lashing out at yet another witness, this time Pence aide Williams. He directed her in a Sunday tweet to “meet with the other Never Trumpers, who I don’t know & mostly never even heard of, & work out a better presidential attack!”