Garland appeared before the Senate Judiciary Committee and faced questions about his plans to handle specific investigations and politically sensitive cases. 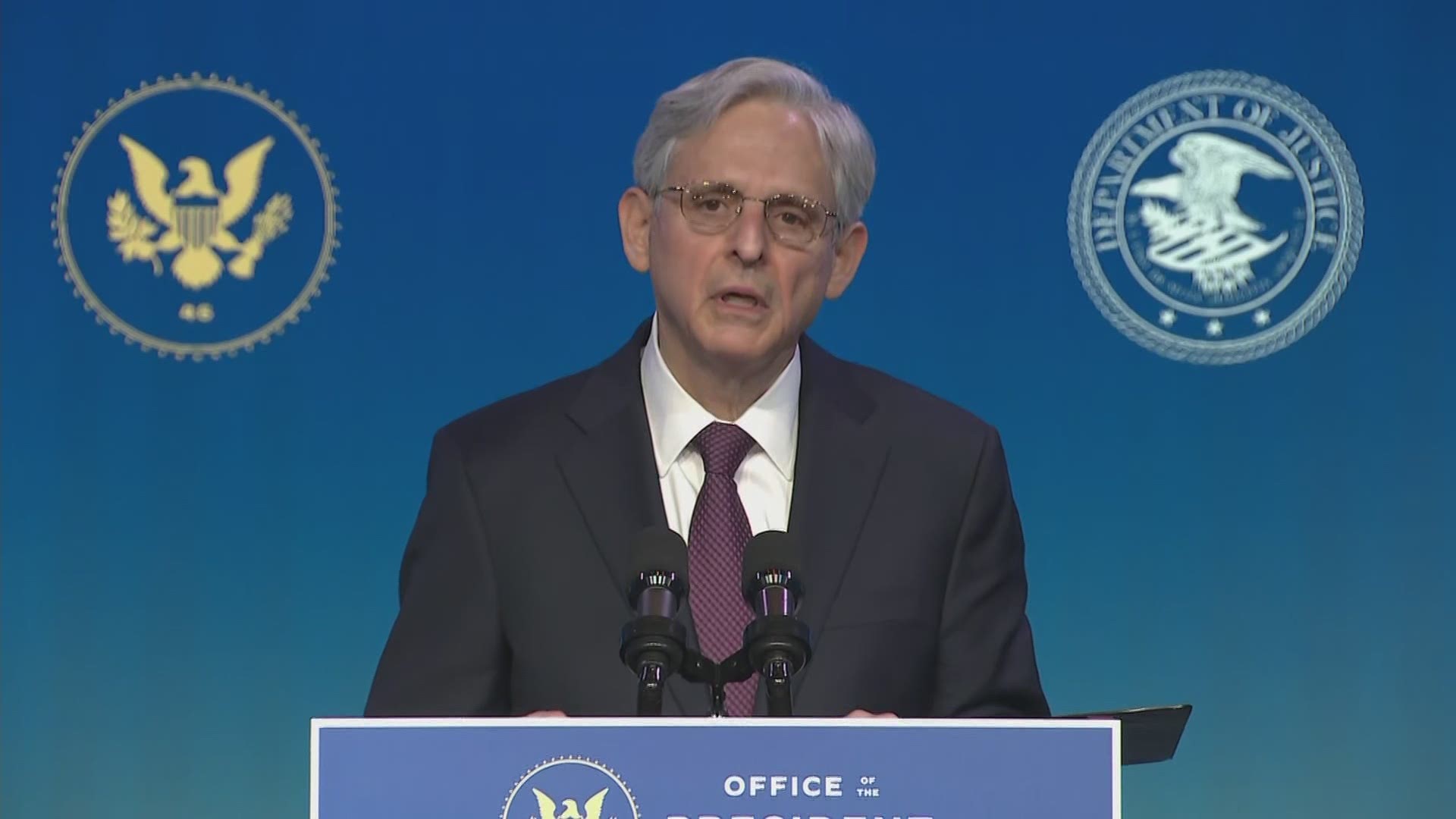 WASHINGTON — Editor's note: The video above is from Jan. 7, 2021, before the presidential inauguration.

Merrick Garland, President Joe Biden's attorney general nominee, vowed Monday to prioritize combating extremist violence and said his first focus would be on the insurrection at the U.S. Capitol as he sought to assure lawmakers that the Justice Department would remain politically independent on his watch.

A federal appeals court judge who was snubbed by Republicans for a seat on the Supreme Court in 2016, Garland appeared Monday before the Senate Judiciary Committee and is widely expected to sail through his confirmation process with bipartisan support.

“The attorney general represents the public interest, particularly and specifically as defined by the Constitution and the statutes of the United States,” Garland said. “I do not plan to be interfered with by anyone."

Garland will inherit a Justice Department that endured a tumultuous era under Trump — rife with political drama and controversial decisions — and that faced abundant criticism from Democrats over what they saw as the politicizing of the nation’s top law enforcement agencies.

“I have grown pretty immune to any kind of pressure, other than the pressure to do what I think is the right thing, given the facts and the law. That is what I intend to do as the attorney general, I don’t care who pressures me in whatever direction,” he said.

Early in the hearing, Garland faced questioning about his plans to handle specific investigations and politically sensitive cases, like the federal tax investigation involving Biden’s son Hunter Biden, and the special counsel’s inquiry started by William Barr, while he was attorney general, into the origins of the Trump-Russia investigation, which also remains open.

Garland said he had not spoken with Biden about the investigation into his son. He said he had agreed to the nomination as attorney general because the president had vowed that “decisions about investigations and prosecutions will be left to the Justice Department.”

If media reports are accurate, I believe Judge Garland would be a sound choice to be the next Attorney General. He is a man of great character, integrity, and tremendous competency in the law.https://t.co/7aLuTdCqXA

Garland, though saying he was supportive of transparency and in publicly explaining Justice Department decision-making, declined to commit to making public the results of the Durham investigation. He said under questioning from Sen. Chuck Grassley, the committee’s top Republican, that he had not spoken to Durham yet but had no reason to think that former Attorney General William Barr’s decision to give Durham special counsel status to remain in his position was “not the correct decision.”

To date, Durham has interviewed officials from the FBI, Justice Department and the CIA regarding the early days of the Russia investigation, and has produced criminal charges against just one person — a former FBI lawyer who pleaded guilty to altering an email. Garland said “there were certainly serious problems” with applications for surveillance during the FBI’s Russia investigation, and that he intended as attorney general to speak more deeply about the issue with the Justice Department’s inspector general and with the FBI director

“I am always concerned and have always been concerned that we be very careful about FISA,” Garland said, using the acronym for the Foreign Intelligence Surveillance Act.

Garland’s failed nomination to the Supreme Court wasn’t far from lawmakers minds’, with the bitter partisan feelings over the 2016 confirmation battle apparent in the hearing room. Sen. Chuck Grassley, who was chairman of the panel at the time and carried out GOP leader Mitch McConnell’s directive to block Garland from the court, defended his role, saying he took a position and “stuck to it.” He then criticized Democrats over their handling of Justice Brett Kavanaugh’s confirmation.

Still, he indicated he would be supportive of Garland.

“I admire Judge Garland’s public service,” Grassley said. “Just because I disagreed with anyone being nominated didn’t mean that I had to be disagreeable to that nominee.”

Garland said his first briefing as attorney general would be focused on the insurrection at the U.S. Capitol on Jan. 6 and promised to provide prosecutors with whatever resources they need to bring charges in the cases.

“I will supervise the prosecution of white supremacists and others who stormed the Capitol on January 6 — a heinous attack that sought to disrupt a cornerstone of our democracy: the peaceful transfer of power to a newly elected government,” Garland said in his opening statement.

In his prepared remarks, Garland focused on prioritizing policing and civil rights to combat racial discrimination — he says America doesn’t “yet have equal justice” — as well as confronting the rise in extremist violence and domestic terror threats and restoring the department’s political independence after years of controversial decisions and turmoil.

“Communities of color and other minorities still face discrimination in housing, education, employment, and the criminal justice system; and bear the brunt of the harm caused by pandemic, pollution, and climate change,” Garland said.

As civil rights groups and activists push Biden, a death penalty foe, to take immediate action to halt federal executions after an unprecedented run of capital punishment during the Trump administration, Garland described his reservation about the death penalty and its impact.

Garland is an experienced judge who held senior positions at the Justice Department decades ago, including as a supervisor in the prosecution of the 1995 Oklahoma City bombing, which led to the execution of Timothy McVeigh. But he is set to return to a department that is radically different from the one he left. His experience prosecuting domestic terrorism cases could prove exceptionally handy.

“I come from a family where my grandparents fled antisemitism and persecution. The country took us in, and protected us, and I feel an obligation to the country to pay back, and this is the highest best use of my own set of skills to pay back," Garland said. "So I very much want to be the kind of attorney general that you’re saying I could become, and I’ll do my best to become that kind of attorney general.”

His nomination has gained public support on both sides of the political aisle, from more than 150 former Justice Department officials — including former attorneys general Loretta Lynch, Michael Mukasey and Alberto Gonzales, along with 61 former federal judges. Others, including two sons of former Attorney General Edward Levi, have also written letters of support to Congress.

“There have been few moments in history where the role of attorney general — and the occupant of that post — have mattered more,” the committee’s chairman, Sen. Dick Durbin, D-Ill., said.