What Kamala Harris quitting the presidential race means for California

Harris announced that she was throwing in the towel, leaving a field of 15 Democratic candidates — many of whom are still polling below her. 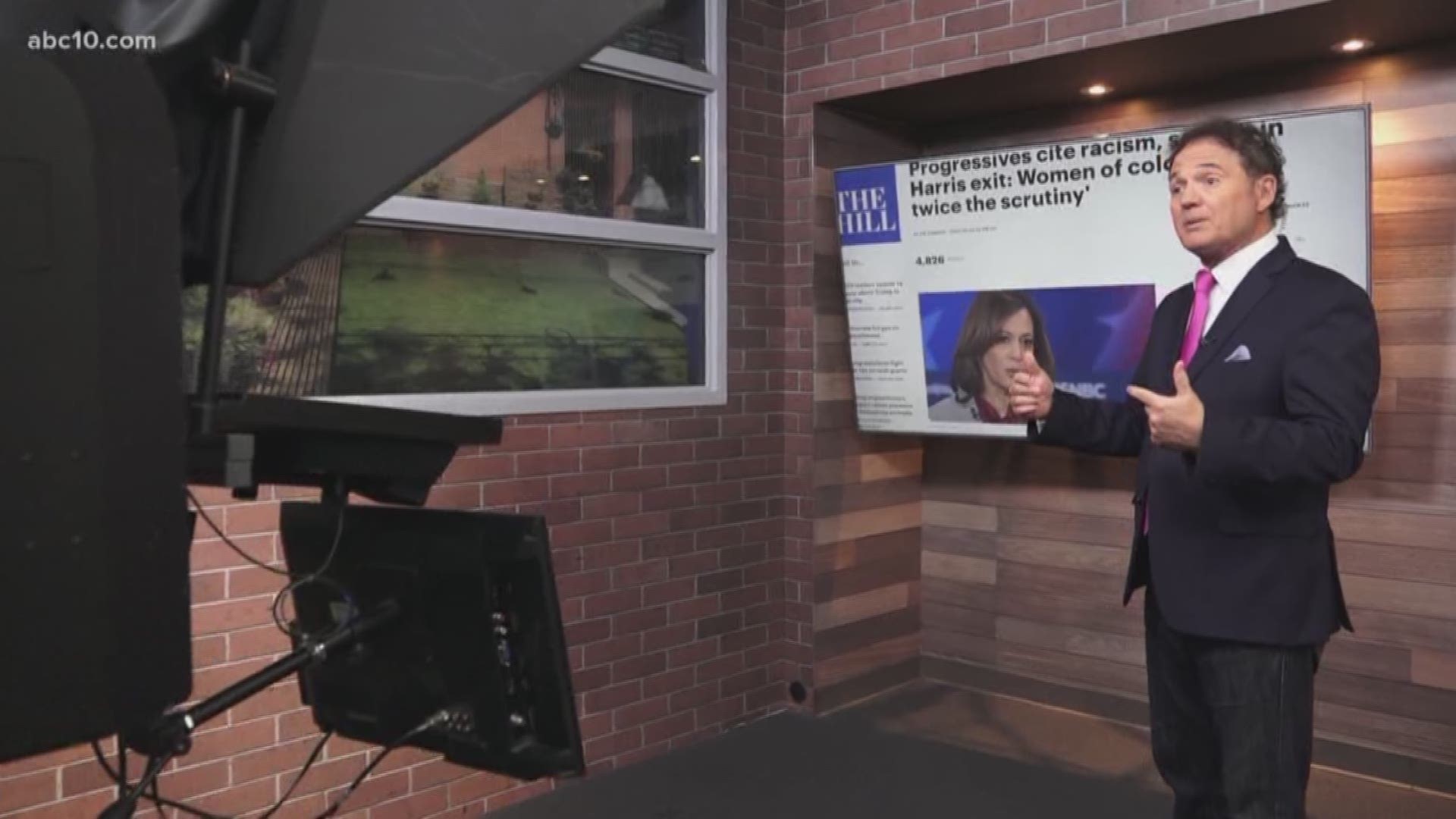 SACRAMENTO, Calif. — California Sen. Kamala Harris seemed all but destined to be a front-runner when she launched her Democratic presidential campaign before a cheering throng of 20,000 supporters in downtown Oakland last January. A prosecutor to take down Trump, a black woman in a party disproportionately made up of black women, a U.S. Senator from the country’s largest state — on paper, she looked formidable.

This was before former Vice President Joe Biden entered the race. Before Mayor Pete and Elizabeth Warren rocketed to the top tier. Before Harris proclaimed that she was “moving to Iowa” (expletive deleted) and before the campaign adopted and then discarded a handful of ill fitting slogans (“Dude gotta go.”) Before the campaign’s internal drama found its way into Politico and The New York Times, which last week headlined its story “How Kamala Harris’s campaign unraveled.”

This morning, Harris announced that she was throwing in the towel, leaving a field of 15 Democratic candidates — many of whom are still polling below her. Her “political pragmatist” label failed to resonate with the mood of her party’s electorate, and calling herself a “progressive prosecutor” served to dredge up questions about just how progressive she really was as San Francisco’s district attorney or California’s attorney general.

But according to Harris, it simply came down to money.

“I’m not a billionaire. I can’t fund my own campaign. And as the campaign has gone on, it’s become harder and harder to raise the money we need to compete,” she said in a press release this morning — a final dig at Tom Steyer, Michael Bloomberg and John Delaney, three billionaires who remain in the field.

Harris’ decision to drop out two months before the Iowa Caucus isn’t just a national story. It’s also a California one. Her Senate term extends through 2022, assuming she isn’t tapped for a vice presidential slot or potential Cabinet position in a Democratic presidential administration. It’s unclear how appealing that would be to her; what is clear is that she is ambitious and has plenty of years to try for higher office again.

Our votes, cash and endorsements now up for grabs

If polls are anything to go by, Harris’ sudden departure from the race is probably good news for Warren, senator from Massachusetts.

But the race is still so “neck and neck and neck,” said Paul Mitchell of Political Data Inc., who conducted the poll, that the distribution of Harris’ relatively small share of the electorate in California isn’t likely to crown any one candidate the clear frontrunner. It could provide a bit of leverage for Vermont Sen. Bernie Sanders, who has prioritized vote mobilization in California and now boasts 80 in-state staffers, as well as Bloomberg, the former mayor of New York who is skipping the early states entirely and instead plowing millions of dollars in advertising into California and other states that vote on March 3.

Where Harris had a more commanding presence in her home state was in endorsements and big money fundraising.

Despite months of lackluster polling, Harris was still the top beneficiary of large dollar donors (those who give more than $200 per year) in California this year. In 2019, according to the most recently available filings, she raised more than $11.5 million from the Golden State’s donor class.

California donors played a major role in the campaign this year precisely because “they didn’t coalesce around Harris as a favorite daughter and instead provided millions to keep other candidates viable,” said Rose Kapolczynski, a Democratic political consultant.

Harris also earned most of the state’s high profile endorsements — including Gov. Gavin Newsom, Assembly Speaker Anthony Rendon and President Pro Tem Toni Atkins. Just yesterday, Newsom’s office had announced that he would jet to Iowa in mid-December to campaign on behalf of Harris; the two former San Franciscans have been described as political siblings. As for what his next move might be, the governor has not responded to requests for comment. He did tweet props to Harris:

Bob Mulholland, a Democratic National Committee delegate from Chico who had endorsed Harris, said he did not expect the freed-up endorsees to consolidate around one candidate. Untethered from Harris, there is no consensus second choice, he said. “Many will hold off to determine if anyone else is dropping out.”

When state lawmakers decided to bump up California’s primary election to March 3, it was with the hope that the nation’s largest state would play a more decisive role in choosing presidential nominees.

March may not have been early enough to help Harris, said Corey Cook, a political scientist at St. Mary’s College.

“The thing that people didn’t understand is that with so many candidates in the field, the pre-primary was going to be so grueling that it would winnow the field a lot sooner,” he said. “My sense is that we’re going to see a few more candidates drop out before the end of the year.”

It’s not clear that an early vote from California would have helped Harris much anyway. Despite being the junior senator of the state, she was floundering in the low double digits here — only a few points higher than her polling in other states. According to a new survey that the Institute of Governmental Studies conducted for The Los Angeles Times, 61% of California’s likely Democratic primary voters felt that Harris should drop out.

That isn’t to say that Harris would have had no chance had she been able to hold out a bit longer, said Political Data’s Mitchell.

“In a 16-way race” polling in the high single digits “isn’t the end of the world,” said Mitchell. “I think it’s unfortunate for her and her backers that the money wasn’t there.”

Presidential candidates have until December 26 to remove their names from consideration on the California primary ballot.

Critics — both outside and inside the Harris operation — have blamed the campaign’s leadership for poor financial management. But Christine Pelosi, chair of the California Democratic Party Women’s Caucus, said critical coverage of the Harris campaign and its inability to raise enough money was in part the result of “sexism” and “misogynoir” (misogyny aimed at black women).

Reporters were writing “post-mortems before there was even a mortem,” she said. “The money was just absolutely insurmountable and you can’t raise it if people come to assume that you can’t raise it. It becomes a self-fulfilling prophecy.”

It’s not a coincidence, said Pelosi, that the six remaining candidates who have qualified for the Dec. 19 debate in Los Angeles — Joe Biden, Elizabeth Warren, Bernie Sanders, Pete Buttigieg, Amy Klobuchar and California’s Tom Steyer — are all white.

Thus, another sign that California’s impact on the primary process seems to have come up short. Regardless of California’s majority-minority population, the top tier of the Democratic candidates still looks an awful lot like Iowa and New Hampshire.

Despite her final campaign slogan of putting “justice on the ballot,” Harris never quite figured out how to convey her record as a prosecutor in California.

Just as soon as she announced her bid for the White House, she began taking flack from criminal justice advocates on the left. That began with a New York Times opinion piece by the University of San Francisco law professor Lara Bazelon — and it never really let up.

In an August CNN debate, Hawaii Rep. Tulsi Gabbard lit into Harris for her record prosecuting marijuana-related crimes, for her office’s failure to share exculpatory evidence in a handful of cases and for her defense of cash bail. Caught between two unenviable defenses of her past prosecutorial decisions — either she made those choices or she was not aware of what was happening in her own office — Harris did not address the criticisms directly.

Today President Donald Trump’s campaign wasted no time in posting kudos to outlier Gabbard, at the expense of Harris:

Nonetheless, Harris’ record was full of such choices that, whatever the motivation at the time, did not endear her to some Democratic voters. As CalMatters reported for the first time in September, Harris’ office decided to prosecute a mentally ill woman for assaulting police officers — after she was shot by those officers.

Her fate may reflect just how far the electorate has shifted on criminal justice issues in the decade and a half since Harris’ first campaign. Or it could reflect the fact that despite California’s liberal reputation, the strategy needed to successfully run for attorney general in California, which may require appeasing crime-minded moderates and police unions, is still very different from what’s needed to secure a Democratic presidential nomination.

This was a rare loss for Ace Smith and his team of Bay Area political consultants at SCRB Strategies, who have a long track record of winning state and local races in California. They’ve helped put both Govs. Jerry Brown and Newsom in Sacramento and Harris in the U.S. Senate.

The latest setback was a particularly public one. In articles in both Politico and The New York Times, Juan Rodriguez, SCRB partner and Harris’ campaign manager, was blamed by unnamed sources within the campaign for running a dysfunctional operation.

It’s also been a bad day for People Standing Strong, a California-based super PAC run by Newsom-affiliated political consultants Dan Newman and Brian Brokaw. The group was all set to begin rolling out a $1 million advertising campaign across Iowa when news of Harris’ decision broke.

“It was fairly abrupt,” said Brokaw, adding that he learned that his new ad would not be aired after all “when literally every reporter starting calling me at the same time” this morning.