Where do recall candidates stand on mask and vaccine mandates?

Several said they would reverse mandates on day one if elected. 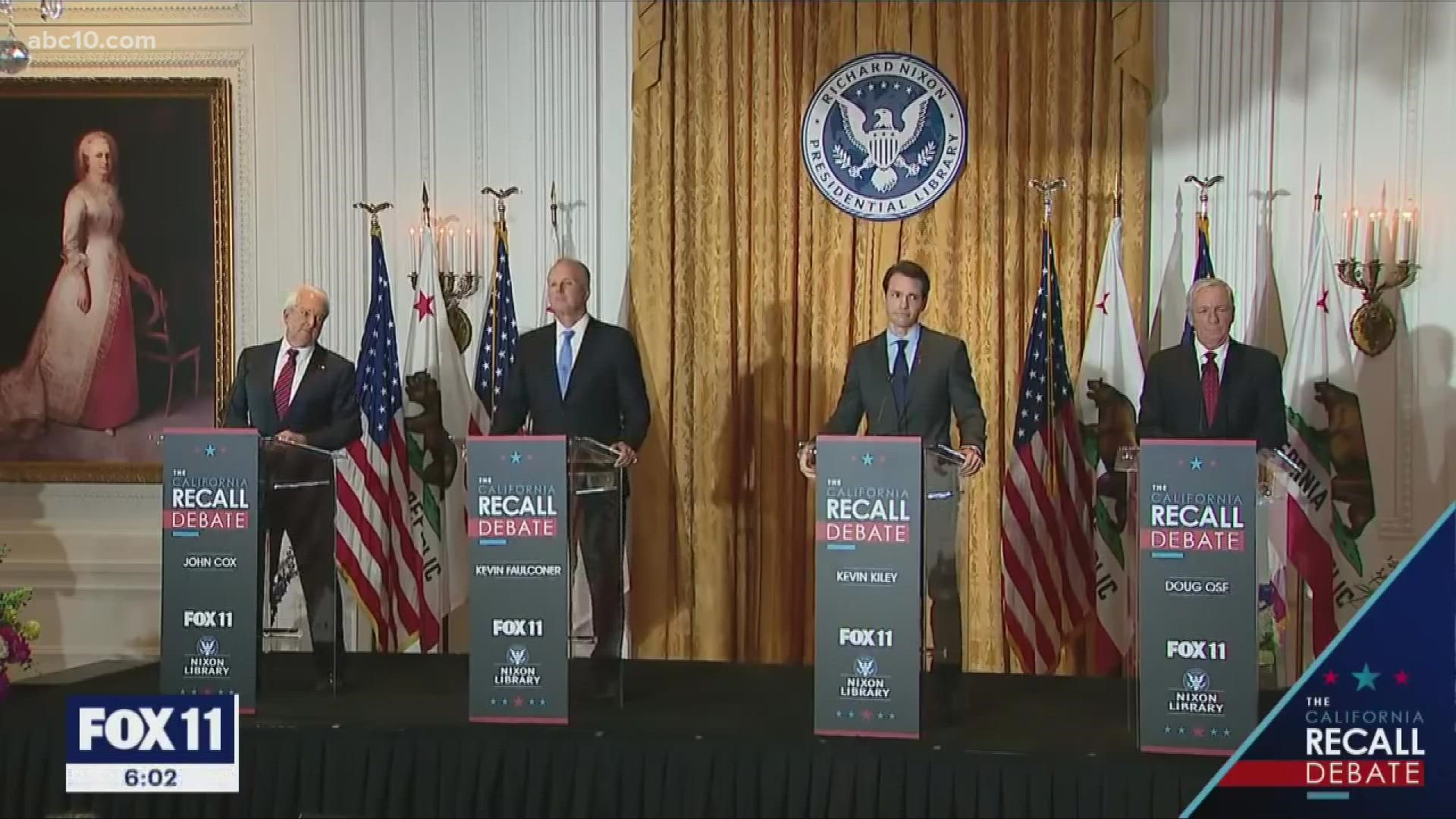 CALIFORNIA, USA — The Anti-Recall Campaign is highlighting the stark contrast between Governor Gavin Newsom's hands-on approach and those seeking to kick him out of office.

In a new ad, the campaign said conservative talk show host Larry Elder would reverse mask and vaccine mandates on day one.

Governor Gavin Newsom's stance on mandates is already well known. In California right now, all state and school employees are required to get vaccinated or undergo weekly testing.  Masks are also required in public schools.

Here is what the top contenders in the recall race have said about mandates thus far:

During the first recall debate hosted by FOX11 in LA earlier this month, Kiley said "I believe in personal choice."

"I should say that I have done everything as a member of the legislature to get information and access to my constituents." Kiley said. "That is in stark contrast to Gavin Newsom."

"I'm 100% against a mask mandate at the state level." He added, "California is only one of a handful of states that has one."

"I think the government is engaged in a significant overreach of its authority in terms of imposing these things," Ose said.

"I happen to have great faith in the ability of people to make decisions of their own," he added. "This is not the last variant that we're going to have. If we don't break this pattern of government overreach into our daily lives, then we are going to get stuck with this over and over and over."

Faulconer said during the first debate that he "strongly opposes mask mandates in public schools."

He said parents are the right ones to make choices for their kids. Faulconer said he would even consider imposing a statewide mandate to ban mandates on a local level.

Kevin Faulconer said he is vaccinated and highly encourages people to get vaccinated as well.

"I don’t think we should do mandates," Cox said. "I think the governor’s COVID management was an absolute disaster.”

Cox said during the debate that people who have had COVID-19 and have antibodies should not get vaccinated. This goes against CDC recommendations.

Caitlyn Jenner posted on social media that she highly encourages people to get vaccinated, but she is against any mandates.

Is threatening the good people of CA really the solution our leaders believe in? I believe in Californians, our right to live freely and make decisions for ourselves. https://t.co/CKvGnIb4Vy

Elder posted on social media that he would reverse vaccine and mask mandates on day one if elected governor.

Nope. When I win I will fight any and all vaccine and mask govt mandates at state and local level. https://t.co/mnvU6s5Wid https://t.co/fluI19mFtf

Democratic recall candidate Kevin Paffrath told ABC10 today he is not going to impose any mandate on a state level, but will not get in the way of local mandates.

He said the state needs to encourage education.