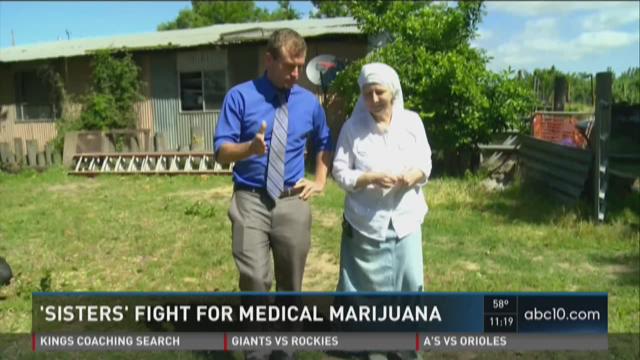 MERCED, CALIF. -- A pair of nuns are devoting their lives to a plant not normally associated with religion: marijuana.

Sister Kate and Sister Darcy are on a mission to grow pot to heal the sick. The nuns call themselves "Sister of the Valley." The two women live on a farm in the Central Valley town Merced.

Just to be clear, they are not Catholic nuns. They are self-proclaimed "spiritual nuns."

The marijuana grown on Sister Kate's farm has low levels of THC -- the primary mind-altering ingredient found in the cannabis plant. Kate says the cannabis she grows won't get you high.

Sister Kate&rsquo;s Cannabis laced oils and creams bring in around $1000 in online sales every day. The products she sells contain less than 0.3% THC making it legal to ship around the world.

"Our products have less than 0.3% THC," Kate said that low level allows her to mail her cannabis infused oils and creams all over the world. She makes a good living off her product. Kate tells ABC 10 she makes about $1,000 a day in online sales. She wants to be clear this is not a cash-only business, she works legally with banks.

Right now, Sister Kate's business is legal -- but the location of her business is in a gray area.

Packing is a two woman job. Sister Kate and Sister Darcy are having a hard time filling orders. They are not legally allowed to grow products in Merced City Limits. The sisters must buy cannabis to make their products.&nbsp;

"This is a temporary ban. We just needed to get something on the books so we could re-visit this later," Merced City Councilmember Kevin Blake said.

Merced City Council member Kevin Blake pointing out city limits. A temporary ban on medical marijuana is in place. Blake is in favor of passing laws and lifting the ban.&nbsp;

The state's new regulations had initially required local municipalities to have medical marijuana rules written by March 1. But that deadline in the new law was a mistake, according to state legislators who wrote the regulations, and it was later amended.

Blake and his fellow councilmembers said three months was not enough time to craft laws. To buy some time, Blake said the council decided to enact a temporary ban on medical marijuana. Other California cities have taken similar action.

The ban puts a lot of stress on Merced's medical marijuana community, including Sister Kate. "I really need a joint right now to calm down," Kate said after a city council meeting in April.

Public and council comments became so heated during that April meeting the police chief had to stop it and regain order. Sister Kate feels like the law making process is slow and council members are not taking medical marijuana users' needs into account.

Sister Kate and her Apprentice Sister Darcy have a hard time holding their tong at the Merced City Council meeting. The medical marijuana community and council members are having a hard time finding a common ground.

Kevin Blake along with other council member listen to public comment. The council is working to create new medical marijuana laws and lift a temporary ban on cannabis sales and cultivation.

It's not clear when medical marijuana laws will be passed in Merced. The council said it hopes to finalize an ordinance before the November elections, when legalizing recreational marijuana goes up for a vote.If passed, the city is not sure what control they will have over marijuana.