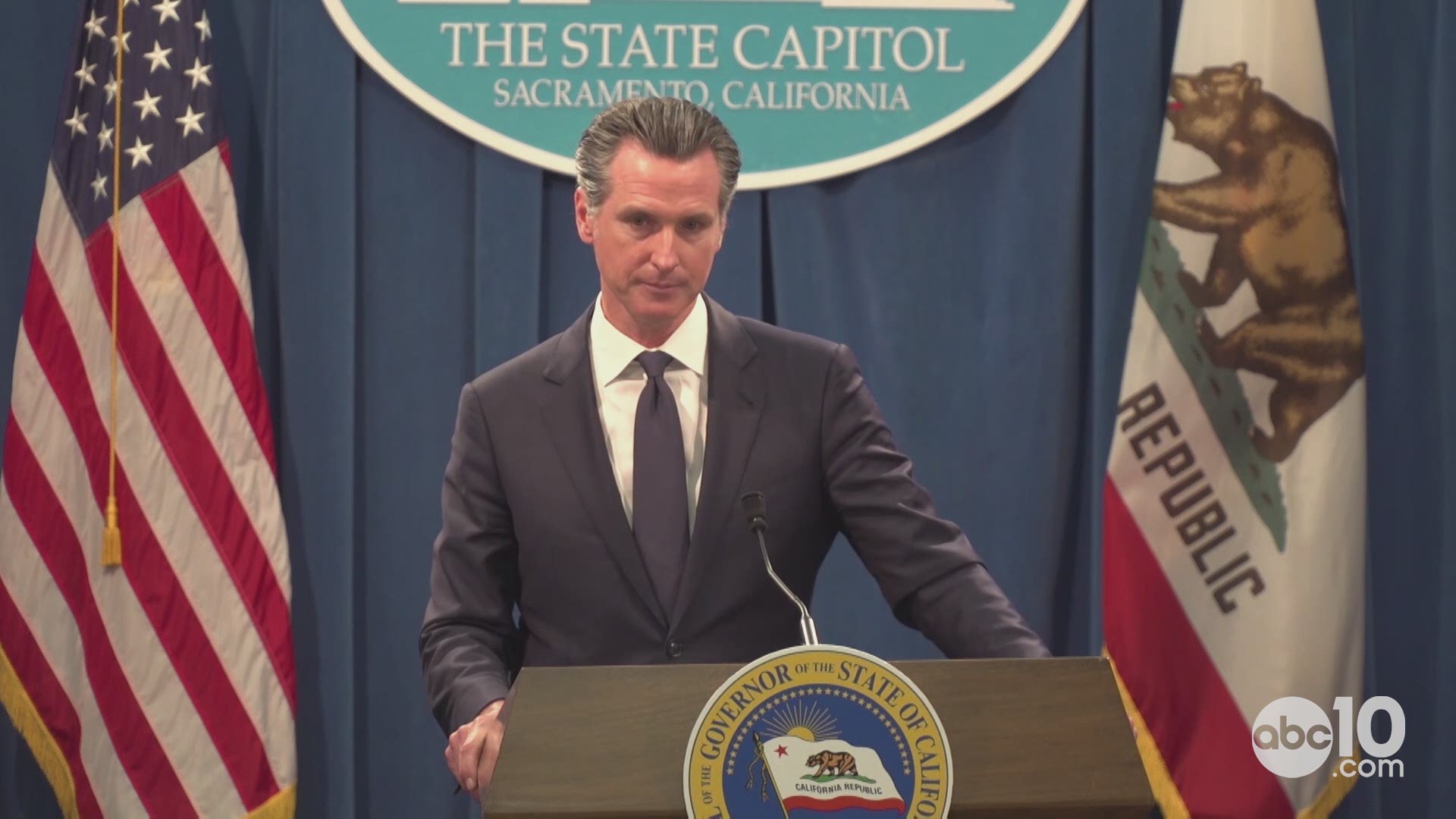 SACRAMENTO, Calif. — Rep. Katie Hill, the millennial Democrat from the Santa Clarita Valley, is quitting Congress —but she isn’t going down without a fight.

“I am leaving because I didn’t want to be peddled by papers and blogs and websites, used by shameless operatives for the dirtiest gutter politics that I’ve ever seen and (by) the right-wing media to drive clicks and expand their audience by distributing intimate photos of me—taken without my knowledge, let alone my consent—for the sexual entertainment of millions,” she said today in her final speech on the House floor.

Hill said she’s resigning tomorrow, after details of her sexual relationship with a campaign staffer—and a humiliating montage of corroborating photos—were posted online. Although she has apologized for her “inappropriate” relationship with the campaign aide, she is also taking aim at the conservative political blog RedState and the British tabloid the Daily Mail, which first published the photos. (She denies having an affair with a congressional employee, first reported by RedState.)

“I am leaving,” she said today, “because of a misogynistic culture that gleefully consumed my naked pictures, capitalized on my sexuality, and enabled my abusive ex to continue that abuse, this time with the entire country watching.”

But lawyers who specialize in cyber-harassment and the First Amendment say Hill’s case may be complicated by the limits of California’s law, the inherent difficulties of criminalizing speech of any kind and the fact that she is a public figure.

Her imminent departure has buffeted the state politically, triggering a round of political musical chairs as Democrats and Republicans across Los Angeles County jockey to fill the electoral hole she is soon to leave. Among potential candidates: former Trump campaign aide George Papadopoulos, fresh from federal prison.

It’s also the first stress test of a new sexual harassment policy enacted on Capitol Hill last year after a spate of allegations against male members of Congress. Before she declared that she would be resigning, the House Ethics Committee announced that it would be investigating Hill for a possible breach. The new rules prohibit relationships between members of Congress and their staff—perhaps including campaign staff.

But the scandal has also provoked a new, public discussion of “nonconsensual pornography.” Given that California was the first state to address this form of high-tech harassment in its penal code, it’s a conversation the state has had before.

As political scandals go, it’s hard to think of one that is more of-the-moment—or better designed to befuddle the older-than-millennial set.

It features both 21st-century sexual politics (unlike the scandals of old, the central character in this one is a 32-year-old polyamorous bisexual woman) and the definitively 21st-century technological danger of having one’s most intimate moments go viral.

Hill has suggested that Kenny Heslep — with whom she is locked in a bitter divorce and whom she referred to as “abusive” — was the initial source of the photos. Buzzfeed reported that Heslep apparently told his father that his computer was “hacked,” though he was also reportedly offering to provide details about his relationship with Hill to a local podcaster prior to the publication of the photos.

“I have been told that people were angry when I stood strong after the first article was posted,” Hill said today, “and that they had hundreds more photos and text messages that they would release bit by bit until they broke me down to nothing, while they used my faults and my past to distract from the things that matter most.”

Heslep has not responded to various press inquiries, and his attorney has not replied to CalMatters.

But the scandal is also definitively 2019 in the disparate ways that liberal and conservative media have responded to the news. Not only is there disagreement over the proper moral reaction to Hill’s actions, there isn’t even agreement on what the real scandal—or who the real victim—is.

According to one side, the focus ought to be on the allegedly improper relationship with a staffer and the hypocrisy of a party that most closely aligned itself with the politics of #MeToo.

The outrage from the other side focuses on the provider and posters of the photos, the perceived double standard implied in how female politicians are treated more harshly than their male counterparts, and the “chilling effect” this could all have on other would-be candidates.

“When we look at attacks against women running for office and how hyper-sexualized it is, that was happening before social media,” said Melanie Ramil, executive director of Emerge California, which trains Democratic women to run for office. But, she said, the threat is compounded for younger candidates “who grew up in a place where most of their lives are on an online platform of some kind.”

Canella’s bill was backed by both victim rights groups and state law enforcement. Though the American Civil Liberties Union initially opposed the proposal, it eventually backed off and the bill passed with near-unanimous, bipartisan support.

Now a U.S. senator and Democratic presidential contender, Harris has taken the cause to Washington, introducing a bill that would make nonconsensual pornography a federal crime. Democratic Rep. Jackie Speier of San Mateo has introduced identical legislation in the House.

In the past six years, 46 states and Washington D.C. have followed California’s lead, according to a tally by the Cyber Civil Rights Initiative. Many have gone much further.

While the criminal statute in California is a misdemeanor violation, carrying a maximum penalty of 6 months in jail and a $1,000 fine for each count, more than a dozen states allow for felony charges that can carry years of possible imprisonment.

READ ALSO: What do 2020 Democrats say about California fires? Not much.

A misdemeanor, and hard to prosecute

Elisa D’Amico, co-founder of the Cyber Civil Rights Legal Project, which provides free legal assistance to victims of nonconsensual pornography, said that even in states with the most aggressive laws on the books, there are inherent difficulties in prosecuting this type of harassment.

Technological changes—say, the development of “deep fake” technology—means criminal codes and law enforcement agencies are constantly playing catch up, she said. Police departments may also lack the training or expertise to deal with crimes that are both technically complex and emotionally fraught.

And then there’s the fact that much of this is taking place online.

“The Internet is boundless, so you have jurisdictional problems,” she said. “Law enforcement will often ping pong victims around, even within one state.”

Another challenge specific to California: prosecutors here must prove that someone who shared private photos or videos of someone without their permission has done so with “malicious intent.”

And particularly in the case of a public figure like Hill, that can be a very difficult thing to prove, said Louis Tompros, who lectures on technology and the law at Harvard.

Tompros said that courts would probably be loathe to distinguish between “real” news organizations and those with less civic motives.

The line is particularly blurry in case of Hill, whose victory over GOP incumbent Steve Knight in 2018 was part of a nation-spanning “blue wave” that pushed some of California’s most long-standing Republican bastions into the Democratic column.

Joe Messina, a right-wing radio show host in Santa Clarita, appears to be the first to have publicly reported on the cache of photos. On October 17 he wrote that he “received over 700 images, pictures, texts, and notes on the escapades of one Katie Hill, both before and after her election.”

But Messina is also a local politico in his own right: He’s assistant treasurer and former chair of the Santa Clarita Valley Republicans and sits on a local school board.

The day after Messina’s post, Jennifer Van Laar, deputy managing editor for RedState, published some of the pictures. The Daily Mail put up many more a few days later, identifying the campaign staff member by name and, unlike RedState, doing nothing to obscure her face. Van Laar was one of three bylines on that story.

But Van Laar, who has also worked under the name Jennifer Knight, isn’t a traditional journalist either. Like Messina, she has a lengthy career as a local Republican political operator.

Van Laar co-founded two political action committees: the Save California PAC, which is focused on fighting voter fraud and eliminating public benefits to undocumented immigrants in the state; and a group supporting the recall of Simi Valley Councilwoman Ruth Luevanos.

She volunteered for the campaign of Suzette Valladares, a Republican who announced plans to run against Hill in 2020 before jumping into the adjacent Assembly race. In an email from early August, she claimed to be “coming on as” campaign manager, but a spokesperson for Valladares’ current campaign said she was never more than an unpaid volunteer.

Van Laar has also publicly claimed to have worked for both Steve Knight (no relation) and a Republican Assembly candidate, Jarrod Degonia. She did not respond to multiple requests for comment.

This is not the first time Van Laar has been at the center of a Simi Valley political scandal.

While working for DeGonia in 2016 she accused Dante Acosta, a fellow Republican and a former member of the Assembly, of sexual harassment. Acosta, one of DeGonia’s opponents in the race, denied the allegation.

At the time, his opponent Christy Smith, now a Democratic member of the Assembly, told the Los Angeles Times that she found Van Laar’s allegation about Acosta “shocking, horrifying and utterly disqualifying.”

Smith is now the likely frontrunner among Democrats to succeed Hill.

In her final act as a member of Congress, Hill cast her vote to move forward impeachment against President Donald Trump.

“Thank you,” she said, “and I yield the balance of my time for now, but not forever.”

WATCH MORE: Gov. Newsom threatens possible PG&E takeover if no plan is made